The Biggest Threat to Marriage Equality is Apophis

The Supreme Court's decision isn't enough to save us from killer space rocks.

In a landmark decision yesterday, the United States Supreme Court ruled that same-sex couples can marry nationwide, a move that many see as a cause to celebrate, and others see as a cause to bemoan. This is understandable, seeing as the topic of "gay marriage" has been in the political lexicon for nearly 30 years, with debates raging around policies such as the 1994 "Don't Ask Don't Tell" ruling (and its 2011 repeal) or the Defense of Marriage Act in 1996 causing quite a stir.

But as the celebrations erupted across the country, I found myself troubled by what I saw as undue and even premature jubilation. You see, while millions are celebrating the most important decision made by the SCOTUS on a social issue in decades, they weren't looking skyward, in the appropriate direction of the real threat to marriage equality and social justice itself. 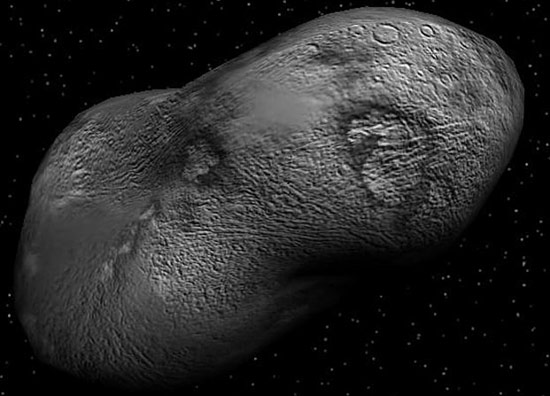 Our biggest threat to social change is as rock hard as ever.

The apparently NOT infamous Apophis asteroid was discovered in 2004 by a trio of intrepid scientists—Roy A. Tucker, David J. Tholen and Fabrizio Bernardi—at the Kitt Peak National Observatory, when they saw the 325-340 meter rock passing a mere 8.5 million miles from Earth. While the statistics have been modified over the years, the scientists initially determined that Apophis reached a level 4 on the Torino scale—as in a greater than 1% chance of impact in the near future. And of course, during this time, social justice—in the form of gay marriage—was a hot topic among the candidates for the upcoming 2004 presidential election.

But did this recent discovery of the biggest danger to social justice even warrant a mention?

Every time we pat ourselves on the back for these victories in social justice and equality, we miss the big picture of equality's imminent demise-by-celestial-body.Of course not.

Perhaps if Howard Dean had remained in the race, his progressive perspective might have allowed him to see the real threat Apophis posed. But all that could simply be a pipe dream of this aging liberal. Their spirits may be broken by Big Money, but I take comfort knowing that the few truly progressive candidates remaining probably know that social progress-killing rocks orbiting our sun are where the real battle for justice will be fought.

In the year 2029, NASA scientists estimate that there is a statistically significant chance Apophis could pass through an 800-meter gravitational "keyhole," altering its orbit enough to cause an impact seven years later in the year 2036. Are the future rulings of police de-armament and mandatory body cameras leading to more accountability in their duties going to matter one fig when a killer tsunami is rushing our way?

Somehow I doubt it.

This ruling on marriage equality is certainly a victory, but it's not nearly enough to stem the tide of global injustice wrought by killer rocks circling our solar system. We will probably see many victories similar to SCOTUS's marriage equality decision, but I guarantee that if you're really paying attention, those victories will be as hollow as the moon.

Imagine, if you will: a Congressional mandate that ensures equal pay between men and women, and provides more protection for rape victims, upheld by the Supreme Court! Guess what: Apophis will still be there. Imagine that we solve the food crisis in Africa by establishing and protecting farms from local warlords! Apophis: still there. Imagine that we eliminate drone strikes in the Middle East and still manage to decimate ISIS through Special Forces tactics! Oh, hi Apophis, how's it going?

Every time we pat ourselves on the back for these victories in social justice and equality, we miss the big picture of equality's imminent demise-by-celestial-body; we don't understand that the fight has only just begun. Until we learn to accept that our concepts of social justice are more than just complex, multi-faceted issues, and admit that killer space rocks are the biggest part of the problem, we'll never find effective, long-term, and all-encompassing solutions to these issues.

We may have won this victory in Washington yesterday, but we won't be able to run and hide in Canada when Apophis comes knocking at our door 21, 53, even 5 years from now.

Related
Dracula Regrets Opening Up His Marriage
Michael Labrecque
I’m Afraid Audiences Watched “Star Wars: The Last Jedi” with the Unrealistic Expectation That It Would Save My Marriage
Clayton Moore
A People’s History of My Failed Marriage
Samuel Rose
Life-Threatening Situations to Mark Yourself “Safe” on Facebook
Connor Relyea
Resources