Album Review: "Let Me Touch Him" by the Minister's Quartet

Meet the Minister's Quartet: the first guy on the left is Grandpa, 007… 3648. That's his registered sex offender ID number. Next up is Ricky. He's lost a little weight since his work in the film Better Off Dead, proving you can take the pedo out of the fat, but you can't take a fatty from a pedo, especially if they bribed said fatty with candy. Next up we have Jim "Broken Hip" McAllister. There's nothing to say about him or the other jackass with the vacant stare on the end. They're just along for the ride. 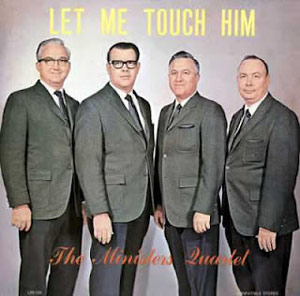 This is Larry, my brother Daryl, and my other brother Daryl… that other guy is Daryl too, but fellow inmates call him Sweet Sally.

Together, these four holy men created one of the most historic albums ever to grace vinyl. Since its release, "Let Me Touch Him" has garnered a plethora of awards, including weirdest album cover, worst album cover, gayest album cover, and the esteemed "gay album cover is gay" award. But despite the predominance of list appearances, not much has been said about the tracks, which is a shame, because there are some real treats on this album, particularly the title track "Let Me Touch Him," and the first song on the second side of the album, "Palms of Victory."

Trivia Question: How many albums did the original Minister's Quartet release?

"Let Me Touch Him" 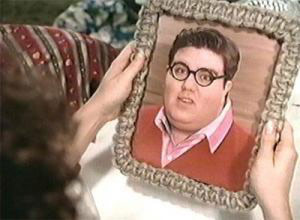 That's him! That's the guy who asked if he could touch me!With this song title, the "who?" is apparent. They want to touch him. But many questions are left unanswered. Questions like, "Where, where do they want to touch him?" "Why do they want to touch him?" and finally "What the fuck?" Since social conventions are pretty lax when it comes to touching people anywhere but the genitals and mammary glands, you have to assume that, since they're asking permission, they're probably hoping to get in your pants or under your shirt. The consolation is that in their old age they've grown kind or fragile enough to ask, which means you should be able to outrun them. Just don't let them surround you.

Ah, palms of victory. I remember them well. Christine Newstead said she'd go to prom with me back in high school, but the seedy hotel reservations I made for later that night caught her off guard. She wanted to go home. So I dropped her off and went back to my house to "take care of some things" instead of sticking around to eat chocolate chip cookies with her parents. And when I got home… palms of victory.

A few years later, word of my neighbor sunbathing in a bikini on her rooftop got around. I never mustered up the courage to talk to her. But my failure to socially interact was a staggering victory for the palms. And that was okay by me, because when your palm's involved, everyone's a winner. Nobody walks away with an STD, there's no risk of pregnancy, and there's no awkward post-sex "what do we do now?" scenario.

The good news about this song is that, when heard in sequence with the others, we can safely assume that whoever these old perverts wanted to touch said, "No way in hell." There are no palms of victory without rejection in some capacity, after all. So at the very least we can take solace in the fact that the lust these men felt was unrequited.

Here's hoping the palms of victory are still serving the original Minister's Quartet well, and continue to do so for years to come.