Even mental and physical aggression has its place in higher education.

Bullies are an essential part of life. I didn't enjoy being forced to drink sewer water, but now I know what it tastes like. All the punches to the face prepared me for the agony of being clawed in the face by an angry Puerto Rican girlfriend. And after being sprayed in the eyeballs with a can of bear mace, I stare at every ounce of passing cleavage not giving a damn if I'm caught.

Bullies make life precious. They force you to cherish the little things and give you a deep appreciation for discipline. When I graduated from high school, I felt my tormentors had bestowed a great gift upon me. Not only was I spiritually enlightened, but I had developed quick reflexes, a high tolerance for pain, and a batch of repressed emotions that gave me a lady-seducing Clint Eastwood grimace.

I had turned the football team from a bunch of useless upstanding gentlemen into a squad of responsible mean brutes. I was excited for college. I thought college would be host to a new breed of bullies. I was expecting massive wrestlers throwing barbells at me. I thought Mafia children would force me to write their essays or else chop my fingers off. I was even hoping there were engineers who built evil robots programmed to give me robotic wedgies.

So I entered freshman year ready for some major personal growth. I instinctively cringed while slinking through the hallways waiting for the inevitable Taser to the face. I constantly ducked my head in class thinking that someone would try to suffocate me with their backpack. I waited and waited for the bullies but nothing happened. What was wrong with this campus?

I got depressed. I missed the adrenaline rush and the sense of belonging to something important. I needed danger in my life. I was no longer planning elaborate escape routes, but instead focusing on writing boring essays. I was so disoriented that I adopted a Ukrainian child named Bohdanko, hoping he would bring joy to my life. But he was just another Ukrainian spy, and soon departed without so much as a goodbye hug.

I decided to create come bullies by bullying others. I figured that the people I bullied would turn their frustrations on others and then it would cycle back to me. I began throwing laptops and cell phones in the fountain and hooking up desperate virgins with lonely transsexuals. I rearranged entire sections of the library and handed out counterfeit condoms on International Condom Day. No one seemed to react, and the only difference was that there were more pregnant women barfing in class.

Frustrated from failure, I decided to throw rocks at the football team during practice. I was rewarded with a fabulous beatdown. They seemed to be confused, but I knew I was awakening their inner bullies. I continued bombarding them with rocks and they continued beating the shit out of me. Eventually I didn't even have to throw rocks anymore; my presence alone would incite a beating. I had turned the football team from a bunch of useless upstanding gentlemen into a squad of responsible mean brutes. 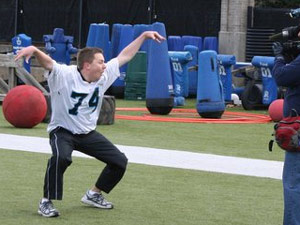 My football bullying got so intense that local media followed me to practice one day to cover my antics. Fortunately, that was the one day I wasn't abused. My plan worked and I had my first bullies. My leisurely strolls to class ended and I was suddenly trying to outrun varsity athletes conditioned for extreme malice. It didn't help that we were in the same class, seated next to each other. But it was what I always wanted, and I soon relished the constant bullying. The adrenaline rush returned, and I was blessed with newfound energy. I put it to good use by making several quilts that won top prizes in the campus arts and crafts fair.

Soon after, people recognized the benefits of college bullying. They saw how I had transformed from a sluggish bore into a man with immense character. People wanted to get bullied too. Others saw all the fun the football team had beating me up and wanted to join in. Bullying spread like crazy.

Every bullied freshman turns into a confident sophomore. Every issue of class, race, and sexual orientation was used as an insult and you were either laughing or crying. Physical and emotional abuse was prolific but there was nothing quite as mean as ripping off someone's scarf and throwing it into a mud puddle. Art students insulted each other's poetry with such passion that most of their free-trade coffee was being used as a scalding hot weapon rather than as a revolting hot beverage.

It even affected the esteemed faculty members. Professors would be hobbling along on their canes, pretending to be deep in thought, when a careless student would pass and the cane would smash against their shins. Professors would also blind students with their laser pointers and force them to give speeches on difficult subjects such as surf culture in Romania. Professors with tenure were the most deplorable, and many would stalk the dormitories spreading their peculiar odor everywhere.

I ended the year a happy man. I had forged something beautiful on campus: a symbiotic relationship between bully and victim that was full of mutual benefits. The quality of college life had increased dramatically. Those who were bullied learned tough lessons that no aspect of higher education could provide. And the bullies were finally given an outlet for their frustration without fear of persecution. I even dated a mean-spirited wench who made me feel terrible almost every minute of the day.

I am proud to say that college bullying is still thriving on my campus. It has developed into an elaborate tradition with its own vernacular and customs. While once seen as immature and stupid, there have been a few scholars who have praised its existence. Every bullied freshman turns into a confident sophomore, full of exciting ideas for new forms of bullying. A senior student can spend hours bragging to a cute girl about all the students he has humiliated and most likely end up marrying her.

If your campus lacks bullies and you are dissatisfied with life, take on the responsibility of a bully. The chemistry student you constantly torment may discover a new artificial sweetener that will blow your mind. Just remember that the bullied kids of today will become the dashing heroes of tomorrow.