6 Things I Can Do That Michael Phelps Can't

Listen man, you may be golden, but I've got some sweet consolation prizes.

The U.S. is in the midst of gathering Olympic medals like a mosquito collects blood. Michael Phelps, the half German/half shark "Baltimore Bullet," has continued to dominate the pool as always, bringing his total medal count to a record 1,673 gold, 1,219 silver, and 2½ bronze. Though his superior respiratory system includes a combination of larger than normal lungs and gills located behind his earlobes, making him the perfect specimen in and out of a Speedo, there are, however, still some things I can do that Michael Phelps can't. Here are six of them. 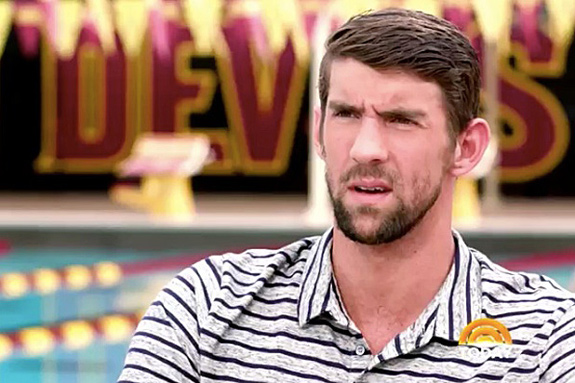 Phelps may be able to cut through the water like a barracuda on crack, but can he stand in the middle of a dance floor, plug his nose, and wiggle himself down until he's resting on his heels? I dare say his lanky arms would make him look downright foolish. I, on the other hand, am built like a sea star, allowing me to dance the 1960's craze with grace and agility. In fact, I wouldn't doubt that I could best Phelps at a "mashed potato" contest either—dancing or eating.

2. I can look my kids in the face, comfortable knowing I did not name any of them "Boomer."

As the son of an Olympian and a former Miss California, Boomer Phelps possesses the genes of a Greek god and whatever mere mortal Poseidon chose to mate with. I'm sure whatever profession that boy wanted to pursue, he could succeed at. However, a name like Boomer puts constraints on a boy's potential careers. Might I suggest pro-wrestler or 1980's hair band drummer?

3. I can smoke weed and not end up on the cover of a tabloid.

I also am not contractually obligated to get the munchies at Subway afterward.

4. I can run my fingers through my luxurious arm hair.

As a recreational swimmer, I am not forced to shave my arms before I enter the pool. While Michael must remove all that drag-inducing forearm fuzz, I am free to let mine grow wild. Note: Many of our other areas go through similar hair-removal, however.

5. From this day on, I can wear a hoodie without people saying, "Remember when you wore that in the Olympics and people made fun of your game face?"

Which is a good thing, because I wear hoodies all the time, frequently giving my opponents the stink-eye at the same time. Of course, most of my adversaries are the people who take my favorite table at the local coffee shop, but because I never have an array of cameras on me, I will not become a meme while doing so.

6. I can float on a noodle without getting a single look from anyone else in the pool.

Imagine, if you will, Phelps walking down the steps of his hotel's pool, grabbing one of their noodle floats, sticking it in his armpits, and leisurely floating off into the deep end. Every phone in site would immediately be aimed at that beautiful Olympic body lounging on a child's flotation device. Me, however, I can paddle around all day with a noodle (maybe even three) under me without a second glance. It's that believable.

Related
I’m You 30 Minutes from Now and I Definitely Regret Going for That Run
Geoff Waite
Seven Mishaps at Whole Foods That, Looking Back, Were Only Partially My Fault
Nikki Campo
Gifts from a Childhood Friend That Hint at Long Simmering Resentments
Angela Kidd
“Carpe Diem” and Other Things You Cannot Do
Fletcher Michael
Resources