13 No Shit Tips for Nailing a Job Interview

Know when to shut up, and only be about 38% yourself.

I believe there are two groups of people: those who are naturally awesome at everything they try, and those who are awesome, but struggle to achieve even a fraction of what the other lucky bastards achieve without lifting a finger. The former consists of The Most Interesting Man in the World, Ridiculously Photogenic Guy, and Morgan Freeman. The latter is the rest of us. (Sorry, you're probably in that second category.)

While, for the most part, there is nothing inherently wrong with the functionality of our head meat, we may still do or say things that are pretty stupid and ruin our chances for success. Instead of just lifting a finger of our own at the lucky group, we should probably work harder to avoid silly mistakes that land us in a heap of self-pity Cheeto dust.

One of those times you should always be on your game is the dreaded job interview.

You want a job? Then you'd better follow these surprisingly neglected tips (and you should never neglect the tip). 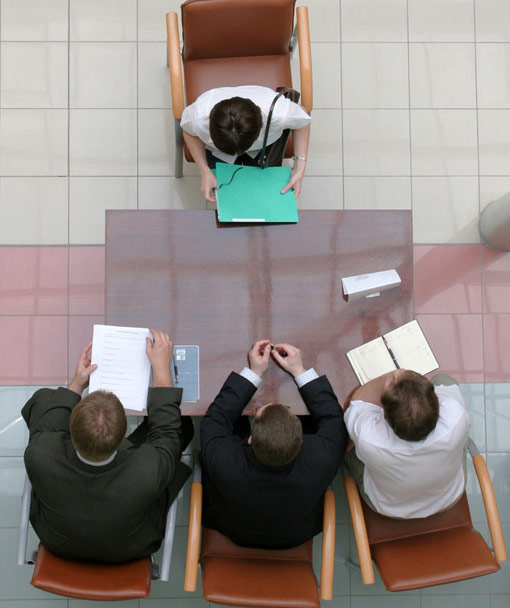 This may seem like a catch-22, but you need to look like you already have a job when interviewing for a job. The only time you disobey this rule is at the direct request of the interviewer. I once interviewed for a dog daycare supervisor position, and was told to wear pants that I didn't mind being slobbered on. They were still nice jeans, but I downgraded from my usual black slacks. (Note: If an interviewer requests this, and you're not interviewing for a dog-related position, run.)

2. Turn Off Your Phone

You're rolling your eyes right now. I can feel it. But people leave their phone on a lot. Not only is it rude and distracting, but leaving your phone on to fart every time your buddy sends you a picture of a dump he just took that looks like an angry Jay Leno makes you look like you can't handle the responsibility of a flipping burgers. Turn it off.

3. Prepare for the Inquisition (and not just the Spanish one)

You think you're charming, smart, and sexy enough to wing an interview without getting cold stares? Not likely. Even if you are spontaneously awesome with friends and hot chicks (or dudes) at the pub, this is not a liquor-lubed social call. Go through all the questions and scenarios possible in a job interview and prepare your calculated response. Be about 38% yourself. Do you think Bob Saget got the role of Danny Tanner by doing his raunchy jokes? Not likely. Tone it back a bit and prepare.

4. Don't Do Drugs Before the Interview

This includes the night before. Most adults can tell when you're hungover or strung out, and it's neither pretty nor impressive. You also will not perform at your best. Some drugs are OK. If you're bipolar, take your meds. Caffeine is acceptable in moderation. Make sure you're not tweaking while trying to convince someone that you're calm under pressure. Nicotine is OK, so long as it's from something you can't reek of. That means e-cigarettes, gum, and the patch. Cigarettes make you smell like a Russian whore house. Patching it up with cologne makes you smell like a French whore house. Wait to smoke, drink, and/or shoot-up until the interview is done.

"Early is on time and on time is late." And late is blasphemy. If you're ever barely on time or late, you better hope you're as charming as you think you are or they're as forgiving as the Pope for pedophiles.

6. Don't Drink or Eat in Your Interview Garb

7. Know What You're Applying For

How are you going to be the right person for the job if you don't know what the job is? This means taking the time to Google what the position is, what is expected of the person hired, and figuring out how your talents or skills apply. Go for your more professional experiences. No one wants to hear about your organizational and problem-solving skills based on that five-foot-tall castle you built out of Lego blocks.

Even if you have to fill out an application. Your resume is more professional and provides more information.

Keep it simple, readable, and preferably crease- and stain-free. Tailor it to the position you're going for. For instance, I've worked for many animal clinics, but specialized in television news broadcasting. When I apply for an animal clinic, I emphasize all the duties I was responsible for in the past. When I apply for a TV station, I de-emphasize my doody duties and keep these portions short and to the point. Again, list your achievements and skills only as they apply to this particular position. Include the Lego castle only if you're applying for a Lego Master Builder position (yes, that actually exists).

Badmouthing past coworkers, bosses, and companies makes you look like a dick. You're basically gossiping and complaining, and no one likes someone who does that. The interviewer might feel like you'll do that to them. Plus, they might be golfing buddies with that "douche" ex-boss of yours. On another note, you know that guy who says that every problem was someone else's fault, or that everyone else is an asshole? Usually, that guy is the common denominator and he's the asshole. Now, you're not an asshole, are you?

13. Know When to Speak and When to Shut Up

When they ask you a question, answer it. But don't answer, then go flaccid. Keep your answer direct, but conversational. Add to the answer with some spiffy examples or an anecdote of you being awesome. If you can make them laugh (with you), all the better! (Don't try too hard, though. Some people are just too damn tired, busy, or stiff for humor.) But when they're talking, shut the hell up. Don't interrupt. Pay attention. Then, when they're finished, ask questions. Most interviewers will prompt you to ask questions. But having a prepared and spontaneous, genuine question about things discussed or left out is crucial.

Remember: You may be sweating it to prove that you're worthy of this job and can offer them something they need, but they should also prove to you that this is a company worth working for. You may feel like you have to whore yourself out like a two-dollar Vegas hooker to land a decent gig, but you don't have to work for anyone won't treat you like a decent human being.

Unless, of course, you're not a decent human being. Then you may have to just suck it up.

Me: So anyway, that’s why Jake and I aren’t talking anymore, because of that thing I said about Jason, and now it’s like where do I go from here, you know?
My Gynecologist: So, I’ll just mark “No” for sexually active then?