In between stealing ideas, Edison electrocuted elephants and poisoned a man with radiation.

I am a man of science. A man of history. A man with a functioning nervous system and basic access to Google. I once skimmed through a philosophy textbook, and came out the other side a lot less tolerable at parties. I pursue knowledge where there is knowledge to be found. And in these pursuits of knowledge, one thing has become abundantly clear: Thomas Alva Edison was a massive hairy butthole. Like, so massive.

Thomas Edison exuded hatred, greed, and asshattery like a dead, bloated walrus exudes postmortem gas buildups. That is to say, constantly, putridly, and with a complete lack of sympathy for anyone caught downwind from the incessant, unceasing filth of it all.

I re-watched Oz the Great and Powerful the other day because I was drunk and lack good decision-making processes after the fifth vodka sunrise. And other than making me lose even more respect for two actors that I really want to like (Mila Kunis and James Franco), I was reminded of the scene where Oz references Thomas Edison in order to inspire some bullshit or another. Fuck if the specifics are important. Basically he's like, "There was once a man, who was soooooo awesome…" and that's bullshit. Edison never did anything worth mentioning, other than setting records for the multitude of ways one person can be a wad of fuck. And since I don't have anything better to do this afternoon, I'm going to go ahead and ramble incoherently about Edison for a while, and how much he sucked.

Oh, and sorry for reminding you about Oz, again. That was rude of me. 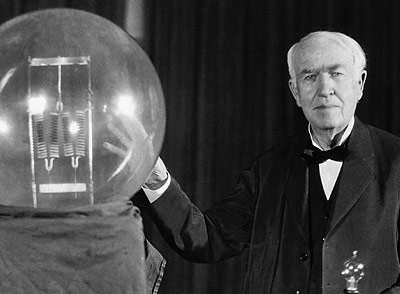 "This should be practical for the living room, right?"

You might remember a small little tiff that some people decided to call World War I. It happened a while back. Maybe you skimmed over it in a history book once.

Anyway, this was about the time that genius and unsettlingly sexy pigeon enthusiast Nikola Tesla was busy being about as awesome as humanly possible without teaming up with Batman. While he was busy doing this, he invented a lot of impossibly useful things, among them, an early version of radar. You know, the thing that lets us know planes and such are on their way without having to position a dude with binoculars on every rooftop.

That invention would have given the Allies an absurd advantage…

…had he been allowed to implement it.

You see, the head of R&D for the United States Navy at the time was none other than Thomas Alva Goddamn Edison. And when Tesla approached him with his proposal, he was met with not so many "open arms," but more, "stiff middle fingers."

That's right, Edison blocked the production of radar. The use of which could have saved countless Allies' lives. The advanced warning it could have provided the Allies would have been an insurmountable advantage. Granted, the war still wouldn't have been rainbows and puppy dogs, but still.

This sounds like something so needlessly evil and unnecessary that it's easy to envision Edison building his workshop on top of a skull-shaped volcano. Which he probably would have done, had 80's cartoons been invented yet, so that he could have ripped those off too.

Thomas Edison and Nikola Tesla where locked in a war over DC and AC power, and each tried to prove which one was superior. AC was, by a long shot, since it didn't require a power plant on every block, and was generally more efficient.

But Edison wouldn't have none of that bullshit.

He paid children twenty five cents apiece to bring him neighborhood animals, cats and dogs mostly, so that he could electrocute them using Tesla's AC current, somehow feeling that that would discredit it as a viable power source.

Not content with merely murdering small animals, Edison decided to use the power of AC to bring down an elephant.

I refuse to link to it here, but video of the event exists, if you feel like ruining your entire fucking goddamned day.

This article could easily have been titled "Awesome Shit That Tesla Invented and Edison Fucked Up," but I felt the need to communicate Edison's douchebaggery right in the title.

One thing that Tesla played an extraordinary role in the development of was X-ray technology. He recognized X-rays for what they were: useful, but very dangerous. Tesla tried to warn people about the danger inherent in them.

Edison, having electrocuted every animal in the tri-state area, yet wanting so badly to smear Tesla, had nowhere to turn his idiocy other than upon humans. So, ignoring all warnings, he irradiated the shit out of an employee of his, Clarence Madison Dally.

So, after Edison finally learned a valuable lesson about listening to his intellectually superior comrades and about the dangers of X-rays and he decided to…blast his own eyes with X-rays.

That's right, Edison irradiated his own eyes to the point that he nearly went blind. Later, when asked to comment on X-rays, he said the following: "Don't talk to me about X-rays. I am afraid of them." I picture Tesla, surrounded by lightning, smiling, thanking the universe for allowing at least a small amount of karma to exist.

Edison is credited with inventing everything. Ever. Lightbulbs? Yup, that was Edison. Phonograph? Edison invented that while taking a shit between curing cancer and solving perpetual motion. The George Foreman grill? The name would heavily suggest otherwise, but Edison, in all of his incandescent glory, had the foresight to envision a future full of not only marketable boxing champions, but also people in need of a fast and reliable means of making homemade grilled cheese sandwiches.

Except that was all bullshit. In case you didn't notice.

Now, there's not actually much denying it, but many of the things Edison was credited with inventing would likely never have seen the light of day, or at least not gained acceptance or gotten as popular as quickly, without Edison's marketing and massive stores of cash, but there's no other way of saying it: Edison invented jack shit.

Okay, honestly I can't be positive about everything that Edison stole, and despite what some internet enthusiasts will tell you, history is actually kind of fuzzy on some of the details. But it's generally accepted that of the thousand or so things he patented, he bought the majority from other inventors, and outright stole several.

Edison was good at selling things. And good at really, really liking money. Putting the two together, he was a powerhouse at buying things from people, claiming those things as his own, and then paying people to shut the fuck up about those things not actually being his.

Other people have compiled more precise lists about everything, with actual details and evidence to support the claims, but if you've read literally any of my columns, then you know that backing things up isn't exactly my strong suit. Some would say that I actively avoid it. They would be partly right.

But needless to say, most of his heavy-hitting inventions—the lightbulb, the phonograph, not being a big floppy wang—were not actually his ideas.

Does any of this affect your day? Not really, unless you watched that elephant video, in which case, um…sorry? Other than that, this article was just what I do when I'm not telling you a story about how stupid I can be in dangerous situations; just me bitching randomly.

Enjoy the rest of your day.