Hi there. This is Nicholas Cage, and I'm here to tell you about my latest Hollywood film project. Back in 2006 I did a movie called The Wicker Man, a movie loosely based on the movie The Wicker Man. Critics called it "a true masterpiece of cinematic genius … one of the most important films of the new millennium … a tour-de-force of nonstop lady-punching … bear suits will never be the same again."

So what's this new project, you ask? You guessed it, I'm doing a sequel. Excited? I know I am. I've been out of the bear suit for too long. I owe it to the world to make "Wicker Man 2." The wait is almost over.

Ready for an exclusive first look at what is sure to be the highest grossing film of all time? Oh yeah. It's that good. Get ready, people. The bear is back.

Scene one: I'm at the liquor store in a bear suit. There's a lady working at the counter. She says, "We don't serve bears here." I punch her in the face. Smash cut to the title of the movie.

I jump over the counter with a flying elbow. Freeze frame. 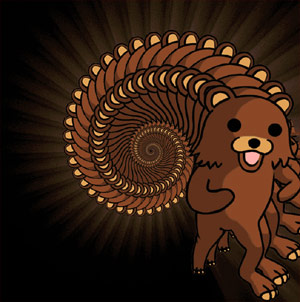 I'm on top of the clerk, punching her in the head repeatedly. I let out a deafening roar as I throw my blood-stained bear claws to the sky. Freeze frame.

I start jumping up and down, smashing liquor bottles and knocking over shelves. I throw the cash register across the room. Freeze frame.

Cut to outside. The cash register comes smashing out the window, hitting a small child in the head. The kid falls down, dropping his ice cream cone. Close up of melted ice cream on the sidewalk. Freeze frame.

Based on a fever dream by Nicholas Cage

Back inside the liquor store. I'm drinking two bottles of whiskey at the same time. I let out a drunken roar. Freeze frame.

I'm urinating on the wall and laughing hysterically. Freeze frame.

I douse the store with Everclear and set it on fire.

Cut to outside in the parking lot. I'm walking in slow motion, smoking a cigarette. The liquor store explodes behind me. Fade to black.

And a special guest appearance by Nicholas Cage as Fu Manchu.

Okay, so that's all I've got so far, but I expect to have the screenplay completed within the next three to seven hours. Principal photography will begin later this evening, and the casting call is going on right now. Are you a lady? Can you take a punch? If you answered yes to both questions, then you just might end up in my film.

Any bigshot Hollywood producers out there reading this? You're in luck! "Wicker Man 2" needs financial backing. Don't miss your chance to be a part of the magic. The budget is currently at $175, but in order to pull this thing off I'll need to spend ten times that much. Trust me, you want to be a part of this. Don't let the opportunity pass you by.

And don't worry, I have my own bear suit, and I can't wait to start mauling people again. I just need someone to film it, and someone else to pay for it. If interested, please call my cell phone, day or night. I know you guys all have my number. I'll be waiting.

If Shakespeare knew that more than 400 years after his death, people would still be enjoying his work, would he be happy? Or would he be mad because we still haven’t invented flying cars?