Stop remaking awesome movies and start with these 8 shitty ones instead.

It's no secret that Hollywood has been cannibalizing itself for years now. I speak of course of the endless stream of remakes that have plagued theaters for the past decade. It's a fairly consistent formula: 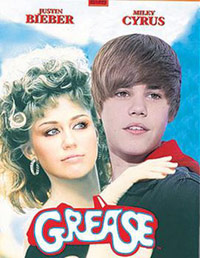 But the main problem with this is not the second step, it's the first one. We need to stop raping my childhood by trying to remake awesome movies that I grew up on, and start remaking the ones I don't give a shit about so you can change them all you want. I've come up with a list of the top movies I'd like to see rebooted, despite the fact that I have never seen the original movie and/or completely despise it. It's time to take Hollywood back.

Watch the fantastic adventures of a remarkable simpleton named Forrest Gump (Benicio Del Toro), his good friend Captain Dan (Johnny Depp pretending to be Hunter S. Thompson, but with no legs), and his girlfriend Jenny (Christina Ricci, mostly naked) as they befriend a village of magical gnomes and travel into outer space in a hot air balloon to save Christmas by going back in time and assassinating Richard Nixon. Gump says many wise and quotable things. May or may not be a drug dream.

Written and directed by Rob Zombie (House of 1000 Corpses, The Devil's Rejects).

Starring the black dude from Candyman and the Final Destination films as every single character, aside from a cameo by Sid Haig as the wacky mailman. Rated R.

Starring Samuel "I'm tired of all these motherfuckin' snakes on this motherfuckin' plane" Jackson and Jaime Lee Curtis. Miss Daisy (Jaime Lee Curtis) is a racist serial killer. Despite her deeply ingrained bigotry, she befriends her black chauffer (Samuel Jackson) who shows her the joys of killing white people. Because they are all shape-shifting aliens. Also, it's post-apocalyptic. Special appearance by Kurt Russell as Snake Plisskin.

Starring it doesn't matter because everyone dies horrifically. Put Lindsey Lohan in it, who cares. Special appearance by Doug Bradley as Pinhead. Rated NC-17 for extended scenes of graphic violence and perversion.

Five separate screenplays are spliced together: Ridley Scott, George Lucas, Steven Spielberg, James Cameron (he gets a do-over), and the Wachowski brothers. Produced by Jerry Bruckheimer. Directed by Michael Bay, with all of the boring touchy-feely Oscar-bait parts (I'm looking at you, James) replaced with massive explosions.

Starring Steven Segal (old as fuck action hero) and Nicki Minaj (escaped government android cloned from hybrid DNA of Lil' Kim and Lady Gaga). Minaj gets naked in one scene. Then they fight some terrorists and a Kraken. The ship turns into a robot and fistfights an iceberg at the end. The iceberg is full of aliens. The aliens kill all the passengers. In 3D.

The legendary Grindhouse duo of Quentin Tarantino and Robert Rodriguez team up once again for this re-imagined tale about a call girl (Salma Hayek) who falls in love with a rich man (Charlie Sheen) who offers her a better life and free drugs. All that stands in the way of their love is a pack of kung fu lesbian vampires with machine guns for legs. The extended cut of the film features a seven and a half hour car chase scene.

The plot has something to do with Bruce Campbell fighting werewolves with a chainsaw in an Indian burial ground. And he falls in love with an Indian girl or something. Native American, whatever.

Roger Corman presents a John Waters film starring George Takei and Kirk Cameron as cowboys who stumble upon a strange and fabulous prehistoric world deep inside an unexplored mountain cave full of dinosaurs, leather clad S&M dwarves, and killer trannies. Features a delightfully awkward scene of Kirk Cameron being gang raped as Takei rubs one out. Oh my.