This however is NOT your typical alcohol-themed article. This is for various reasons. 1. Most of the time you'll find people bragging about their inebriated exploits or telling some WILD story. I am very much a “just starting out” drinker, and don't have much in that department. 2.

Oh and 3. I do funny dialogues at the end… I don't know. Does anybody still like those?

Well at least one person does since they stole them for use in their own weekly column. 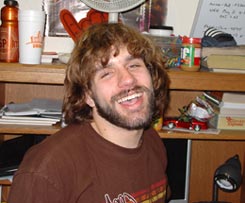 Am I drunk? Maybe, but keep in mind: the camera adds ten beers.

Attend the average social gathering where beer or liquor is present and you'll soon run into some sort of discussion, argument, or bare-chested brawl over whether liquor or beer is better. Once that is settled, there will be another to determine whether THIS beer is better than THAT beer. Light vs. Dark… Taste vs. Cost… Lite vs. Regular. There are innumerable arguments to make, until the brainy kid finally speaks up and says, “Hey, all alcohol tastes terrible.” Who invited this kid? He's killing my buzz with his correctness.

Admit it, if alcohol didn't make you feel like your testes were floating, nobody would drink it… unless of course it was like coffee. In which case people would don thick-rimmed glasses and turtlenecks and go to town… while discussing the roots of an indie band they saw the night before. So as it always turns out, you're at a party clenching your jaw after every sip so as not to hurl after one beer. Right in front of you, guys are chugging the stuff like it's candy, like it doesn't taste like making out with Satan. Which will be fitting when they see him later that night after wrecking into a tree. You'll laugh smugly when you hear that, and drunkenly make out with their now single girlfriends.

Until you find out that the keg was O'Douls the whole time and these people were way more pretentious than you thought. In your now awkward state you will try to drown your uneasiness with some Jell-O shots that turn out to actually be just Jell-O, and a rum and coke in which you forgot to add rum. God you are stupid.

And you can't even blame it on the alcohol.

So you've had a few by now, right? Why not? This article would be funnier if you did, especially if your drunken state caused words to be rearranged or replaced with completely different ones. Anyways, part of the fun of alcohol is determining WHAT KIND OF DRUNK ARE YOU! I'm sure your friends can tell you… mainly because they were the ones who had to apologize for your “wants to fight everything that moves (and some things that don't)” ass. Or maybe you're the “sits quietly in the corner” type or you could be the loud, obnoxious type who tries to get the former to act wild. Are you sure you're not the fighting type? Because you're getting mad at the loud guy for stirring up trouble.

The point is, alcohol's liberating effect allows people to reveal their true self, their alter ego if you will. So a couple of shots is the proverbial phone booth into turning your Clark Kent into another Superman. Only problem is drunks are far more numerous and far less helpful than super heroes. Good job, Stare at the Wall Guy. Keep me informed on your level of intoxication, Jabber-Jaw Man. And yet we still encourage these heroes to emerge from their underground lairs. Don't believe me? How many times have you heard someone say: “I want to see what you're like when you're drunk?” Unfortunately they didn't add… “Unless you turn into a total asshole that nobody can control. Yeah we only want cutesy drunks here.”

Bet you can't guess what kind of drunk I am. Loser has to pay for the booze.

Now as bad as alcohol tastes, nobody wants to drink the same bad taste every time. Oh no, that would be redundant. So naturally you have to experiment and mix the bad tastes together and see if they cancel out. Add some sugary stuff, give it a highly sexual name, and you've got yourself a new drink and pissed off barkeeps all across the country… they wanted to get out of Bartending College in under 4 years. Anyways here are some of my own personal favorite mixes, and all the ingredients can be found at your average college party. They'll really spice up your night.

*Note: The last convo was written entirely by Drunk Mike*

More Like This
I Beseech Thee, Land-Lord, for Thy Forbearance with Rently Payments
Alex Connolly
15 Subdued Alternatives to Harsh Overhead Lighting
McKayley Gourley
Excuse Me, Do You Have a Permit for This Outdoor Proposal?
Julien Perez
Resources

I Will Funge These Tokens If It’s the Last Thing I Do
Nathaniel Brown
Excuse Me, Do You Have a Permit for This Outdoor Proposal?
Julien Perez
Think You Got What It Takes to Join Our Gang, the Crabapple Boys?!
Alex Baia
Not Funny
Tim Kochenderfer