*Dedicated to Adam, Austin, Gary, and everyone who has only put me down once or twice*

One of the best things about college is the chance to meet new interesting people and develop friendships that you will cherish for the rest of your life. The times spent with these people will be remembered for years to come, whether it's your suitemates, your frat brosephs, or a gaggle of girls that you chat with in a platonic fashion. Actually I've been meaning to ask you about that. What's going on in that situation?

The friends you make in college are a different caliber of friend, they're kinda like your high school buds… except for the fact that you've completely ditched those losers now that you don't share homeroom, and you actually enjoy the company of your new buds… for now.

Now I'd like to think that here at PIC we have a special bond. That the columnists share playful banter between sips of coffee in the lounge, and the readers are valued friends which we appreciate. That the readers are our compatriots for whom it is worthwhile to toil over whether “balls” or “berries” is a funnier euphemism for testicles, and likewise worthwhile to turn in comedic masterpieces promptly
(whoops). Sadly this utopia is not the reality. Fans will always be fans to us self-absorbed humorists….

Well, humorists like Rebello and Forest anyway. I love every one of ya'll.

But to be fair, I wouldn't necessarily call Edited for Content “Humor.”

Here's where it all went wrong. 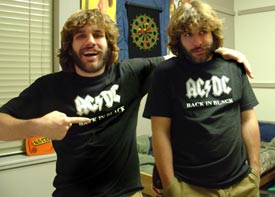 That bitch, he just HAD to buy the exact same shirt.

So you're heading out in the big blue yonder on your trusty vessel looking for a first mate. When along comes 40 foot waves and the occasional barnacle. You didn't think it was going to be all smooth sailing and open waters did you? Suddenly your Friend ship (get it) lands ashore on Normandy Beach and you're faced with hordes of enemies.

This is the real world people. There are 6 billion yokels on this planet, meaning there are 5,999,999,998 awkward first introductions to sift through before you find Like at first sight. About half of those are women (dating to be covered in a later Hard Way), and 1/8th are unbearably unattractive. The rest are way outta your league. So things aren't looking to good in your foxhole. It's either time to dust off and zip up the old “Cooler than I really am” suit or prepare for long nights on the Internet. So what's your persona gonna be? The guy with a nice car who uses women to fill the gaping void of insecurity? Or how about the overly competitive sports guy making a contest out of everything from eating to punching shit the hardest. Maybe you could inflate your own esteem by making fun of the previous two groups on your lame Internet column…. Hey Shut up, I don't have to take this from you.

Don't listen to my bouts of self-deprecation people. I'm the shit.

They say that a true friend is always there for you. But where was that bastard when you got in a fight… with HIM! He was supposed to back you up, but NO, he took HIS side. So you're torn between wanting to get back to the way you were, and knowing in your heart that he deserves a good swift kick to the dick.

Guys will usually wrestle around, throw a few jabs at each other and work the stress out so that everything's back to normal. Girls, as part of their programming, will engage in 72-hour mental warfare (usually over me) in which each will pretend to not be mad that the other is not noticing that she is pretending to not be mad. Reread it if you must. It makes sense I promise. At which point the first to get mad loses, is named the “Bitch” and must be the one to dish out the ice cream in the make-up ritual. They will ironically trade dirty gossip about the other members of their circle, causing the cycle to repeat itself. They'll gulp down spoonfuls of Rocky Road not at all realizing the inherent symbolism.

So which argument style is better? Healthier? Most damaging? I can't say. I do know, however, that if more women settled their differences physically… in skimpy outfits… and let us watch, there would be less arguments the world over. Because if there's one thing Guys lo— Hey Hard Way Queer, Shut your mouth and watch the titties!

I can't argue with that.

Girls that are friends, that is. HAHAHA you didn't think I had any expertise on the subject of actual girlfriends did you? Oh, my… that's too much. In case you were not aware, there are girls out there who tend to be “one of the guys.” What they don't realize however is that they are also “one of the reasons the guys are miserable.” I know that's harsh, and if your group is pulling it off, congrats, because you dodged some serious land mines somehow… maybe because your dainty girl steps aren't heavy enough to set them off.

“One of the guys” girls are a threat to the pack. If you're in anyway attractive, it becomes a competition over you. Just know that no matter how polite they are to you, once you leave the room, they let loose with rampant “wanna tap that” jokes. For example: “Man, I wanna tap that SO BAD!” Not very funny I know…but that's because comedy requires an element of truth, and you don't have an erection at the moment, missy. But don't feel bad, it could be worse… You could be a “one of the girls” guys… in which case the guys are repulsed by your inability to “grow a pair” and the girls would secretly shudder every time your camisole rode up and revealed a little belly hair.

Speaking of which, Michelle thanks all of you for the nice compliments.

Related
The Parking Garage Is Compromised, So How About We Trade Federal Secrets at La Romantica?
Nathan Cowley
Common Complaints About Our Clones
David Guzman
So I Caught You Trying to Sneak an Ice Sculpture Through Security. Again.
Aarushi Gupta
Resources