You’re jogging on the beach. Bikinized women call out your name longingly. The sand goes mush mush mush in your toes, it kicks up with each step, then flies around to give you compliments and kisses on your face. The ocean beside you waves…with a big watery hand, spraying you with fresh mist, but not too much to make you gag on saltiness. You trip and fall and prepare for the worst.

Sand does not break your fall however, but rather, you discover that you are on a big mound of breast. It says nice things and undulates under you. The giant woman it belongs to giggles as you tickle her rosey areolas. You wish to jump on her Y-cups like a trampoline, but your sneakery shoes of mischievosity accidentally grip and twist her nipple and cause her to yelp. The teat grows teeth and snaps at you. The once beautiful world around you has turned hostile.

Thank goodness you are now with your friends, watching a movie. Hey look, there’s that girl you only kind of know. What is she doing here? That’s really peculiar. And what’s with the dancing “something I can totally pin from my real life” going around the room. Oh man, somebody get me out of here. It’s too weird. OMG I’m naked! How long has THAT been going on?! Everyone can see your package! *POOF* Oh thank God, it was only your imagination…

No really. Nobody can see your package.

Don’t listen to him, you’re fine the way you are, little guy. Who’s my BIG BOY? Who’s my big boy toy? You! Yes you!

I Have a Dream 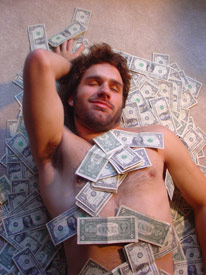 Lying in a pile of money completely naked? I must be dreaming…or pandering to my audience.

Where my four little children run around singing The Killers lyrics. And then I remember that I don’t even have children. Why is each a different color of the rainbow spectrum? Then they call for their surfboards and escape on the incandescent beam of light shooting out of the refrigerator. Inside you find the source of the light to be a bottle of grape juice. The light beam ignites your clothes aflame, and your only choice is to empty the purpley contents and douse out the blaze. After waking up you find your pants soaked with one of two liquids, neither of them made by Welch’s.

Your head is a mess, despite knowing the events were all imaginary. Try as you may to decipher them, they offer nothing except a lingering depression somehow related to your dog’s death two years ago. And for some reason you have a vague sense of guilt from your perplexing yet enjoyable arousal. Every now and then you’ll run into a dream like this, and never has something without substance had such a substantial effect on your real life. Your entire day becomes a walking puzzle in which your brain is ashamed at its own incoherence. Are you gay now? Do you secretly resent your father? Do you care more about your ex than you let yourself admit? You consider dismissing these dreams as random neuron firings, swallowing whatever emotions they invoke. Just force them down beneath the surface of your unconscious. Everything will be alright…

Yeah, in your dreams.

Disaster in Your Wake

Sometimes it’s not the dream that’s frightening, but the escape from it. Everything’s going great, you’re drinking liquid gold while some lady is writhing naked all over you, trying to make every body part she has get in contact with you like you’re the hot shower water in a cold bathroom. You sweat, but instead of water, pure male swagger comes out, meaning you literally ooze confidence. All of a sudden this little fantasy begins to fuzz up around the edges; voices echo in the distance. Sunglow filters through your closed eyelids, and without even having to open them, you curse the fact that you’re awake. Try to slip back in, I dare ya. It’s impossible. You’ll end up in some intermediary world of loneliness. If you try to recreate the scene when all the actors have gone on break, you’ll end up naked on the soundstage giving yourself a puppet show.

Waking can be the most violent part of your dream too. Like when you’re in a brawl in your dream, and you go for the uppercut in real life, slicing through nothingness and feeling like a complete tool…scissors to be exact. That half second when your mind is awake, but your eyes are still closed is the most frightening, disorienting moment in your life. You don’t know what’s real and what isn’t, but your arms and legs still swing in an attempt to explode out of your personal space. There are three people I never want to have to stir awake from their dreams: break dancers, Wolverine from the X-Men movie, and explosive charges. The last group really tends to blow up in your face if you tick them off.

And they’re always telling everyone they’re the bomb.

There is something to be said for escapism within dreams and the undeniable presence of sexuality in the human psyche. Nobody ever dreams about cleaning merely because it’s been weeks since they’ve touched a vacuum. On the other hand, almost everyone has had some weird sexual dream that ironically involved that vacuum cleaner. Not like that though you sicko. They used the vacuum to suck off all the girls’ clothes, and chase them around. The girls, however, kept ripping holes in space-time to escape. And then there were gorillas, peeling huge bananas to reveal nubile fruit women which they devour. Yeah you’ll stop there. You don’t want to talk about it.

Unfortunately, only a select few get to have sex dreams where everything goes right. I refer of course to the people out there who are already in abundance of sex, and merely have to recall events that happened right before they collapsed from exhaustion. For the rest of us, our imaginations are like little kids, mixing and matching things that really don’t go together. This is when things get fucked up. Why is your third grade teacher watching as you hump a VW beetle? Why are you chasing a girl in a marathon completely nude except for glass slippers? Why does your member breathe fire, only to turn your room into a raging inferno while moaning noises pour out of the faucets instead of water? It is frustrating not being able to find the meaning behind these dreams. I guess you’ll just have to take solace in the fact that nobody really knows.

Unless you’re talking about your morning wood, everyone can totally see that.

Mikey: But here’s the part where it gets really weird. There were rabbits hopping everywhere.
Girl 1: Whoa that is really weird.
Girl 2: Yeah I wonder what that means?
Girl 3: I think it means we should get naked.
Steamroller: I hope you like FLAT girls!

Mikey: So yeah, is that not the weirdest dream ever?
Girl: You’re putting me to sleep.