From the twenty-third of September to the twenty-second of October are born perhaps the world’s greatest populace. I of course refer to the great and mighty followers of the constellation known as Libra, the mighty scales. I read my horoscope for today. It just said “Sorry in advance.”

Born on the sixteenth of October, I’ve lived under this cursed zodiac sign for far too long. Scales? Scales for crying out loud. How am I supposed to impress ladies with this thing? Even Virgos get more action than me. All in all, though, I consider the scales quite appropriate, in a self-fulfilling way. Libras constantly weigh their options, thinking it out, looking for the best outcome… such as when we watch the leaves turn colors, deciding whether to drink the cyanide or pull the trigger of the gun stuck to our temple.

Attributing one’s destiny to their date of birth is rather ridiculous if you ask me. Of all the factors that shape your life: nature vs. nurture, evolution, creation, God, which lunch table you sit at, attractiveness, and whether you’re dad’s favorite, it seems highly unlikely that a crudely imagined figure created from a few stars has any bearing. Even then your astrological sign is less about fate than it is when your parents boned. Ponder that one for a while, you know I have. I’m a Fucking Libra.

A libra, if you didn’t know, is a Roman unit of weight. This produces the question of why the symbol couldn’t be something cool like a weight bench, or a big burly stone which rolls and crushes things. In all honesty, it doesn’t matter that much. Nobody really believes all the zodiac business anyway. I’m still able to haul in tons of women. 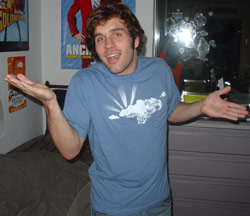 Weighing my options over what pose I should make in the picture.

Leo the Lion, Aries the Ram, Sagittarius the Archer? If there was a war among the stars, a whole lot of ass kicking would take place. Now I don’t know who would win…. Actually that’s not true, if there was a big star war, Luke would totally own all. But you don’t have to connect the dots to figure that Libra would be the one person sitting on the sidelines keeping score. Aquarius would drown some people, Pisces would give people some food poisoning, and at least Virgo could use sex as a weapon. The all mighty Scales has no other recourse but to sit and wait, maybe seesaw back and forth a little.

Perhaps a crummy zodiac wouldn’t be so upsetting if the damn symbols weren’t so arbitrary. Sure those five stars could be scales, but if you let me draw them in I’m pretty sure I could craft it into a warplane… covered in muscles… and adoring vixens. But no, whoever was in charge, gave me the scales. This is probably the same guy who says the cloud looks like an angellerina when it’s totally a dragonasaur. All I’m trying to say is that Libra got the shaft. If you’re going to name constellations, your creative skills better be out of this world. What was he thinking?

Apparently he wasn’t a Libra.

That’s what people won’t be doing if you’re born a Libra. In fact they will completely forget about you and your birthday. It’s a tragic fate. Spring and Summer babies get all kinds of attention, throwing pool parties and ice rink things. Libras get a half-assed effort at some Halloween themed affair. So there you are with a birthday so obscure, that even you sometimes forget it. None of your 6-year-old girl friends are in bikinis, and you just received a book of scary stories as a gift instead of Super Soakers. At that age you didn’t mind too much, but as your love for girls in swimsuits grows over the years, you become increasingly bitter over your wintry, gothic fall birthday. You try to reverse the trend and get excited about your birthday, but nobody really falls for it. Your efforts fail, and you’re left with nothing but a chilly evening when the only thing longer than the shadows are the tears streaming down your cheek. It is in this dark hour that you wish you could blast your brains all over the wall.

Or at least a bowl of wet noodles.

That Time of the Month

So now I’ve succeeded in making you bitter about being a Libra; that’s great for me, but doesn’t do too much for you. You can live with a death wish for the next few weeks, or you can follow my lead and starttearing down the other zodiac months until the significance is totally reversed. Start spreading rumors about Scared Scorpios and Capricious Capricorn. If anyone questions your faulty use of the word capricious, say they must be born in July, because only a Condescending Cancer would be so crabby.

While everyone is scrambling to control the damage of the swirling rumors defiling their oh so precious star status, us Libras have a lot of options for our new image. Do we want to be the Lady Lovin’ Libras, constantly reminding everyone of just how much comet tail we’re getting? Or the Languid Lounging Libras, easy going and smooth, able to keep our cool while hurtling through space at a million light-years a minute? Perhaps we’ll be Lucky Libras, winning at slots, living on the edge, always playing the odds and coming out on top… of that hot blonde, getting lucky. We could be anything we want.

Mikey: Oh man, check out the Gemini on that girl.
Guy: Forget it dude, you have no chance.
Mikey: Aww, c’mon I want to Aries her so bad.
Guy: This, coming from a Virgo?
Mikey: You know what? I don’t have to take this Taurus.
Guy: Just consider yourself lucky. It burns every time I take an Aquarius.

Don’t anthropomorphize your pets. They hate that.