Men vs. Women: Which is the More Emotional Gender?

There's been a lot of talk about men and women on PIC lately and the correct ways for the genders to act in this situation or that. A lot of accusations and gender hate was thrown back and forth, all in the name of "men are like this" and "women are like that." So I thought, what better time than now to stir the hornets' nest with an article about a pretty major gender stereotype?

Last time I checked, anger was an emotion, yet for some reason when a man expresses anger he isn't labeled as overly emotional. Okay, who am I kidding, half the site is littered with articles about major gender stereotypes and the correct way for a man or a woman to act. This isn't a new topic to PIC, but then, what is one more article dropped in the endless bucket, right? What I want to talk about today with you, dear reader, is the concept of being "overly emotional" and exactly who is the more "overly emotional" gender. It is pretty widely accepted in society that women are WAY MORE emotional than men, but since I like to twist things up and present them from an alternative perspective, let's all take a closer look at that claim, shall we?

Look, I understand everything men have to deal with in society in order to get ahead in life: the pride, the one-up-manship, the delicate egos, the bravado, the throwing of poo around like a chimp. I get it, I really do, but we also don't have to be a slave to society's rigid expectations any more than women have to. (Wait, ladies, you do know you don't have to, right? Nevermind.) Whether or not to conform to societal stereotypes is a personal choice each and every one of us makes and either you're cool with your decision to do so or you aren't. The gray area comes when the people who are seemingly cool with who they've chosen to be, aren't cool that other people aren't like them too. We're ALL guilty of it to some degree in order to justify our own way of being, but the truth of the matter is, it's all bullshit anyway and there is no right or wrong way of being. 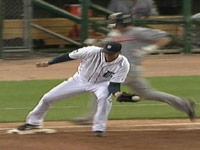 SAFE…to say I will be in tears about this tomorrow!A lot of stereotypical guys like to demonize women for being too emotional, but obviously men have emotions too, and certainly express them frequently as well. Just take a look at how many men cried and whined about that botched baseball call by Jim Joyce. Many cried that it was the worst call of his career, but then again, I had no idea who the hell he was until that bad call, so like this article, I guess it's all a matter of perspective. Besides, it isn't like men having emotions is a big secret. And I would venture even farther to say without a doubt that men are in fact the ones who are more overly emotional and more hormonal than women.

Last time I checked, anger was an emotion, yet for some reason when a man expresses anger he isn't labeled as overly emotional. On the other hand, if a woman cries at work then she is instantly and forever labeled as "overly emotional." I remember this one woman who cried at work after she found out that she had terminal cancer and the men were laughing about it for weeks…until she died; then it was just awkward to laugh about her crying at work. Getting angry is just as emotional as getting sad as far as the definition of the word "emotion" goes. Personally, I have seen WAY MORE men get angry at work, while driving, or when doing just about anything, than I have ever seen women crying during all these same activities, and I am usually around more women than men, so that's actually saying something.

There is no screen saver for the emotionally unbalanced.It is also medically accepted that one of the major driving forces of all this anger is the hormone testosterone. So correct me if I am wrong here, but doesn't that not only make men more often emotional than women, but also more often hormonal too? Sure, women can get really angry (believe me I know), but the expression of it is not nearly as extreme or erratic as a man's expression of that same degree of anger. When was the last time you saw a woman punch a wall or even another human being because she got upset about something mundane, like that time I put cayenne pepper on Fugly's vibrator? You should have seen it, I thought she would freak out and scream/commit bloody murder, but instead she just bit her lip and took it like a pro!

Speaking of murder, what about murder and violent crime statistics which are based on collected factual statistics? Throughout history the world's prisons have always been vastly more populated by men than by women, so doesn't that mean without a doubt that men are more emotionally erratic with their behavior and actions than women are?

On top of all this anger that men express freely and frequently are all the other emotions that men have, whether they care to admit it or not. You don't have to look any farther than your iPod to find men in highly emotional states. Take jazz music for instance, a style which seems to be predominately played by men. Jazz is some REALLY emotional music to say the least, and if men aren't an overly emotional bunch, then why is that genre so fraught with emotion? Society looks at jazz as a cool and soulfully acceptable form of emotional expression, but make no mistake, it's expressing plenty of emotion.

Another popular musical genre is country, which, personally, I can't fucking stand. When I listen to country music, all I hear is a lot of fingernails on the chalkboard, emotional whining, and moaning about love lost, money lost, family lost, dog lost, truck lost, chicken lost… Jesus, it seems those country boys lose just about everything and then write a "tear in your beer" song about it. Nonetheless, country music is considered a cool, manly, good ol' boy, form of emotional expression, because every artist wears giant, overcompensating, ten gallon hats, buckles and boots. But make no mistake, it is still expressing buckets of emotion.

Thug Life? More like overly emotional and hormonal Thug Death!I won't even bother talking about all the emotion tied up in rap and R&B music, but no one would argue that the amount of both anger and sadness bundled within the two genres is enough to drive people to murder and suicide. Just ask Tupac and Biggie Smalls. Oh wait, you can't, because someone killed them.

I touched on it briefly already, but sports is actually one of the best places to see men's extreme emotional and hormonal responses. Whether you're playing or watching your favorite sport, there's no better way to see men acting crazy and erratic than in support of "their" team. Whether they're spelling words out with body paint, screaming at the top of their lungs, or just throwing beer cans at the television set, it's hard to dispute that men are HIGHLY over emotional when it comes to sports. 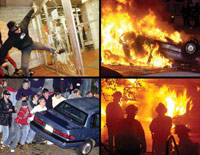 Riiiiiiight, not overly emotional at all.While it's true that a great deal of women participate in this behavior too, it is hard to argue that the vast majority of the crazy, erratic, obsessive, testosterone-driven behavior, over a win or loss by a sports team, is perpetuated by the women. Men have actually killed each other over team rivals. Each year the whole world loses it's damn mind over something involving a cup the size of the world. There have literally been riots in the streets because someone won or lost a college game. The amount of emotional energy expressed throughout the entire year over various sports in general trumps anything I have ever seen a woman express. Jesus, if men agreed to only watch one sporting event a month, I think women across the globe would agree to never mention their periods ever again! Men are some overly obsessive crazy people when it comes to sports, but again, because it is a male-driven society, it doesn't really count as being overly emotional, right? Try and tell that to Armando Galarraga, who's probably still crying at this very moment. 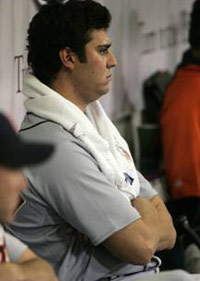 Repeat after me, "THERE'S NO CRYING IN BASEBALL!"So exactly who really is the "overly emotional" and "hormonal" gender of the two? I would easily argue that men own the title 100%! Sorry boys, I'm just calling it like I see it, whether you like the call or not. Of course, if you don't like the call, you can always freak the fuck out, throw things violently, or yell and scream about it until you're blue in the face. Or you can just pull it together and get a fucking grip on your emotions. Honestly, the reason I enjoy the company of women so much more than men is because you guys are just WAY TOO emotionally erratic and hormonal for me to deal with.

More Like This
I Beseech Thee, Land-Lord, for Thy Forbearance with Rently Payments
Alex Connolly
15 Subdued Alternatives to Harsh Overhead Lighting
McKayley Gourley
Excuse Me, Do You Have a Permit for This Outdoor Proposal?
Julien Perez
Resources

When you go to the office, you shouldn’t have to leave your morals at the door. Your employer should provide a secure storage space in your cubicle.