We hear about this all the time. It's splashed across the pages of Cosmo and Maxim, in episodes of Sex and the City and Entourage, even a book turned movie, appropriately titled, He's Just Not That Into You. Which is why it's interesting to me that I still constantly witness women sitting in the palm of men's hands (and vice versa) who clearly aren't crazy about them (in other words "just aren't that into them"). 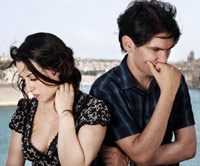 "One potato, two potato, three potato, four. Five potato, six potato, seven potato, WHORE!"While the movie/book, which I will now refer to as "the Mook," does a decent job of outlining some of the bigger things to look out for (if he's not calling you…/if he's not marrying you…) I think that it's also important to be aware of subtleties so that you don't find yourself five years down the road wondering where the ring is. That and it's no fun to spend your time feeling underappreciated slash wondering whether or not you're even in a relationship.

I hate to start this article out by bringing up something as superficial as Facebook, but the sad truth is that Facebook is pretty freaking official these days. Can you remember the last time you met someone and they told you they weren't on Facebook? If so, do you remember your reaction? Mine is generally utter disbelief, and now that Facebook has exponentially reached out and gotten not only my parents but my grandparents, little cousins, and boss in its grasp, I understand that Mark Zuckerberg isn't fucking around. He came to play.

Yes, there are people who aren't "texters," but if my dad can text me back then so can my boyfriend.When it comes to Facebook relationships, it can be easy to get lost in the gray area, where girls are "married" to their best friends, and other people don't put anything up, requiring you to take part in the oh-so-elusive "are they in a relationship or not" game by scanning through their pictures and wall posts to figure out if they're taken.

Then, there is the question of what is acceptable and what is annoying. Personally, I used to think it was lame when people put the name of the person they were dating with their "in a relationship" status—that is until I, myself, was in a relationship and proceeded to put his name on my profile—because I wanted it there. Which brings me to my first point: it's important that you don't feel like the person you are with is ashamed of you. I know you're probably thinking, duh, but it happens more often then not. I'm not saying that your boyfriend or girlfriend should be all Tom Cruise on Oprah's couch crazy, but better that than being with someone who is introducing you as their "friend" six months into a relationship, or has "single" as their Facebook relationship status after a year of dating and meeting the parents. Everyone is different and some people don't want everyone to know their business, but that said, it feels good when your significant other makes it clear that they are off the market—and it feels even better when they make it clear that they are off the market with you. Plus, it cuts out a lot of the bullshit associated with trust issues, etc.

Now that that's covered, I need to air out some dirty laundry real quick. There are some people who I feel "overshare" on Facebook, and I find that I bitch about it constantly (case in point). I have one girl in mind (the reason I bring this up) who I am friends with because we shared the same small major at the same small college. But our friendship never extended beyond a little classroom banter and Facebook. She recently got engaged; her fiancé has been away for a couple of months doing a training program in Georgia; and the last time they spoke was last night at 9:48 PM after she met with her book club and went for a run. I know all this because of Facebook, and truthfully, I wish I didn't. I want to shout at the computer "TMFI!!" The fact that I could, without hesitation or effort, tell you the last five times this girl and her fiancé spoke, and whether it was by email, Skype, telephone, or text, is a sad, sad, thing.

But…I'm addicted. I'm addicted to updates about her relationship like I'm addicted to clips of The Real Housewives of New Jersey on Hulu before bed. I hate it, yet I'm drawn to it like a moth to the light. What it really comes down to is that I don't think it should be there. If you need to write about your relationship 24/7 get a diary, or a therapist, or…a column.

People need their alone time and personal time with their friends and families, but if they aren't inviting you to the basic stuff, it's not a good sign.Great, now we can move on to a pretty general sense of what goes on in a relationship communication-wise. There are some big red flags that many people ignore, which they really should be paying closer attention to. The Mook starts to get into this when it covers the whole "if he's just not calling you…" piece which I think can now be extended to "if he's not calling you, texting you, emailing you, or flat-out hanging out with you." If you find that the communication in your relationship is pretty much one-sided, or you frequently imagine yourself sitting on a seesaw alone, waiting for your partner to start the balancing act, you may want to rethink what you're doing in this relationship. Yes, there are people who aren't "texters," but if my dad can text me back then so can my boyfriend. And if it's just not his thing, he'll find another way to show you that he cares—bearing in mind that if he's going to do that, he actually has to care.

Which brings me to the importance of your boyfriend/girlfriend asking and inviting you to do things. I'm not talking about every little thing—people need their alone time and personal time with their friends and families—but if they aren't inviting you to the basic stuff, it's not a good sign. Prime example, my ex-boyfriend was going to a big Halloween party at a friend's house last year with a bunch of his friends that I had hung out with a fair amount of times. He knew that I didn't have any serious plans, yet he didn't invite me to the party and he made it quite clear that he was going solo. We wound up meeting up later that night, and I acted like everything was fine. The following morning I went to his football game where his friends proceeded to inundate me with questions about why I wasn't at the party and how I thought I was "too cool." Needless to say, that was the end of that relationship.

Lastly, I'd like to talk about trusting your gut. As a woman I analyze the shit out of relationships—my own, my friends', and my family members'. I think a lot about the way people treat each other, how happy I think they are, and I read about this kind of thing pretty often. I read about how the way you sleep together at night, the way you kiss, and the tone in which you talk to each other can be quite telling of the health of your relationship. I find some of this to be true, but I think your gut instinct about something is equally as important.

Take, for example, the cheating spouse scenario. You think your husband or wife is cheating on you. You don't have proof but you just feel like they are. Whether or not there actually has been an indiscretion, there is something to be said about how you are feeling. Clearly, something is wrong in the relationship. Trusting that feeling could potentially save you a lot of time and energy. It's not always the easiest thing to do, but when it comes to dealing with relationships, "easy" is hardly in the vocabulary.