If you take a look back through the ages, every decade has had their own style: the 70's had bell-bottoms and acid, the 80's had leg warmers and Prince, and the 90's had baggy jeans and white kids acting like black men. My fear is that when future civilizations look back to the 10's, or as I like to call them, The One Oh's, they will ridicule the stupid facial hair, bright neon colors, and wang-hugging jeans associated with hipsters.

Hipsters are without a doubt the bane of my existence. They have taken all the little things that make a person interesting and unique, and cluster-fucked them into a giant, ironic package. Normally these things can be handled in moderation, but once a hipster starts using/doing them, it causes you to lose all faith in humanity.

"Lonely, I'm Mr. Lonely, I have nobody, for my owwnnn…"I remember a few years ago, when the whole vegan fad started, people were actually turning down eggs and getting grass in a bowl instead. They weren't even eating fish, and fish aren't even real animals! Since then, being a vegan has turned into something that women who do yoga take part in and everybody else just avoids like the plague.

But, thanks to hipsters, being a vegan is now synonymous with being a pussy, and the same goes for eating organically grown food. A lot of people will probably get upset by this. They'll say, "Hey Yaro, that's not funny, I've been eating only organic vegetables my whole life so I can't be grouped into the same category," to which I say, "That sucks, you should go down to your local ‘coffee pub' and thank a hipster for turning your lifestyle choice into a running joke." 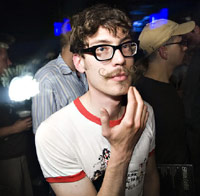 "Oh, this? Just a little thing my girlfriend whipped up."Before hipsters, I could walk down the street and see a guy with a handlebar moustache and give him a mental high-five for having the stones to pull it off. But now, having some sort of ironic facial hair is like a badge that these hipsters need before they can enter their special club (said club may or may not be a warehouse rave), and that discourages normal men from growing such classics as "the mutton chops" or "the Dali."

Growing facial hair is a rite of passage for all men, and there are only a slim few years when a man can grow whatever his face desires before heading out into the corporate world. These are known as "the college years." This raises a huge problem if your specific school has a large hipster population because you run the risk of being mistaken for one of them if you do something creative with your "face-canvas." 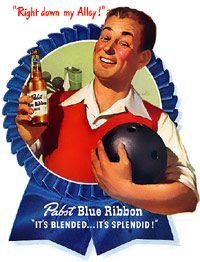 Drink yourself right back to blue collar 1954. I have no idea why someone would willingly drink Pabst Blue Ribbon. In fact, nobody used to drink PBR before the early 2000's, unless it was as a joke, because why else would you want to consume the same liquid that people in southern Alabama drink daily? But now, thanks to hipsters, everybody drinks PBR for the simple reason that nobody else drinks it and that somehow makes them better than the majority of people. This makes about as much sense as people sending a fax because everybody else is sending emails. Think about that. 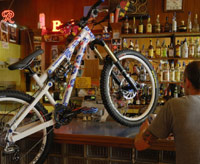 "I'll have two PBR's please, one for my douchebag friend here and one to lube up my chain!"Back in the day you rode a bicycle for one of two reasons: either you wanted to cross some bumpy terrain, or you couldn't afford a car. Thanks to hipsters, riding a bike has become a way of showing that you don't bow to "the man"; that you blaze your own trail without relying on "public" transportation. It also means that you can ride through the city with your tweed blazer and knit scarf blowing in the wind.

More Like This
10 Hilarious and Amusing Android and iOS Games
Travis Lee
Banning Me from Game Night Is Nothing Short of an Orwellian Nightmare
Ryan Ciecwisz
Well, Gang, We Completely Failed to Save the Rec Center
Lucas Gardner
Resources

You say I wasn’t an overachieving Asian kid but when my dad said to go get a stick for my beating I brought back the biggest hunk of bamboo I could find. And this was in Western Canada.