I'm usually a very healthy person. I don't get sick often, and I haven't been sick in about four or five years. So I kind of let my health insurance expire on the first of this year. Not a big deal. Then I remembered that I manage to smash myself on hard objects about once every 365 days on average.

Well, I'm hoping not to crush another vertebrate or get my appendix removed, but for fart's sake, I've come down with some sort of illness. Was it too much partying on My Birthday/New Year's Eve? I don't know. You'll have to ask one of my many friends and fans that were there. I don't remember. Have I just been burning the candle at both ends? Maybe. Was it making out with loose women? I don't know, ask my friends. I don't think I made out with any more than one girl on January 1, 2009's midnight madness. Could shaving my head on the coldest night of the year have any effect? Who cares?

Bundle up. Take a shot of mezcal. You'll sweat all that sickness out.

The thing is, I want to be able to talk, breathe, and not cough my guts out. So I've been trying over-the-counter cures. Nothing is working so far.

This is something I don't mind doing anyway. Plus, I'm not eating, partying or playing that ultra-expensive miniature golf. So I guess it's free.

This is usually my standard cure. The 30-pack of lozenges does the job pretty well. If you're smoking a Newport and accidentally mistake the cigarette for a piece of gum and start chewing it, that's kind of what these things taste like.

This feels good. Gets me extra clean. The steam loosens up my lungs, so I've been hawking green loogies all over my bathroom tiles. Plus, I don't have to pay for hot water in my building. So this is a free treatment. However, I do get interrupted by roommates needing to crap, brush their teeth, or wash their balls. (Just kidding, my roommates never wash their balls.)

This and the long shower are my mom's suggestions. While having a cup of green tea every fifteen minutes makes me feel distinctly Chinese or British or whatever, I'm not feeling any healing effects. And tea, you know, tastes like tea. Except when it's peppermint, Earl Grey, or ball-flavored. 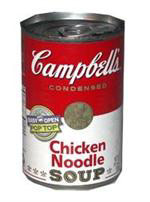 I used to think this was like instant-penicillin, but even with hamstrung tastebuds, this stuff still kind of tastes crappy. The salty poultry goodness makes my tumtum warm but that's about it. Chicken and noodles must have been hit hard by the economy, because $2 a can seems pretty steep.

"Take some whiskey. Take some honey. You're cured!" Well, this is usually a great idea, but I'm kind of the reason there isn't a drop of Jameson left at my bar. So I can't physically drink another shot of Irish for a while.

"Bundle up. Take a shot of mezcal. You'll sweat all that sickness out." If this Hot Mexican Chick wanted to join me while both of us were naked, yes, I'd do it. But I don't think I can stomach something that tastes worse than tequila. Unless I'm with a nude Latina chick. If this South-of-the-Border hottie asked me to chug a gallon of Tijuana water, eat a pound of frijoles negroes, and wear my nicest underpants, I'd do it. Just no mezcal.

A warm shot of gin?? Why the fuck are you assholes trying to get me to drink? Can't you see I'm fucking sick!?!?

I guess if I can smell how bad this stuff smells, it must be somewhat working to unclog my nostrils. But the only difference I see is that nursing homes and I have the same scent. This stuff sucks. Maybe it only works for black people. I'll have to ask X.

A "Kind Of" Doctor Visit

I pull my curtains, lock my door and fire up my Internet. I find a movie called "Big Tits Doctor Visits." From what I gather, this guy goes to a new physician which just so happens to be a big-boobied blond chick. The medical professional has him strip, then notices his huge cock. Instead of doing a physical, she "takes his temperature" orally, vaginally and anally. While the American Journal of Medicine might not have any proof, this fine film definitely made me feel a lot better after a few viewings. I even had to rewind and pause a few parts. And save it onto my computer for future use. In fact, I might just watch it right now…