10 Classic Things Every Awesome/Terrible Movie Should Have

A movie lover's guide to the world's greatest drinking game.

Two of my favorite things are drinking and watching shitty movies. Whenever possible, I like to combine these things, forming my own twisted movie drinking games with elaborate and ever-changing rules. While it would take too long to explain everything in detail, I can provide you with some of the basics. Next time you're watching a bad movie, feel free to play along and drink for scenes featuring the following things.

Did you know that back in the 70's and 80's, cars ran on hydrogen and C-4? Life was dangerous, full of cliff top car chases and deadly fruit stand road blocks. Just the slightest impact could make a car burst into flames. Sometimes they would explode at even the threat of collision, before they hit the ground.

So as far as I'm concerned, if you're willing to put cars in your movie, you'd better be willing to destroy a few of them, too. Detroit will make more. They need the work. 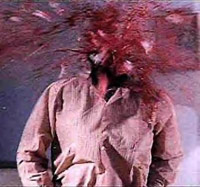 Have you ever looked at someone and imagined their head exploding? Of course you have. And thanks to movie magic, we are provided with accurate visual representations of just how amazing it would look.

It doesn't matter why the head in the film is being exploded. Head explosions are the highest form of Zen violence—they need no explanation. Maybe it was from a shotgun blast or an alien death ray. Maybe the skull was punched so hard that it burst into bloody fragments. Maybe it was demonic sorcery. Who knows? Just enjoy it.

Everybody loves tits. Tits in the mud, tits in the shower, tits in the bedroom, tits in the kitchen… there's never a bad time or place for gratuitous nudity in any film. Anything you can do with a shirt on can be done just as easily topless.

Some of you might be saying, "But that's exploitation." But may I remind you that actors are not really people. They are the slaves of our cinematic fantasies, and they will dance for our pleasure as we throw money at them. They knew the risks when they hopped on the bus to Hollywood. 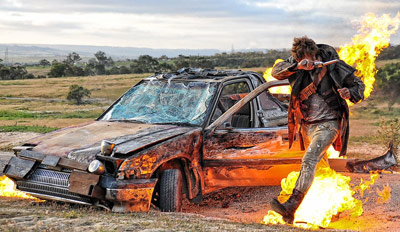 Kids today don't know how to have fun. Back in my day we didn't have iPhones and X-Boxes, we had fucking pyromania. But setting an actual living person on fire was always a big no-no and a one-way ticket to time out, usually accompanied by a belt-knuckled ass-whooping. Once again, movie magic comes to the rescue.

There are people who make a living by letting someone smear them with flammable goo and set them on fire. They clock in, dress up like a baked potato, get greased up, take a torch to the back and run around in circles for about fifteen seconds while somebody films them and plays it back in slow motion for the amusement of thousands of people who have never ever been on fire. So what do you do for a living, tough guy?

Not the same: being digitally on fire. 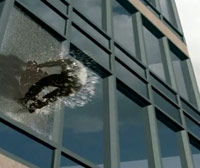 Defenestration, in case you were wondering, is the technical term for being thrown out of a window. In action movies, this happens on a daily basis. Action heroes are 2000% more likely to be thrown through a window than catch a cold. If you're a business owner in a high crime district, window insurance is the most important investment you will ever make.

When applied to drinking games: be sure to shout "defenestration!" before taking a drink or shot…it's a fun word, and you should use it more often. Also note that combo effects stack up to multiple drinks or shots. For example: flaming dog defenestration would be 3 drinks, and naked midget clown hooker on a motorcycle defenestration would be 6 drinks, or one plus the number of descriptive modifiers you can accurately add in front of the word defenestration. Or just take one drink for the whole thing if that's too confusing for you, which it probably is.

Every good horror film needs suspense, and there are a few different ways of achieving this. One method involves having people walk up and down dimly lit staircases as slowly as humanly possible. Another approach is to make the victims totally inept so that they fall down at every available opportunity, giving the killer the luxury of never having to break his leisurely stride in order to catch them. Yet another method is the classic boyfriend fake-out, where the douchey teenage boyfriend of the slutty older sister jumps out of nowhere to scare her, then laughs and says something romantically misogynistic while cracking open a beer.

But for my money, you can't beat a good cat attack. The concept is simple: someone is creeping around the kitchen or the basement or wherever because they heard a noise and the lights went out and it's super scary…and then all of a sudden OH SHIT THE DIRECTOR JUST THREW A FUCKING CAT AT ME! Whew, close call. Good thing it wasn't OH FUCK NOW THERE'S A GUY STABBING ME!

Do I even need to explain this one? 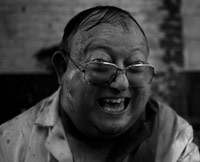 Oh sure, they might spout out some back story, or provide ominous yet helpful warnings to those crazy kids that "shouldn't be messin' round these parts," but mostly they're on the set for one reason: they look weird and they frighten beautiful people.

Bonus points if the creepy stranger is also some sort of warlock or shape-shifting monster. 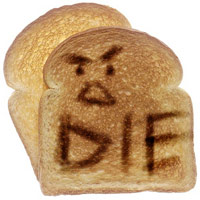 This is also known as the Schwarzenegger rule. You know how it works. Kill a guy while making a clever play on words involving the circumstances surrounding their imminent demise. It's what separates the amateurs from the pros. Anyone can beat a man to death with a toaster, but it takes a razor sharp wit and nerves of steel to think of the perfect pun to go with it, and to deliver that perfect on-the-fly quip in perfect deadpan at just the right moment. 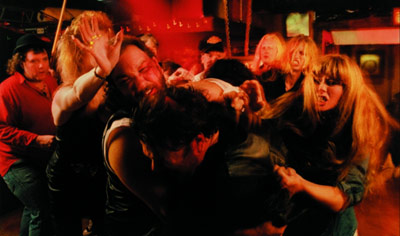 The bar fight scene is essentially the drinking game equivalent of an orgasm. As soon as the movie erupts into a raging bar fight, you have to drink through the entire scene, right down to the last broken chair. If you finish your beer, start on another one. It's the rules.

Bonus points if the bar is full of zombies, werewolves, monsters or vampires.

Related
A Dating Profile of a Gothic Novel’s Love Interest
Erika Lindquist
Are You My Future Boyfriend or a Personal Injury Lawyer?
Kendra Stanton Lee
So Who’s the Real Monster in All This?
David Guzman
It’s Very Postmodern
Jennifer Kim
Resources