A barbarian, a dwarf, and a wizard walk into a gay bar.

I'm starting to get the hang of this whole internet thing. They used to kick me out of the library just for being a dirty wino. But now that I'm a world famous… blog… whatever… they treat me with respect, and don't throw me out until I start masturbating to pictures of He-Man or the Thundercats. Those guys must have worked out a lot. I mean I'm not gay or anything, but sometimes I blow dudes for drugs or hang out in locker rooms with a Pez dispenser full of raping pills and this one time I flat out hate fucked a guy in the face because I didn't like his hat. What? Like I'm the only person that's ever done that.

I am known as Krullnob the Mighty, and I am the estranged warrior king of Gaythuselum, the land of glistening muscles. I was banished from my kingdom by the evil demon wizard Rawdog Skeletonface who shoved me through the magic portal so that he could claim my crown and possibly have unprotected buttsex with my lovely transgender sister, Divalexus, whom I suspect he quite fancies.

Looking for someone fun to pal around with for long walks on the beach and comical shopping mall montage moments as I struggle to understand the ways of your modern Earth dimension. Short term only, must return to homeland to crush evil wizard. 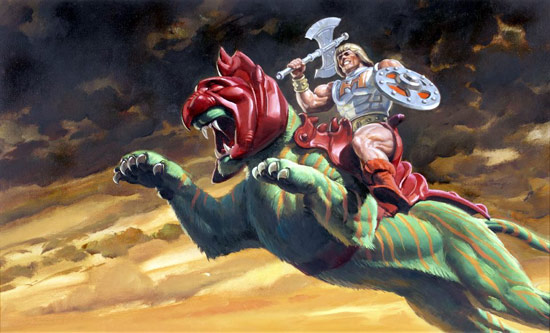 When I looked at the contact information, it said that he was writing from a public library. That's when I realized that there was a sweaty shirtless guy sitting next to me. He was eyeing me suspiciously and said, "Are you a wizard? I do not trust wizards."

I told him it was okay because I was a good wizard, and I had a dwarf with me. The barbarian smiled and pet my dwarf. The dwarf made no reaction as he continued to type everything that was being said and done for my psychiatrist's records. That dwarf never talks. Watch this: hey dwarf, your mother likes it when I piss on her during sex! Now he has to type that. He's a good secretary.

"Then you will be my guide."

Okay, so a wizard, a dwarf, and a barbarian walk into a gay bar. Stop me if you've heard this one.

"What is this place?" he asked as drag queens jerked each other off under strobe lights to dubsteb remixes of Boy George songs.

"This is the only place we can go where a guy like you can get us all shitfaced drunk for free. Did you oil yourself up before we got here or are you always that shiny? You know what, it doesn't even matter. Go find a twink to buy us drinks." I stopped a kid with a faux hawk and said, "Hey, this is my incredibly hot and shiny manservant. He insists that you bring us vodka shots. Grey Goose if they have it."

"Shut the fuck up, man-candy. I do all the talking."

Two minutes later we all had shots, even the dwarf. Knobjob was entertaining Faux Hawk with tales of his latent homosexuality in the faraway land of Gaythuselum, where the men were always working out and wrestling with each other, and the women were kept in breeding chambers.

"But there was an evil wizard named Rawdog Skeletonface…" I stopped listening so I'm not actually sure where he was going with that one. I'm sure the bastard has a million "broken man" stories about evil wizards.

I browbeat Faux Hawk into giving me twenty bucks so I could buy a drink because the bar was expensive as fuck because apparently gays are rich. I slapped the twenty on the bar and ordered a bottle of the most piratey rum they carried. The bartender gave me a chocolate martini and a hit of ecstasy instead. I was about to complain until I realized holy shit, this is delicious.

Right around the time the x started to kick in, maybe thirty or forty minutes later, this big portal ripped open in the DJ booth and some dude with a skull for a face came galloping in on a flaming horse with six legs and ram's horns.

"Krullnob! It is I, Rawdog Skeletonface, stealer of the crown and ruler of Gaythusela, come to taunt you! Your sister, Krullnob! She blows me every night! Bwahahahahaha!"

I looked over at the barbarian and said, "Hey Knobjob, I think that guy's talking to you."

What followed was the weirdest, hottest, gayest wrestling match that anyone had ever seen as Knobjob rushed the stage to grapple Rawdog in manly combat. The DJ started playing Right Said Fred and there was glitter everywhere. The drag queens were giving out free t-shirts and drinks were half price.

I blacked out at some point, and when I woke up in the gutter, Knobjob was gone. I wonder if he ever made it home. I hope so. Faux Hawk was in the alley with me. His pants were around his ankles, so I guess I probably raped him while I was on ecstasy. But he was dead, so I couldn't ask.

Oh yeah, and somebody stole my dwarf. Wait, no, false alarm. I found him in the trashcan covered in glitter.