You're Never Too Old for Drive-Thru Road Rage

Sometimes old men want to punch you in the head.

Most of my mornings don't differ too drastically from other mornings. I never forget to feed the dogs. I never forget to set the alarm. And I'm almost never threatened to be smacked in the fucking face by morbidly old men. This morning, however, was a little different than most. 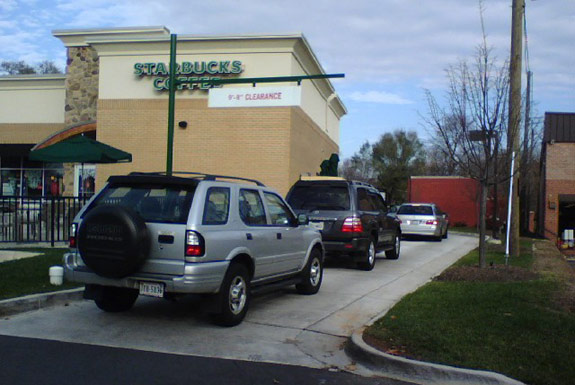 We're gonna need to back up a little…

It started like any other day. Me, NPR, and the Starbucks drive-thru. I was three cars back, patiently waiting while two pretentious voices on the radio debated whether or not Donald Trump was "presidential." The real debate, in my opinion, should have been over whether or not he should be fired out of a circus canon into a brick wall. Not for his comments, or policies, but just for looking like an old, creepy orangutan.

The windows on this ‘Murica-mobile were too darkly tinted to clearly see the heaping sack of donkey shit behind the steering wheel, but I know he saw me. That's when it happened.

Just as the short, caffeine-deficient cavalcade I was in pulled forward, some douche-eating bucket of buttholes sped around a corner, and cut in the drive-thru line. Initially, I thought he just didn't see me. He'll look to his left, see that I'm there, and then politely back the fuck up.

Only he didn't move. And I was not happy.

I thought briefly about muscling my way back around him, but knew that wasn't going to work. He was in a gigantic, jacked up Ford F-250 with a "Guns Don't Kill People, I Do" decal and a freshly polished chrome nut sack swinging triumphantly off the back bumper. I was in my tiny-ass Nissan Versa that I'm convinced was built with aluminum, cardboard and sadness. Great gas mileage, but I was fucked if a strong breeze ever hit me on the freeway.

The windows on this ‘Murica-mobile were too darkly tinted to clearly see the heaping sack of donkey shit behind the steering wheel, but I know he saw me. I know he saw me glowering. I know he saw me mouth the greatest two-word combination mankind has ever developed. I know he saw my gloriously erect middle finger standing proud in the fledgling sunlight spilling over the horizon. I know this because this turd sucking tampon had the goddamned audacity to rev his engine at me…twice.

I was becoming less happy.

My horn, a suitable fit for a car of such sad quality, wailed like a baby otter being stepped on. It was loud. It was annoying. It was exactly what this bottomless pit of smegma butter needed to hear.

That's when things got interesting.

The driver of the truck, apparently enraged by the incessant honking, flung his door open. Only the driver wasn't the 21-year-old frat-boy douche I was expecting. He was old. Really, really old. Clint Eastwood in Gran Torino plus 30 years kinda old.

And. He. Was. Fucking. Pissed.

"What?!!?" He hollered in a menacing tone I assumed he developed over several decades of yelling at kids to get off his lawn.

There were so many questions I wanted to ask him. What was the scariest thing about World War One? What was it like the first time you saw a "talkie" picture-film? How did the advent of electricity influence your youth?

But, I didn't ask any of that. Instead, I sheepishly said, "Did you not see me in line?"

His eyes were wild, and thin wisps of his silver hair shuddered in the wind. "Fuck you!" he shouted while thrusting a Crypt Keeper finger in my face.

Regardless of age, when someone says "Fuck you" it's a natural instinct to cuss back. So I did. A lot. But, it wasn't until after I offered several suggestions of things he could use to fuck himself with that he hollered, "You're lucky I don't smack you in the fucking face!"

I had to hand it to the guy. He had balls. Saggy, weird looking balls I'm sure, but balls none the less. He wanted a fight, and had I not been so sure he would have exploded in to dust, I might have given him one. But, I took the high road. I stayed in my car, and watched as he ambled back into what I can only assume now was his great, great, great-grandson's truck.

Nothing else happened after that. He got his coffee, I got mine, and we drove off in separate directions. Slowly, my temper cooled. I took a couple of deep, calming breaths on the drive to work and reminded myself that I shouldn't allow my day to be ruined by one negative person. I should be happy because I'm alive. Happy because I'm healthy. But, most importantly…

Happy because that crotchety old cocksucker will be dead soon anyway.

Related
Why You Never Ask Strangers in the Elevator If They Want to Get Drinks
Tanner Garrity
I’m Dating (a Cup of) Joe and I’ve Never Been Happier!
Rhea Kumar
I’ll Never Forget You or Your Wild Accusations, But I’m Still Moving Out
Emma Marks
Resources