Suburban Dystopia: The Decline of the Shopping Mall

The other day I begrudgingly entered into Satan's opus, a cornucopia of greed and wickedness better known as the shopping mall. I know off the bat that sentence must sound a little harsh. After all, most of us spent our formative years hanging out at our local malls; we all played our unique roles in populating those suburban jungles, and it was a beautiful thing.

The japs started learning the rituals of their mecca that would become essential to their survival at an early age, namely, how to swipe a credit card though a machine and a dick through their mouths, though not necessarily in that order. The skaters helped keep security's fat asses in check through their lovable delinquencies, and their truancy created the model for rebellion which years later most college students would inevitably follow. (I would say all college students, but a tool is a tool is a tool.) The stoners hung out in the parking lots mostly, baking cookies or something–I forget. Even the wannabees got to interact with other people, even if it was limited to waving at the cool kids from afar and stalking the custodians. And so on and so forth. If I didn't mention the particular clique you belonged to, it's because I forgot you or you just plain suck (I'm looking at you, goth kid). 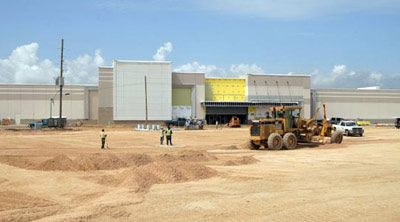 Where's Paul Blart when you need some excitement?

Malls used to be about small businesses, and clothes helped people develop their own sense of self. People spent years putting together a wardrobe that not only was comfortable but helped them feel confident in who they were. Now, all you can do is buy into a commercialized package of a different type of personality. Your parents give you money instead of love: buy True Religion jeans (that'll show ‘em.) You claim to hate Abercrombie & Fitch but in reality you can't afford it: hello American Eagle. Some of you must be thinking, "That's not me. I rock my own unique style and I put a ton of effort into making sure the rest of the world knows it." Thank you, Hot Topic. Your contributions are appreciated. By the way, have you met my friend Urban Outfitters?

Still, I would be able to get past all of this if it weren't for one simple fact: my neighborhood mall no longer has a toy store. Toy stores are to kids what Amsterdam is to adults: the embodiment of everything that is great about life. What kind of Nazi bastard decided that we had space for three Starbucks in one freaking mall but that toy stores didn't make the cut? Show me a kid who doesn't like toy stores and I'll show you my foot up your ass. I know that doesn't make sense, but it sure as hell made me feel better to say it.

I'm not sure how I feel about the disappearance of the pet stores. I have mixed reactions to those places. I'm all oooooohs and aaaaaahs for the first two minutes, and then a puppy gives me the sad face and I remember that a life form is being sold, behind a glass partition no less, without any background checks into the qualifications of the purchaser or any follow-thru to ensure quality care was provided. It's about that time I start scheming daring rescue attempts and trying to calculate how many puppies I can fit in a trench coat. This inevitably leads to the question of where the hell would I get a trench coat in Florida, and its unavoidable follow-up, wouldn't it be quite suspicious if I showed up wearing one? Ah, to hell with it. After rereading this last paragraph, I am now sure how I feel about pet stores. Hate. Disdain. Confusion. Sadness.

I think in my rambling, I at least touched upon the point I was trying to make, but just to be safe, let me spell it out for you. Malls represent everything that is wrong with society. Instead of being places that make it easier for us to buy everything we need in one place, as they were originally intended to be, they have become purveyors of overpriced commercialized versions of the products we need. I would say "desire" in place of "need," but we tend to want exactly what they tell us to. I'm not sure who they are, but if one of you could help me out with that, I'll make sure they get a stern talking to.

Rent has become so astronomically high that a small business has literally no chance of surviving, swaying the balance of power away from the people at the expense of the average consumer. That's you, dumbass, in case you were wondering. Furthermore, the mall's status as the watering hole of our communities has dissipated with the enforcement of loitering statutes. I can't remember an evening that I spent out between the ages of 12 and 16 that did not involve me and my friends loitering in our constant pursuit of female companionship. Our penises got very lonely, hanging in our pants all by themselves. At least in that regard, from what I understand, the mall is still the go-to place for teens looking to score some ass, a sole redeeming factor for an institution that has strayed far from the point of no return.