Fear and suspicion of undocumented immigrants has led to a showdown of sorts. The issue is a polarizing one, with some showing compassion and welcoming the alien merely seeking refuge from hostilities aboard. Others, however, see this as a threat to employment, welfare, security and overall stability of the homeland. 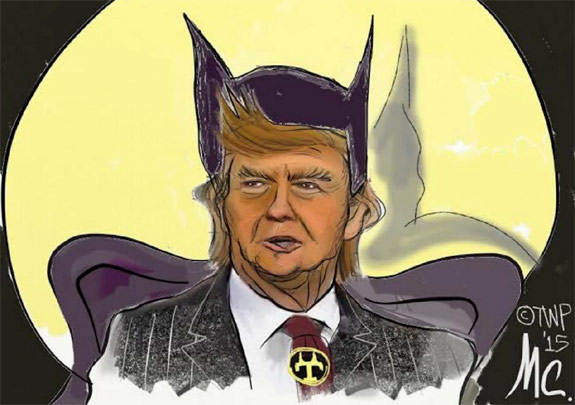 None have taken a stronger stance than billionaire mogul and business tycoon Bruce Wayne of Gotham City, waging a war of aggression against one such alien from Krypton. In a recent press conference, Wayne said the following, "When Krypton sends it's people, they're not sending their best. They're sending men of steel, blending amongst you with a simple disguise, maybe eyeglasses, waiting to wreak havoc and some, I assume, are good people."

The Daily Planet, often a Wayne target, has expressed sympathy, painting the alien as a savior and exemplary resident of Metropolis. "He's here to help," said Clark Kent, Daily Planet reporter. "People like Bruce Wayne need to check their xenophobia before vigilantes begin taking matters into their own hands."

One such vigilante, Batman, whose actions surprisingly parallel Wayne's rhetoric, seems hell-bent on destroying one alien locals refer to as "Superman." Despite, we assume, being told he is a mere mortal—while Superman is more powerful than a locomotive, faster than a speeding bullet, able to shoot laser beams from his eyes, and so on and on—Batman is attempting to rein him in. "We used to think Wayne was nuts, but Batman is out of his damn mind," read a recent editorial in The Daily Planet.

Opinions are as varied as the sides involved. Wayne has painted the media as parasitic sympathizers, with no loyalty to the citizenry. "They take jobs away from good Americans. Batman was perfectly capable of fighting crime and protecting Gotham, but here comes this "man of steel," willing to work for less, no health insurance, doesn't ask for overtime pay, how can you compete with that? It's outsourcing at its finest and we're tired of it. We need to bring these jobs back and make Gotham great again."

To date, only one reporter, Lois Lane, has been able to reach Superman for comment. "We can't overstate the devastation on Krypton. The place is a disaster with marginal employment prospects or a dim future for young people seeking education," Lois wrote in a recent expose. "Superman is looking for a better future; we shouldn't turn him away and think we're innocent from perils we've caused abroad."

Some are calling for a revolution. "We need a superhero revolution. Superman and Batman are just two men, our approval rating amongst women is the highest of any campaign," said a prominent independent senator. "I'm calling on everyone—men, women, superheroes—of voting age to turn out. The more voters, the higher the likelihood we will win."

Others simply feel an extension of current policy is the best way forward. "If we look at what our president is doing and has done, it's working and I'll carry it forward. There are just too many men involved in this whole process; we need a strong woman," said a former secretary of state.

A Southern senator strongly disagrees with such sentiment, countering with his own calls for justice: "Metropolis is a catastrophe, Gotham is in chaos and it is all due to the current administration and New York liberals the world over. We need to continue monitoring and policing Superman and people like him despite what experts in the law enforcement community have proven or stated. Lastly, I'll say this, Bruce Wayne needs to keep my wife out of his mouth—wait that came out wrong. Wayne, stop messing with my wife—oh man, hold on a minute."

Residents will soon settle this debate at the ballot box, with primary elections ongoing throughout the country.

"Our second amendment is pointless," said a resident looking to deport Superman. "I mean, the guy can outrun bullets for god's sake."

"Unless you're Native American, you or your ancestors were once Superman," countered an alien sympathizer. This will go down as a historic election, one not seen by man- or alien-kind in centuries.

Stop saying “you are what you eat,” it’s making me crave employed people.