Coverups for the most common events you will encounter during your Spring Break trip to Las Vegas.

For a vacation spot that encourages, nay, demands debauchery at every turn, it's odd that Vegas isn't the most popular Spring Break destination, considering it can match, if not beat, any other vacation spot around. Want a beach? Hey, there's a desert! Want to mingle with other college kids while drinking? Here's a middle-aged cocktail waitress! Want blue skies and warm weather? Here's neon and air conditioning! Want to have the time of your life? In Vegas, time doesn't exist! Who cares if it's 4am—back to the craps table!

Besides, how many other Spring Break vacation destinations offer the opportunity to make this panicked phone call to your parents: “I need two grand for a gym membership or they're gonna take my thumbs!” Not many, friends, not many.

And if the popular slogan, “What happens in Vegas, stays in Vegas” is any indication, tourists can get into more than a little bit of trouble when they visit Las Vegas—which is exactly what Spring Break is all about.

Perhaps it's just that threat of life-ruining shenanigans that keeps students away. What to do? Well, here's a solution you didn't ask for. While the website visitlasvegas.com claims to offer cute alibis for one's misadventures in Sin City, frankly they're not all that convincing. Below, however, is a list of alibis for the common events you will encounter during your Spring Break trip to Las Vegas, ensuring that your friends and family will never find out just how much of a monster you really are.

Situation: Boy, blackjack really seems easy. Turns out, it's not. It's actually quite complicated. It seems like only minutes before you've blown through all the cash you had for the trip. Of course, if you could just get hot one time, you could win it all back…and more. At least that's what you tell yourself as you max out your credit cards. Welcome to Vegas!

Alibi: “Wow, I got off the plane and, just wow. It absolutely took my breath away, all the neon and splendor of the Strip. I spent all day and night walking around just taking it all in. I didn't even need to gamble to get excited; it's that amazing!” 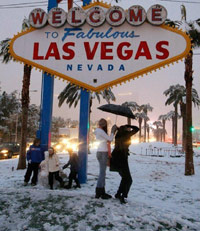 And here I thought it was only snowing in my head…. I'll have to assume those are now my kids too?Situation: You just got a quickie marriage to a foreign cocktail waitress whose name you couldn't pronounce even if you weren't drunk. And God knows you were drunk. Your judgment must have been effected by her crying about needing a green card to stay in the country and the countless drink vouchers the casino threw at you. You're not entirely sure how you ended up at the chapel, but now you're married, your wallet is gone, and you owe her father three cows and a goat as “tribute.”

Alibi: “Have you ever played at DragonRidge Golf Club? My God, it's really breathtaking. And the air out there is so thin, the ball just goes forever if you get a good hit on it. I played 36 holes and would have made par if only my short game was a little bit better!”

Alibi: “Hey, did you guys know that they filmed a season of Real World in Vegas? Yeah, I saw where they stayed. I tell you what, as nice as that place is, I don't know if I could stay there for six months. Even as someone as straight-edged as myself could get into trouble if I was in town for that long!”

Situation: After breaking down and consuming nearly every drug known to man, including a new designer one named “Haley's Comet,” you stumbled along the Strip in a Hunter S. Thompson-like stupor. Unfortunately for you, Haley's Comet fills you with an indescribable fury and moments after you “shoot the star” you wander into Circus, Circus in a bezerker rage. Anyway, long story short, you just stabbed a clown to death.

Situation: It's so damn hot! So incredibly hot! Who the fuck would build a city this close to the sun? Maybe it's the booze, or the drugs, or the fact that you haven't actually eaten or slept in four days, but you're really starting to lose touch with reality. You're regressing back to an animal state. Maybe a cool swim will refresh your body and mind. It probably would have too, if you had decided to take a swim in an actual pool. And just like that you are no longer allowed near the Bellagio Hotel, its fountain display, or the hundreds of tourists that saw you strip off your clothes and dive into the water ever again.

Alibi: “Did you know over 400 tons of cement went into the building of the Hoover Dam? Man, I learned all kinds are crazy facts on that tour. In fact, it was so interesting, I went twice!”

Situation: It's 3:30am and you've just come to. You've not sure where you even are, let alone how you got there. All you do know is that everything in the room is covered in blood. Perhaps the drifter in the corner could tell you what happened. Unfortunately, his head is nowhere to be found.

Alibi: “I saw Wayne Newton! I know, I know, I thought he was dead too. And I'll tell you what, for an older guy, he puts on a hell of a show. I'd go see him again if he ever plays around here.”

Situation: The last was of crumbled bills you had in your pocket went into disposing bodies, bribing local officials, and the breakfast buffet at the Sahara (it's world famous!). You're forced to sexually service random strangers in a truck-stop men's room until you earn enough to buy a bus ticket home. And a bottle of Scope. My God did you need that bottle of Scope.

Alibi: “My plane was re-routed to Madison, Wisconsin. I sat around my hotel room and watched classic Packer games on TV. Now let's never speak of this again.”

Related
Cute Winter Date Activities To Do Right Before You Break Up
Elsa Nierenberg
I’m From New Jersey and Yes, Bruce Springsteen is My Biological Father
Jackson Weaver
ICE-breakers: Fun Games for Agents and Immigrant Children
Samuel Allemang
How to Survive a Break-Up: 10 Guidelines of Emotional Support
Wesley Jansen
Resources