The Express Oil Change from Hell

Oil Can Henry's requests permission to lube you up and bend you over.

In my life I strive to avoid two things: inconvenience, and brainless idiots. Yet somehow I managed to find a place that conveniently carries both under the same roof: Oil Can Henry's. It's like some sort of "Teenagers Stricken with Fetal Alcohol Emporium." And they're even ballsy enough to call these people "employees." I think "employees" is used graciously in this context because it implies that they're doing a specified job for a previously agreed upon hourly wage. I assure you they are providing no desired service.

Whatever diabolical genius created this chain of establishments in no way designed them to be a place where one would actually get their oil changed. On top of that, he had to have gotten the government in on it all to subsidize his payroll for all the retards they hire.

He offered to take out the oil they used and put in the cheaper stuff. I needed to get back to work so I said fuck it, let's just wrap this up.
Allow me to elaborate and describe to you my first visit to Oil Can Henry's.

I'd moved to a new area and needed to get my oil changed one day on my lunch break from work. Some co-workers, who I see now clearly hated me and only wanted to torture me, suggested Oil Can Henry's. If camels needed oil changes this would be the perfect way to catch all terrorists. Screw waterboarding and other "advanced interrogation techniques," a trip to this little diddy of a business would make anyone talk just for the chance at a reprieve. 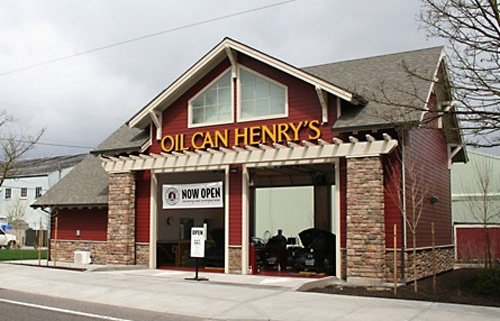 I pulled up to find it's a drive-thru-style oil and lube shop so you stay in your car the entire time. Okay, I can handle that. Upon pulling in the driveway, an attendant who looked like the pedophile uncle of the Pep Boys came out and handed me a copy of the day's newspaper and what looked like a kid's menu from Denny's, sans crayons. The menu was just a single sheet of paper that listed all the services they offer. As for the newspaper, I didn't even get a chance to ruin the nice fold in it because there was no wait at all—in fact there wasn't even a single other customer. This should have been my first warning sign. I realized later there wasn't any line because people would rather brush their teeth with a shotgun than go through that level of hell again (the 7th circle of Dante's Inferno).

The Deliverance reject then flags you into the garage where he immediately begins to bombard you with questions. This is where you say goodbye to the newspaper and any thoughts of reading it. Every time there is a pause and they give you just enough time to reach for it, they hit you with another barrage of questions. It's all a ruse to make you think the newspaper industry might be making a comeback.

After the automotive shakedown of questions, they move into having you flip your turn signals, flash your high beams, etc. Which is all well and good if I was working at this damn place! Why am I doing this? I came here to get my oil changed, not spend my lunch break having some kid who doesn't know left from right because he only knows how to race his Camaro in a circle ask me to turn on my left turn signal. He could've said, "Hit your left signal," and I could've popped my trunk and gotten the A-OK.

This is when it got really good. After you pop your hood, they pull the dipstick and come to your window to show you the oil level. Do you think I need to see the oil level? I came here for one reason: to get my goddamned oil changed! As if as soon as they showed me my oil level I was going to slam it into reverse and start spinning doughnuts in their parking lot screaming, "Fooled you! I never even needed an oil change! AHAHAHA!!" I'm not changing my mind no matter what the dipstick reads, I'm still getting my oil changed! This would be like going in for a kidney transplant, having the doctor remove your old kidney, then waking up and having the surgeon say, "You see, this is your old kidney. See how it's dark in color and emaciated looking?" No one is backing out at this point. The overweight, diabetic black guy is still getting his kidney transplant and I'm still getting my oil changed. And I'm just kidding, it's not an overweight diabetic black guy… like they'd waste perfectly good organs on anyone darker than Tom Petty.

Finally, they ask you what kind of oil service you want. There are different types of oil and grades depending on your mileage, etc, as I'm sure you know. I drive a decent car with relatively low mileage and I don't drive it rough or often so I always go with the basic, cheapest conventional oil option. This is where I felt like I was trying to communicate with the Helen Keller of the Mashco-Piro Tribe. The Select Conventional is $29.99, and the Castrol GTX with TriShield Technology is $39.99. These are the names on their price list. (This fact is important to the story.)

So I told the guy to give me the Select Conventional. After a thorough interrogation worthy of a single light bulb in an otherwise dark room with two men in dark suits playing "good cop bad cop," we were finally done.

I'm confused. Wasn't the basic service $29.99? He explained that he thought I meant the other one. Really?! Because "Select Conventional" sounds a lot like "Castrol GTX with TriShield Technology"… I see how one could get them confused. He offered to take out the oil they used and put in the cheaper stuff. My lunch break was almost over at that point and I needed to get back to work so I said fuck it, let's just wrap this up.

To make up for the mistake, he offered me a $15 off coupon for next time. Just as I was leaving, hanging on to my last shred of sanity, I looked down at the coupon to see it expired in thirteen days. Perfect, because I'm going to go drive my car 3,500 plus miles in the next two weeks just so I can come do this retarded dance again? I'd rather go to one of these "employees'" single-wide trailers with a recliner on the porch and drink Busch Light all day while watching NASCAR and waiting for their cousin-wife to bring us another helping of roadkill.

To top it all off, the next day my check engine light came on and the car has never been the same since.

Fast forward several months later and I'm under duress. Suddenly I had to leave town directly after work, same-day notice, and I didn't want to make the drive without changing my oil first, because I was overdue. My lunch break came around and I bit the bullet, hoping it was a fluke the first time.

That's right, I went back.

Same as before with all the hoopla, but this time when he asked what kind of oil service I wanted I was very explicit. "The Select Conventional. The basic one. Your cheapest one." I even pointed to it on the menu.

After he was done, he came up to the driver's window.

I told him I wanted the Select Conventional that costs $29.99. Then he had the nerve to tell me that the Castrol GTX with TriShield Technology is a conventional oil also, so he thought I meant that one.

I continued losing it.

Best part is, they said my rear passenger tire was low also so they filled it up. The next day the tire blew out because they had over filled it.

A Puerto Rican hooker who's never even seen a car before could change oil better than these guys.

Related
Six Stories from Working at a Southern Thrift Shop
Cole F.M.
Five Places I’ve Had to Call My Mother From on Her Birthday
Rale Sidebottom
Tales from the Megabus to Make You Un-Miss Travel
Ramsey Daniels
Selected Readings From the Book of Influencers
Graham Nelson
Resources