Treat everything as a learning experience, and you'll be a much healthier person.

I bet we all have a lot of embarrassing things we did when we were younger. I know I do. I can remember when I was little my parents used to monitor the things I watched on television so I wouldn't repeat anything I heard or saw at school. So, naturally I grew up watching a lot of History Channel and Animal Planet. And although I never got in trouble for swearing, I was consistently sent to the principal's office for pissing on my locker and quoting The Nuremberg Trials. 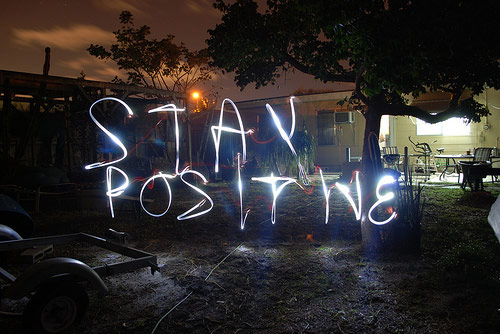 Every now and then while I'm just sitting around doing nothing, experiences like that creep out of the graves I buried them in and show their ugly faces again. Sometimes I look back at the situations I put myself in and just shake my head. Oftentimes I go against my better judgment, because I'm naive or just plain stupid. Like if I had a time machine and I could go back to any point in my life, I would go back to that one time when I found out that girl I met online was actually a really feminine transsexual man. I would remind my past self that people aren't always who they appear to be. I would also remind myself to bring two condoms and A LOT of hand sanitizer.

Take a good look at yourself. If you don't have any scars then you wasted your time on this Earth. You always have to look for a positive though I suppose. You'll drive yourself crazy if you don't. Every experience, positive or negative, should be examined and treated as a learning experience. Hindsight is an important thing, my friend. It helps you understand your past, so you can better navigate your future. We can all look back at ourselves and choose to be embarrassed by the ridiculous clothes we wore, or the hairstyles we rocked, or we can look back on those days and say, "Hey, those were some pretty awkward and confusing times, but I met a lot of interesting people in that cult."

I once met a really nice guy who made me reevaluate how I view the past, a guy who I now consider a dear friend. I met him in the basement of an old shipping warehouse during a cock fight in the Philippines around 2008. His name was Pokey, and despite the fact that he was missing an eye and his left hand was mangled and unsightly, he was as calm and gentle as the Pasig River that runs through Manila.

One night while a bunch of us were shooting guns at his neighbor's goats I pulled him aside behind an old shed near a papaya tree. I asked him what happened to his eye. He said that back in 1969 during The Moro Conflict a group of insurgents invaded his village. He was one of the few people who fought back against them, losing his eye to a knife during the assault.

I asked him if he had any regrets and he said, "AJ… I would go back and do it again, and they could have my other eye. Every morning when I wake up and look in the mirror I see this scar and it reminds me to always do what's right. Even if you have to lose an eye to do so. One of these days you're going to be laying on your deathbed; take a good look at yourself. If you don't have any scars then you wasted your time on this Earth."

I was so inspired by what he said that I didn't even mind that he was urinating on my foot.

I then asked him what happened to his hand and he said, "I dropped some Skittles into a garbage disposal; I have a bit of a sweet tooth."

Then, as he shook off the residual urine from his urethra and zipped up his pants, he gave me a wink and reached out his hand: "But enough about me for tonight. Let's go throw a grenade into Hank's chicken coup."

As I took his hand I imagined that those lifeless, disfigured fingers of his were grabbing mine, and as I breathed in the hot, humid air of that Filipino night I looked into the sky and thought that even though I have moments I wish I could change, they're each a scar, and scars are cool.

Related
Does This Crippling Existential Dread Make Me Look Fat?
David Olson
Other Things Jared Kushner Looks Too Young For
Bill Reick
Everything I Hate About My Favorite Movie, Frozen
Ash Davis
Resources