The key to attracting interest to your writing is to have a relevant, catchy title. The sanctity of one's asshole is as relevant a topic as there is. Not very catchy though.

Step 2: Don't bother. If a goat wants to plow you from behind then it is going to happen and there's nothing you can do to stop it. He'll probably finish up with a hot carl ‘cause goats are crazy like that.

Speaking of goat fucking, I have been watching a lot of television lately, as I have recently graduated from college and am in the process of extending my post-school/pre-grad school vacation for as long as possible. The passing of the Incomparable Billy Mays has left a void in the world of television infomercials and shady, backroom drag shows for bearded cross dressers, but more notably, the TV thing. The man's uncanny ability to force anyone within earshot to buy stupid shit that they didn't need was truly inspiring. He could have sold a 2-foot dildo and a clitoris pump to a celibate nun.

But I'm sure selling useless crap to dumb people wasn't his only talent. Can you imagine what it would have been like to have him as your wingman at the bar?

The Incomparable Billy Mays: Hi, Billy Mays here for Generic Bar Dickwad A, the easy way to fill all of your orifices fast and keep them filled for days. Generic Bar Dickwad A is a revolutionary product guaranteed to work perfectly on any job, big or small. GBDA won't leave behind a mess, like those other products. Simply knead to activate; GBDA goes from flaccid to erect to show it's ready for sex!

Bar Skank: He looks like a pile of hardened dinosaur shit sculpted into a vaguely human form, but your hand gestures and tone of voice have sparked my interest. Please tell me more. Can it stand up to my massive girth and rows of sharp vaginal teeth? 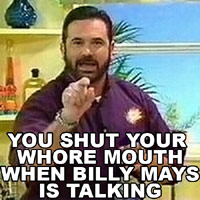 The Incomparable Billy Mays: Order within the next five minutes, and we'll double the offer. You'll get two Generic Bar Dickwads for the price of one! Just pay shipping and handling for the second GBD! Here's how to order.

Bar Skank: Wow, you have convinced me to make sweet love to this awkward, hideous specimen and an equally attractive friend of his, and they didn't even have to say a word.

Okay, so you're going home with a member of the Legion of Doom, but The Incomparable Billy Mays still closed the deal. If you weren't such a douche, he could have sold you to a hotter chick, and you probably could have avoided crossing swords with some random dude.

The career of The Incomparable Billy Mays would have continued to evolve if he had stayed with us. I could see him doing commercial spots for prescription medication in his later years. If he was the spokesman for Viagra, the planet would be vastly overpopulated and every male over the age of 12 would have a constant erection. Alas, that day will not come any time soon, as Pfizer currently refuses to "triple the offer, and send out three boxes of Viagra at the same low price of $19.99 plus shipping and handling." Haha. Handling. Nice.

The man's credibility was already amazing because of his beard and genuine excitement about the product he was selling. Imagine if he was offering you a way to get that fungus to stop growing on your taint. You probably didn't even notice it until Billy told you. We all owe him a debt of gratitude.

For the record, evidence of The Incomparable Billy Mays' goat-related adventures is anecdotal and circumstantial. But anyway, to my original point, watch out for your cornhole when there's a goat around.

Patient: (moving his leg) It hurts when I do this.
Doctor: So don’t do that.
Patient: I have to, I’m an actor.
Doctor: Can you do it differently?
Patient: Well, I’ve wanted to get into directing for a while.