How I Learned to Stop Worrying and Love the Bird

Animals can be assholes too.

The clock seems stuck at 6:18 PM. I am attending my third Post-Traumatic Stress Disorder support group meeting and this session, like the other sessions, is dragging on. Annie is again recounting her harrowing encounter with a jar of pickles that simply would not open. Charles still has frequent panic attacks as he remembers that one time someone called him fat in sixth grade. He puts down his bag of Takis to wipe tears from his face. 6:19 PM. 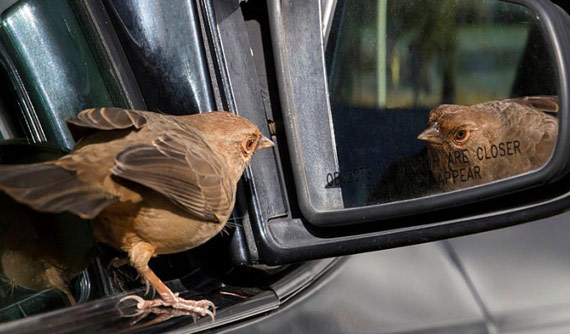 Rachel, our moderator, nods with a false solidarity that makes me roll my eyes hard enough to cause a nosebleed. She address Charles, then the group, saying, "Charles, thank you for sharing. Guys, what Charles' story tells us is that sometimes hurt-hurt doesn't hurt as bad as word-hurt." My internal groan must be visible on my face, as Rachel holds her gaze on me for just a bit too long.

"Skywalker," to avoid giving out my real name I've told them my parents were avid Star Wars fans, "this is your third session yet you still haven't come out of your shell."

The pain I carry within my heart is enough to break most men. They cannot be made privy to my soul and all the madness contained therein. "I used to bullseye womp rats in my T-16 back home; they're not much bigger than two meters." Instinct.

"You're quoting again. Remember, you're Skywalker the man, not Skywalker the character." A part of me wishes I had told them my parents named me Jar Jar. "We've discussed your parents and their… interesting name choices for their children, but we haven't discussed much of you. Why don't you start with what brought you here? What was the moment that made you realize your burden was too great to bear alone? What made you need this support group?"

I gesture to my peers. "Dey not ready."

"Hey asshole, all I've done here is bare my fucking soul, okay?" Tim, a man recovering from four years spent wearing all of his shirts inside out, stands to drive home his indignation. His fly is open; I say nothing.

Turning back to me, she says, "We are here to help you. Each one of us knows that sometimes life can be just a bit much to handle on our own."

"Yeah, especially with Texas weather," interjects Annie, drawing a solid laugh from the group. These people laugh at weather jokes but won't even politely smile during my what's-the-deal-with-postmodern-literary-theory bit. Fucking plebeians.

The pain I carry within my heart is enough to break most men. My steadfast defiance in refusing to share with my peers is not meant to isolate myself; it is meant to protect them. To stare into the abyss that is my agony is to watch with glassed eyes as one's humanity drifts into nothingness, never to return. No, no they cannot be made privy to my soul and all the madness contained therein.

"Just this one time, Skywalker, and you won't be forced to share ever again. Please."

Her persistence serves as a prelude to the death of her own innocence.

I sit up on my exercise ball (we have all been sitting on exercise balls instead of chairs, I'm not sure if that is relevant information) and begin my story in earnest.

"I had went out for a Sunday drive one early afternoon. It was an absolutely beautiful day, hardly a cloud in the sky. When I close my eyes I can still feel the crispness in the air." I pause to close my eyes for dramatic effect. "The sun was shining, children were playing, Donald Trump hadn't begun his run for the presidency. Chuckle, yeah, those were good times. But they weren't to last."

My peers have ceased gently bouncing on their exercise balls as to better hear my tale of woe and misfortune.

"I… I get to a stop sign. I stop because… it was a stop sign. One of the red ones, y'know? My window was down, so I took in a deep breath to absorb the freshness of the day and… that's when he came in.

"A small bird flew into my car. He seemed nice at first, and I even thought he was kind of handsome. He rested on my wheel ever so gently, and sang the most beautiful of songs. But then I left the stop sign, and he wasn't so nice anymore. He started violently flying inside of my car. The window was open so I tried to politely shoo him outside but he just wouldn't take no for an answer. I remember smelling alcohol on his beak.

"And then… and then… he…" tears are welling in my eyes, "…he shat all over my car. I had never seen a bird or any other animal shit so much in my life. He shat in the back seat, the front seat, he shat on my dashboard, he shat on the doors and he…" Unable to maintain eye contact with the group I stare at the floor and whisper, "he even shat on me. Like I was a whore.

"When it was all over, he didn't say anything. He just took my dignity and left me on the side of the road covered in bird shit. I just… he… oh god." I am sobbing uncontrollably. "Oh god why? Why?!" The group, with nary a word, gathers around me so that we may all embrace. For the first time in a long time I feel a sense of hope for my future, a sense that my wounds will heal yet. Perhaps there is life after bird shit?

As we hug it out I look up at the clock.

Related
How I Finally Pooped on the Bird That Pooped on Me
Ram Ray
I’m the BBC Earth Hummingbird, and I Did Not Consent to This Use of My Image
Catherine Davis
The Only Post in r/BirdLovers
Nick Matthews
Resources