On this sad day I dropped my model crucifix down my shower drain. I was distraught. I took out my anger by not respecting thy mother and father (I used my dad's shaving foam and my mum's razor to shave my unmentionables), but felt so guilty I decided to add another verse to the Bible entitled "Putting the sin back into cosine" where I systematically prove, using trigonometry, that maths is god's greatest enemy. I happened to mention this to one of my non-Christian enemies and he asked me if I understood irony, which I of course don't; "irony" contains the word "iron" and iron is used in science, and science is another enemy.

My crucifix appeared on my pillow today with the top section removed leaving a "t" shaped model. I am debating with my priest whether this is a sign from God that I should begin to worship Mr. T. So far, all we can confirm is that the letter "t" is a new ally in our constant fight against the non-believers. Later in the afternoon I saw a rat with the missing part of my altered crucifix in its mouth. I followed it, pondering whether this rat was the reincarnated Jesus, until it unfortunately became horrifically dismembered by a mouse trap. I now wear a mouse trap around my neck alongside my Mr. T crucifix. 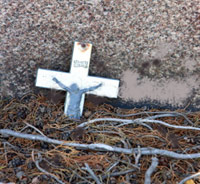 Feeling blue? WWJD?Today I watched several episodes of The A-Team to investigate my newfound idol. I admire his sympathetic attitude towards the less intelligent members of our society, as he is often "pitying the fool." Last night I foolishly left my new crucifix unattended, and when I returned to the scene, it had again been tampered with. This time, the bottom section had been displaced, leaving a shape much like a capital "i." Upon investigation using Google, it seems Mr. I is awfully close to MRI, the devil scan used to identify fake weaknesses in the perfect human form. I immediately rung up my priest; he is coming over tomorrow to exorcise the demons that are clearly present in the crucifix. He's bringing the holy water; that's how serious it is.

I don't care for carbon dating, I prefer to date humans, you rock fucking scientist!"The devil makes work for idle hands." This was my father's excuse for getting caught playing with our donkey's genitals; he needed to keep his hands busy. I don't believe him, but I forgave him anyway, even I often get lost in Donkey's exquisite eyes on a lonely night. The evil crucifix has left the household; my father made me a new one by weaving together the stray hairs of our dear donkey. I recommended that he continue weaving to keep his hands busy, as genital fondling is only appropriate on anniversaries, or when my priest comes over when my parents are out.

"What if God was one of us, just a stranger on the bus." I ask myself this every day, and this has led to many awkward conversations with tramps on public transport. I considered giving up my cushy lifestyle and living like one of these lesser beings, but I realized that I would be unable to continue my online debating under YouTube videos. Some guy said that the earth was billions of years old; I shut him up with my retort, "The Earth is 6,000 years old! I don't care for carbon dating, I prefer to date humans, you rock fucking scientist!" I'm considering a career in writing when with one-liner putdowns like that—watch this space.

My girlfriend broke up with me today. We'd been together for nearly two years, and were almost ready for our first kiss. She said it was to do with my father; apparently the demons widened his attraction from donkeys to young school girls because he'd told her he wanted to "hop on the good foot and do the bad thing"—even more disturbing considering she has a prosthetic leg. My priest is coming over tomorrow to begin the exorcism of my father; he's bringing two portions of holy water, that's how serious it is.

Today is the day of rest. For this reason I have been fired from three part-time jobs and have failed all exams that took place on a Monday. Once, I even became unnecessarily trapped in my own home: a fire occurred in my room and I refused to extinguish it or leave the vicinity—a $100 fine for wasting firemen's time is a small price to pay for peace of mind that you will one day spend eternity in God's kingdom. My father has now been relieved from his demons, his subscription of "Donkey Monthly" has been cancelled, and he no longer picks me up from school. Coincidentally, some of the pages of the family Bible have become stuck together—particularly the parts that include the story of Jesus riding into town on a donkey….

Related
Christmas Gifts for the “Creative” in Your Life
Graham Techler
As an Old and Bitter Movie Critic, I’m Finding Third-Act Problems in My Own Life
Kyle Vorbach
Pretending to Be a Dad so Other Parents Don’t Get Jealous of Your Baller Childless Lifestyle
Adrian Davidson
Resources