A couple of days ago I ran upon a site devoted solely to the telling of some of the most gruesome, disgusting, and downright hilarious dead baby jokes I have ever seen. I must admit, at first I felt like I had just purchased a one-way ticket on the train to hell merely by viewing this evil page. But as I continued reading these jokes, I realized I couldn't tear my eyes away from them. I figured that since I was laughing this much it had to be worth a little eternal damnation. I mean, how bad could it really be?

My mother is standing behind me in what I can only assume is the stance a samurai takes right before he beheads an enemy. Everything was going along fine as I was reading this newfound glory site right up until I realized that my mother was standing directly behind me reading these jokes over my shoulder (ah yes, it's good to be home for the summer).

Before I continue my story, let's do a little background on my mother: she considers herself "husky" while I just say she's fat, and she's one of those "repent before Jesus returns and you go straight to hell!" types (unfortunately for her, I've already got a special spot reserved for me in that downstairs sauna). Besides being one of those husky, Jesus types, she likes to wear tight fitting clothing. I guess you could say she resembles a pot-bellied pig trying to pull off a leotard. Now that you're up to par on my situation at home, let's move on with the story. 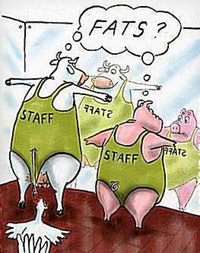 So I'm sitting at my computer, naked, lotion in one hand, Kleenex in the other… Wait, that's another story. But I'm sitting at my computer laughing my ass off while my mother is standing behind me in what I can only assume is the stance a samurai takes right before he beheads an enemy. The worst part is that the joke I was reading at the time was probably one of the worst I've ever heard. This particular joke was, "How do you get a baby out of a blender?" Answer? "Tostitos." I know I know, I'm going to hell because joke I laughed so hard at that joke I almost threw up all over my boobie mouse pad. Thank god I didn't because I love that thing more than life itself.

Anyway, the fact is, my mother caught me looking at these God forsaken jokes on the Internet, which she already dislikes because it's one of "Satan's Creations." So now the secret is out that I'm a closet dead baby joke teller/reader, and my mother cannot believe that I came out of her body (more or less her vagina).

The next step of this story would be to tell you what my mother then decided to do. Well, she decided first that I was in need of a nice, strong, well-practiced bitch slap to the head. I'm not afraid to say that I cried out like a little girl. Most mothers know the proper technique to deliver a good, well-rounded bitch slap, but I'm thinking that my mother could have taught the entire goddamn class on the slapping of bitches. After she felt she was out of bitch slaps, she then proceeded to berate me constantly. You know the nagging that regular mothers do? Like, clean your room, feed the dogs, stop masturbating into my good towels… well this was a whole new playing field. I had been bitched at for everything on God's green Earth, but never for laughing at a baby being thrown into a blender and then being removed from said blender with said Tostito chip.

Long story short, whatever mother-son innocence was left has completely evaporated. My mom now looks at me in a new light—I call it the devil's glow. She's also tightened security on the Internet. I only hope to Christ she never finds my bestiality stash in the box in the basement. So if you take nothing else away from this completely pointless and disgusting story, at least remember this: if you're looking at things on the Internet that you probably do not want others to see, lock the goddamn door.