6 Shitty Jobs You Really Did in the Navy

An ex-sailor dishes on everything from being a cook to a janitor.

We've all seen the Navy commercials "Accelerate Your Life" and "A Global Force For Good." You see all the sailors doing all kinds of awesome shit, making you stop and really think about your life. Well, I was one of those bright-eyed, naive fucks that got suckered into the hype. What they didn't tell you were all the shitty jobs you would actually be doing instead of the jobs they advertise. Here is a list from the least to the worst fucking jobs that I really did. Believe me, it gets pretty bad.

"Join the Navy, See the World!" was how those poor souls were lured into a contract without a guaranteed job and school. I present the Deck Seamen, where the young sailors of the Navy go when they're undecided much like our community college friends. On the plus side, you get four squares, a shower every day, and you're stuck working outside, something your local Home Depot illegals would kill for. On the shitty side, you get treated so bad Dr. King would march for your freedom.

As a Navy garbage man in designated overalls, no amount of Axe Body Spray would make you even somewhat tolerable to be around. The Deck Seamen are in charge of ship maintenance, which includes learning how to deal with line, aka "rope." If you love jerking off, then this was not the job for you. You're better off buying your own pair of gloves because the Navy was too cheap to supply them. God forbid if you were the poor soul tasked with working the Paint Locker. Imagine being stuck in a metal sauna with toxic chemicals for 6 hours a day, pouring and handing out paint that was probably all lead-based. Aren't there warning labels about this sort of thing? Safety was a number one priority though; it's why we had free medical coverage…right?

Not as bad as it sounds, right? I mean, isn't there an Office Bitch everywhere you go? Where's my game show buzzer for WRONG FUCKING ANSWER.

When you don't get that pile of paperwork done by the time your workday is over, your company has a legal obligation to pay you overtime (as much as they don't want to). Well, in the Navy they own your ass. Overtime, just like the unicorn, is non-existent. Since the Navy is trying to be more like a corporation, you have to know Microsoft Office. Not necessarily a bad thing, unless you're old as fuck and don't even know where the power button is. These are our supervisor's people. So if you have a supervisor with no fucking life, then you're stuck there until that mountain of paperwork is complete. Even if you had duty the day before. Which consists of being stuck at work for a full 24 hours.

A lot of the time I made up doctor appointments so I could escape that hellhole. If I was going to get fucked out of my civil rights, then I'd at least like to get a courtesy reach-around.

We all have lovely servers at our favorite restaurants. They're nice and tend to our every need. Well when you get to play server in the Navy, you're feeding 300 to 400 personnel with food marked "Not For Human Consumption." Seriously, prisoners received better food than we did. Ever heard of an MRE? Plus, the only tip you're getting is that dick if you happen to knock some cook's precious meal over after he barely even made it edible.

As a server, you're sent to the kitchen like it's the 1950's and made to serve your work family that you openly hate (ladies you know what I'm talking about). The shittiest part, you're the cook's bitch, as in they own your sorry ass like a pimp owns a whore, for the duration of time you're there. Except there are no benefits and you can't call them "daddy." Personally, Auschwitz looked like Disney World compared to this, but at least at Auschwitz you're put out of your misery.

Like I mentioned, we were sent to the kitchen to teach us something not important enough to remember. Working as a Pot Locker for almost six months made me thank sweet baby Jesus or Tom Cruise for the invention of the dishwasher. Have you ever seen the pots and pans needed to cook for over 400 people? It's fucking ridiculous. You have to stand in the hottest, smelliest room onboard and wash these fucking dishes by hand with some moldy-looking sponges that somehow passed "Navy Regulations." This always ended up being the last chore that needed to be completed before anyone could go home.

Shittiest part, they always stuck the natural fuck-up in there. Granted it was a lot of work and reserved for someone of that caliber of "fuck up-ness," but goddammit, if you didn't keep up with it, you'd be drowning in a sea of bacteria that would make AIDS look like the common cold. Normally I wouldn't complain about this, but this sure as hell was not what I signed up for…. Why am I not flying jets or something right now? Well friend, because you listened to a recruiter that assured you that you would definitely be "Accelerating Your Life."

I can't complain about our everyday Sanitation Engineers, commonly known as "Garbage Men." They do a hell of a job and I'm grateful for what they do. That being said, being a garbage man in the Navy is possibly the worst fucking job imaginable. You know how civilian garbage men have trucks, which separates them from the actual garbage? Well, in the Navy, all you have is a tiny metal room with no air conditioning and garbage from about 400 people to sort through. Just like herpes, it always comes back worse than before.

Shittiest part, they give you designated overalls to work in, which no amount of Axe Body Spray would make you somewhat tolerable to be around. If you were a "green" person, than hearing about how we disposed of the garbage would make you cringe. That's right ladies and gentlemen, we threw that shit overboard… into the fucking sea so that Little Nemo and Flipper can get all kinds of tangled and end up washing ashore and ruining your perfect "beach day." 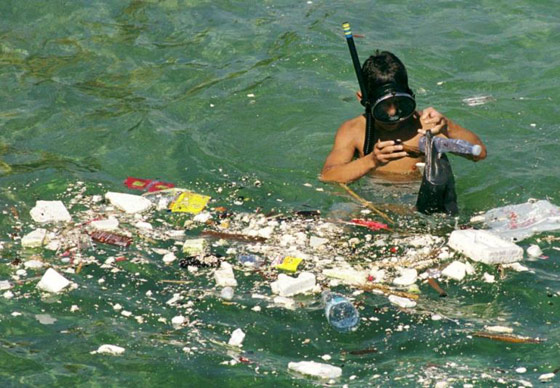 Alas, we're at the number one worst job in the Navy, not advertised about for good reason. As a Navy Janitor, you are the lowest of the low, no matter what your job description was on your contract. You're not one of those kind, wise old janitors from the movies, but a disgruntled, over-worked, unappreciated janitor. Though, much like neglectful parents, as a janitor you really don't give a fuck. You sweep, mop, shine, clean, and scrub anything and everything on the ship at least three times before it's deemed clean enough for you to go home and do it all over again the next day. I had to mop up dirt more times than I can count because asking for a broom is like asking your poor parents for a PlayStation 4 for Christmas. The Navy blamed budget cuts, but thank God we still had funds to make circles in the middle of the goddamn ocean for six fucking months.

Shittiest part, you clean bathrooms used by 200 plus men daily. Yes, people are slobs, but that doesn't even cover the atrocities you find in a Navy bathroom. I've had to clean human shit off the ground and throw up because grown ass adults still don't know how to sit on a goddamn toilet properly.

Don't get me wrong, I had a great time in the Navy and I saw a lot of cool shit. But next time you see a service member, really take the time to thank him or her for their service, because chances are they did a lot more shit than they signed up for.