For the past year I've been living in the mountains of Georgia, because Karma is real and sometimes it holds back for a decade or so and then hits you all at once. If you haven't read the heroic saga leading up to that turn of events then I'm sure my editor will plug it somewhere in this sentence. Good looking out, Court. 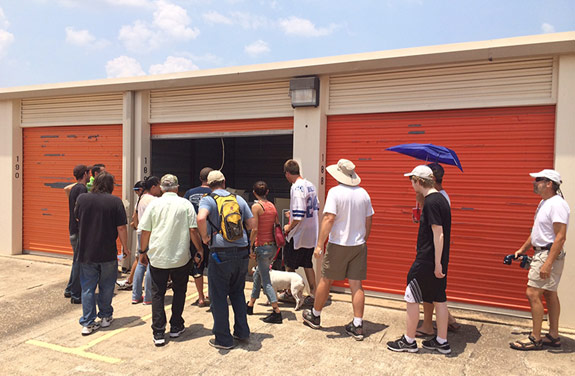 But regardless of the reasons why I'm here, and despite the fact that I'm leaving soon, I was here. So what was I doing the whole time, you might ask, because you're a nosy little shit who doesn't respect boundaries? Well, I've been working, mostly, so I can save the money to never, ever be here again.

I worked at a goat farm for a couple of months, and that was adorable because I got to play with baby goats every day for a while there. That sound that you hear right now is you going "Aww" at the thought of baby goats, mixed in with an internal twinge of jealously. But more importantly, I was working at a fairly large resale shop, doing all manner of things.

First off, I won't tell you the name of the place. They don't need any publicity associated with me saying tubsteak over and over again in reference to dicks. Secondly, I did a whole bunch of different stuff there, and we sourced our product (our product being literally anything we could legally sell) from many different places, but for the purposes of this article, I'll focus on the most interesting one: Storage Wars.

Well, storage unit auctions that is.

For the uninitiated, when someone stops paying rent on a storage unit, the place doesn't just keep the stuff in there forever, and they don't want to move it themselves, either. So what do they do? They auction the unit's contents off to a bunch of mostly overweight, sweaty older men who look they have some very strong opinions on immigration law. People show up, bid, and then if they win, they get a couple of days to cart everything away. The renters legally have up until the last second to pay for their unit, and if they do, it's off the market. But if not, someone like me and my boss will show up and take your stuff.

Here's what it's really like running a real life Storage Wars.

1. It's Depressing As Shit

Back when Storage Wars was first going to go on the air, they were considering delving into the backstory of each unit to try and lend a narrative atmosphere to the show. That was a bad idea, hence why you don't really see them do it on the show.

The long and girthy of it is that most every unit that goes up for auction is filled with the exact sort of stuff that you would probably put in a unit yourself if you had too much shit. Yeah it turns out that there's rarely ever a "not-terrible" reason why a unit goes up for auction, and as such, the whole process can really run your emotions through the ringer if you think about it too much. This is a comedy website, so I won't get into any of the soul-crushing things I've found in units, but more or less the only three reasons a unit goes to auction is because somebody went bankrupt, went to prison, or died. That's the truth. It sucks, but that's how it is.

Some of you probably think me/my boss/anyone who does this for a living is a vulture praying on the misfortune of others. And in the strictest technical sense, we are. But, at the same time, Obama could address the nation tomorrow and say that the practice of auctioning off storage units is suddenly illegal, and all that would happen is that the people who own the storage facilities would just cart everything off to a dump. Because at the end of the day, regardless of the reasons why they couldn't pay, someone rented a space and no longer paid for that space; so it needs to be cleared.

Also, to be fair, most managers don't like sending units to auction–partially for moral reasons, and partially because it's a pain, and they make more money if people keep paying. Also, the law makes it pretty hard to send a unit to auction without lengthy due process.

So, it's in everyone's best interest if the unit stays under the ownership of the person who originally rented it. But that just doesn't happen all the time, because your parents lied to you and the world is filled with a tangible darkness, and that darkness oftentimes just takes a great big dump on people.

One of the biggest misconceptions you'll walk away from after having spent an afternoon binge-watching Storage Wars in your Cheeto-stained underwear, is that every single unit has some sort of hitherto-unfathomable treasure just waiting to be found, lurking in the depths.

The above-mentioned show and its imitators have been accused of, and supposedly outright caught, rigging the tits off of the units. Like, the producers literally have interns put shit in the lockers sometimes just to keep things interesting. Which should be obvious, because if every single unit contained a lost Van Gogh or a copy of Action Comics #1, then wouldn't everyone be doing this?

The long and girthy of it is that most every unit that goes up for auction is filled with the exact sort of stuff that you would probably put in a unit yourself if you had too much shit. Broken chair you swear you'll get around to fixing one day? Check. Old, mostly-dirty kids clothes? Check. Every single plate ever made? Check. Nine years' worth of cable bills? Check. Computers old enough to remember mutton chops as legitimate style choice? Check.

Arts and crafts, kitchen supplies, clothes, and a couple pieces of furniture. These are your predictable mainstays of every unit. Paperwork, old movies, unusable electronics (box TV's, computers still running Windows 98) and more goddamn clothes are also pretty safe bets. Sure, most units will have a couple of easy sells, like a flat-screen TV, or a video game console, or a bunk bed (seriously, bunk beds sell like candy that is also just cocaine), but really, at the end of the day, you're just sorting through boxes of the exact same crap as the last unit. You just hope it's clean and organized this time around.

Because really, if you had valuable stuff, you would either keep it for yourself, or sell it to pay for the storage locker rent you're behind on.

3. It's Exciting As Shit

You know how as you grow up, Christmas slowly loses its luster? Like, sure, we can all pretend that giving gifts slowly overtakes the joy you get receiving them as a child, but I think we all know that's a load of unbelievable horseshit. And yea, it's nice to have an entire time of year set aside for me to binge-drink eggnog in a way that's slightly more socially acceptable, but really, at the end of the day, you never quite capture the magic of Christmas morning again.

Sure, like I mentioned in the last few entries, it gets depressing, and boring. But you know what? At the end of the day, your job is still to dive head first into an enormous pile of unopened boxes and crates and cabinets and hey, there might be something neat in this one.

Most of them are predictable. A lot of them are broken or dirty to the point of being unusable. But sometimes you open a box up and find something cool in there.

One unit we bought for $5 (yes, five; no, that's not normal) had a bunch of pretty crappy furniture and mattresses in the front that nobody else wanted to deal with, so we got the bid. We cleared out to the back and in one bag we found dozens of video games. Smash Bros, Resident Evil the entire goddamn .hack series with the accompanying anime. My boss didn't know what half of them where, but why would he? He's a grown-ass man. He has kids. He has insurance and shit. I bet unlike me he has a diverse portfolio and also knows what that is.

Actual silver and gold are probabilities too, but it's usually only in small amounts. Antiques, collectors' items (stamps, coins, an autographed copy of the script for Pulp Fiction), actual bulletproof vests, anything and everything is possible. If you can deal with all the bullshit packed in around the cool stuff.

It was in a toolbox. Weird, right?

5. What Do You Do If You Find a Body/Drugs/Illegal Bullshit?

At a proper, legally run storage locker, they'll usually pop the locks off then and there, and everyone gets to look inside together right before the bidding starts. So if there's just like, most of an accountant scattered around a unit with what looks like a very extensive machete collection, then the auction is canceled and the goddamn cops get called right away. Although in most states, the managers open the units beforehand and put their own locks on, for this reason, and several other legal ones.

Same for drugs. If you find them, you report them to the cops. Same for anything that should technically be reported to the proper authorities in any situation outside of a storage auction. However, due to the risk of the police confiscating everything in the name of evidence, it's likely that these situations often go unreported.

Also, guns. You have to turn those in.

And lastly, personal paperwork (IDs, passports, birth certificates, etc) have to be turned in to the facility where you bought the unit, and they have to surrender them if the previous owners of the units ask for them.

And that about wraps up the major bullet points. I could ramble on and on even more about other random crap, like the guy we knew who found an offload storage unit for American Girl Dolls (tens of thousands of dollars' worth–the bastard) or about the kind of people you meet at these places, or about the owl, but really, that could take all day. And your time is valuable, that's why you're reading about storage lockers on the internet. If you have any more questions…well, then that's a damned shame.

Related
So You Just Realized You Have Commitment Issues
Isabelle Gillman
15 Clickbait Headlines for My Dating Life
Madeleine Aggeler
Mom, I Would Like to Watch the Cartoon Movie about Death Again
Dave Anderson
Resources