Once a month, she turns your relationship into a wild guessing game.

It's that time of the month. It's here and it's ready to smear. Smear the lines between rational thought and irrational terror, smear the dividing line between good and evil, smear whatever previous notion you've had of your own self-standing. It is the 3-day, 4-night (subject to change) timeshare of despair when the beast from Golgotha makes her cyclic return from behind the facade of beauty. It is a time when paradise turns into paranoia, a span when upbeat times transform into vitriol and tyranny; it is a sweltering round on the hot seat like none other if you're her "lucky man." It is The $25,000 Period.

As a concerned member and opposite sex companion, this can be a tough time for a guy when he happens to be cohabiting with someone who—for lack of much, much better phrasing—"sloughs monthly."

She's going to thoroughly question you, and you better have all the right answers (which you most certainly won't). This is the only place in a relationship between a man and a woman where it is possible to be in the doghouse within another doghouse. You don't know what you did, or you don't remember, or you're hoping that she doesn't remember. But in all three instances you're wrong in spite of your ignorance and/or innocence, and you better learn to keep your distance yet remain close to the fire she's internally stoking, or there will be no makeup sex.

At times she can make you feel as if you're the one person who actually understands her, the one person who truly makes her happy, the guiding hand that makes life less puzzling. Then in one quick and steep downward gradient of hormonal levels, she can make you believe that you are her annoying accomplice at the precipice of hell—a feeling strangely akin to having all eyes on you, burning into your soul, damning you for what you did and didn't do; a truly complex situation that may break you, and may make you want to careen off of an interstate highway. 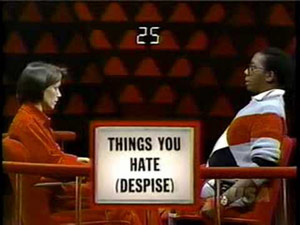 Don't say anything that could be construed as feminine, liked by females, or relating to a past relationship and you'll be JUST FINE. Like the SNL skit where Chris Farley was mistakenly cast into a Japanese trivia challenge, you are now tasked with solving problems that are both not understandable and delicately contrived. You must start at the beginning of the period with the biggest of dilemmas, somehow work your way up and through to the pinnacle of the issues at hand, uncover the deepest, most honest catalyst behind this ordeal, and then somehow hold steady at this dangerous peak over the course of the next few days.

An intellectual/irrational battle that can seem like a mental crucible, The $25,000 Period is not for the wary in a relationship. It is not for those who take too many things personally, or for those who conjure paranoia from the slightest of shuns. It is a setting not suited for those with a frail occupation of intestinal fortitude, or an unwillingness to make a midnight run to CVS for tampons.

The biggest and most tasking constituent of this mental crucible will be the interrogation. This is acute at the onset of the period and does not cease until the storm passes. She's going to thoroughly question you, and you better have all the right answers (which you most certainly won't). Having all the right moves this time around is not going to be enough either, because she will not be appealing to any sensual approach. She's going to be on the war path and she's going to unleash some wrath. Sadly, there is no way to prepare. This is ultimately a balance of karma, a regression to the mean that aligns the peaks with the valleys. An experience even worse than living with a pair of Kardashians.

This is The $25,000 Period, a realm where not too much makes sense. There is no cash prize, and no choice regarding participation. There may be a little pride at stake, but the game mostly involves survival hanging in the balance. You'll feel simultaneously well-equipped and absolutely unequipped with each subsequent monthly episode. Your confidence in what you believe will sway, and she's always right until you're wrong to agree with her. Murphy's Law is in full effect.

You have to understand that even though for 90% of the calendar page she can be an angel, she will make you completely abandon this idealization over the remaining 10%. During that one-tenth time span, she could very well be the root of all rage. She doesn't want to talk about it, but wants you to hear about it. She will oscillate between hot and cold, and she won't want to be criticized for it. And although the scientific community has thoroughly concluded that this is a chemical issue, she will act as if all of this is your fault.

The day before the squall hits the harbor, she'll make you feel like David Blaine, but as soon as it strikes your "love boat," you'll feel like David Spade. The ups of the relationship will be swiftly balanced by the downs. And no matter how much The $25,000 Period takes a toll on a woman's endocrine system, it tends to serve an even greater detriment to a man's self-worth.

This will just be like any awkward day back in the 80's when The $25,000 Pyramid was popular. Except your term is much longer and you won't be making a withdrawal on your 15 minutes of fame. Instead of having to recall useless trivia, you'll have to respond to nearly useless inquiries. Inquiries such as: "What the fuck is wrong with you?" "Where are you?" "What are you doing?" and "Could you please just leave?" (Please stay).

It'll get so distressing and the nagging may get so incessant that you might just have to resort to replying with numbers. I recommend that you try whole integers such as 9, 14, or perhaps 37. Although arbitrary and usually incorrect, answering with numbers will get you just as far as making any intelligent attempt to respond to her chemically imbalanced inquisitions. It's truly sad to say that the answer to one question usually isn't an answer to another, and that the answer to a given question at 1 in the afternoon is not the same answer to the same question just a few hours later.

But it's the trial you must go through if you're in a committed and communal living situation. And if you want to stay committed, then there really is no escape. After all this is more than likely karma coming after you in the most passive-aggressive of ways, and perhaps the only question you really have the ability to answer (no matter how hypothetical) is, "Would you rather pay her a sum of $25,000 so that you could escape these turbulent times, or ride out this storm and eventually put that money towards an engagement ring?"