Why the Pope Really Resigned

When it comes to continuing to be Pope, Joseph Ratzinger says, "Nope."

I'm sure you have all heard by now that Pope Benedict XVI resigned, because he's just too old and tired to be the Pope anymore. Wait, what the fuck?! Of course he's old, he's the freakin' Pope! The Pope is supposed to be old! When was the last time you saw a Pope who wasn't old?! Does he really expect us all to believe that he's just tired? No, I'm sorry, like most things surrounding religion, I can't help but think this is just more complete and total bullshit fed to the masses, who will believe anything without putting an ounce of rational thought towards it.

Look, I'm not saying the Pope isn't old—he obviously is—but come on, that's part of the gig of being Pope. His job is to be a crusty, old, backwards-thinking, religious icon who spouts bigoted hatred shrouded (rather transparently I might add) in a message of basic morality and goodness. The Pope is supposed to wear funny hats and bathrobes while muttering incoherently to people who spend half the time trying to decipher his cryptic message and the other half uttering, "Oh God, did he really just say that?!"

Basically, the Pope's entire job is to provide people with the exact same awkward feeling they get when they visit their grandmother and she utters the "N" word while telling you a story about cupcakes. Now imagine if your grandma just announced one day that she decided to stop being your grandmother, because she was just too old and tired? I mean, then who would send you a card to on your birthday with a dollar taped to the inside next to a scribbled message that looks like she had an epileptic seizure while writing it?! All I'm saying is there are a couple of gigs that you can't just up and quit without people raising an eyebrow, and the papacy is definitely one of them. 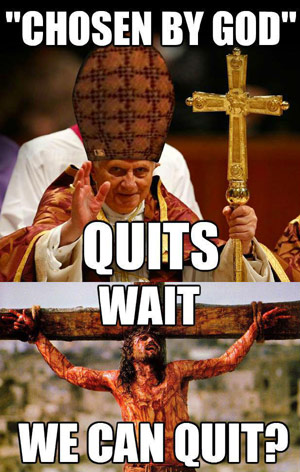 You gave up the papacy for Lent?!

So what's really going on here? Well if you listen to Pope Benedict XVI (aka Joseph Aloisius Imanazi Ratzinger) he says, "Strength of mind and body are necessary, strength which in the last few months has deteriorated in me to the extent that I have had to recognize my incapacity to adequately fulfill the ministry entrusted to me." Nope, I'm not buying it. That smells of complete horseshit. The fact that it's been 600 years since the last Pope quit and every Pope since then has died in office should probably tell you something. But nevermind that, let's instead turn to where all good Catholics turn when they are looking for answers: the Bible.

"I can do all this through him who gives me strength."– Philippians 4:13

Oh…um…er…well this is awkward. Anyway, moving on…

Could it be that Joseph Ratzinger really just wanted to be an Ex-Benedict, because that is as close to a nice English muffin as this guy is ever going to get? No, of course not, that's just silly, because as we all know, he very likely prefers little boys. Okay, if you want to actually get anal regarding little boys, he technically just protects those who rape little boys. I think we can all agree that is a clear morality and goodness loophole which doesn't make him responsible in any way. I mean, it isn't like he's the leader of the entire Catholic Church or anything. The Pope probably doesn't have the power to actually do anything about priests raping little altar boys, especially since those sexual abuse investigations/reparations are so expensive, and we all know how little money the Catholic Church has. Surely the covering up of the sexual abuse of children can't be the reason that Pope Benedict XVI would quit a job where he was supposed to be the leader of morality and goodness…. No, he's probably just tired, like he said. 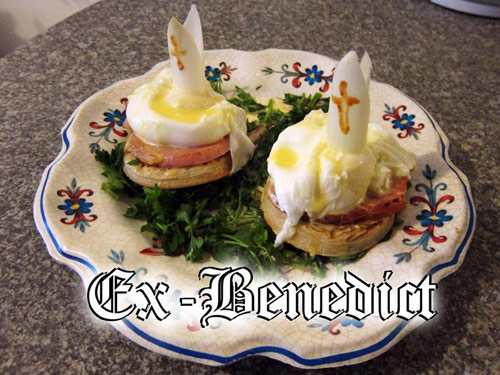 A part of me isn't surprised in the least that the first Pope to have a Twitter account is giving up on humanity. However I am surprised to hear him cite his age as the reason he quit. If I were a betting man, my money would be on what the Catholic Church specializes in: GUILT. Catholic leaders have this twisted relationship with guilt—not quite as twisted of a relationship as they have with altar boys, but still twisted all the same. If there's something they feel guilty about, then they will make a point of beating themselves up about it until the end of time. With regard to the cover up of sexual abuse within the Catholic Church, Joseph Ratzinger certainly has a lot of guilt. So much for papal infallibility, eh? Oh and not for nothing, but I think it is awfully telling and highly convenient that he is planning to live out the remainder of his days in the Vatican, where he not only has security, but more importantly legal immunity under the Lateran Pacts. 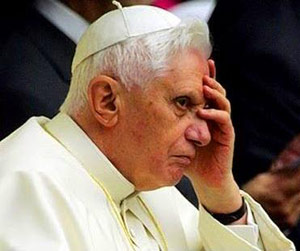 Oh God, they found out I have immunity if I stay in the Vatican.

I guess when it comes to the Pope, everyone is supposed to treat him just like you would treat Grandma: simply look the other way. I mean, you wouldn't dare ask her for more than she's willing to give you, rather, just graciously accept whatever was already given to you. Oh yeah, and not say anything when she drops the N bomb. On the other hand, Grandma never helped people fuck little boys and she sure as hell didn't know the meaning of the word "quit."

Fuck you, Pope Benedict XVI, I pray you get struck by lightning and rot in hell.