We need to talk… I had a great time last weekend and I think you are a great, ergh, date. I know things moved a little fast, probably because you were buying me all those Jager shots. I just want to say before I go any further that I like you as a… in a… hole.

HowEVERrrr… I am currently pissing orange. I thought things might clear up in a day or two but it looked like Tang in the toilet this morning. I'm not going to that rave with you this weekend unless you can explain. 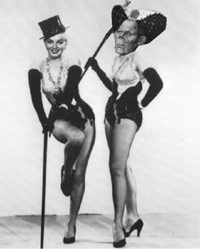 Fugly apologizes for the orange urine, but in the heat of the moment, Fugly slipped a baby carrot into your pee hole. Fugly couldn't resist, your he-hole was just so cavernous and inviting. Try and squeeze it out as if you were passing a gall stone. If that doesn't work, Fugly will hop aboard her llama, come over, and retrieve the carrot with a pair of barbeque tongs. Please don't be angry. Fugly would be simply devastated if you missed out on next weekend's rave! Fugly is so excited that she bought a Shrek costume and several hundred glow sticks at Halloween Land. Fugs can't wait to gyrate to fat beats with you! Pick you up at 7?

The other night I was at Barney's Beanery where I met Kathy Lee and Frank Gifford's son, Cody Gifford. The celebu-spawn wedged his digits into the back of my control top panty hoes. At first I didn't notice—I just thought it was the crinkling of my trusty Depends. The devil inside me says, "Let this little bastard impregnate you so you can siphon cash from his obnoxious celebrity dynasty." But the other, pure side says, "Leave the little nugget alone, he's only 18, and he's got several seasons of Celebrity Rehab in his future." Fugly, the bank is about to foreclose on my house, should I receive his celebu-seed?

Fugly's advice column covers her apothecary bills and affords her new shocks on the stagecoach every now and again, but Fugly would never make ends meet if she hadn't been impregnated by one Ms. Ann Coulter in 1981. Back then it was Alan Coulter and he was tapping his foot in the men's room at a Bakersfield truck stop. Fugly had just polished off a delicious bag of Cheetos, and went trolling for weenus in the restroom. It was there that Fugly stumbled across Alan, who didn't just have the face of a horse, if you catch Fugly's drift. Fugly offered Alan a Cheeto and 60 seconds of pure bliss. Ten months later, Alan Jr. came galloping out of Fugly's womb. These days, "Ann" pays Fugly a hefty ransom to keep her she-male past and our equine love child a secret. Fugly's best advice would be: take the seed!

I was watching Jennifer Aniston present at the Academy Awards and they cut to that witch, Angelina Jolie, not once, but twice! Fugly, it made me so uncomfortable. Poor Jennifer has just turned 40, plus she's dating that jumbo douche, John Mayer. He's the worst. I have recently been left for a younger snatch. Fugly, how do you cope with "the other woman"?

Fugly has been left for many other women, men, slow-moving sea otters, and even a Dyson vacuum cleaner with a picture of Jessica Rabbit taped to the hose. Fugly believes that looking good is always the best revenge, which as you can see, Fugly does quite well. When Fugly's sexiness fail to crush the evil bitch, Fugly likes to call the police and say that the other woman has been brutally raping neighborhood Weebalos when they're innocently trying to retrieve old Christmas trees off of the street. Mmmmm, Weebalos. Fugly needs some alone time now.

Related
You Should Quit Social Media Because You Are Being Pursued by a Hideous Creature of Your Own Making
Janay Lovering
Mom, Dad, I Think I Might Be Disney’s First Gay Character
Audrey Clark
I Apologize for the Clown That Was Juggling at Your Grandfather’s Funeral
Kurt Zemaitaitis
Resources