Republican heavyweights attempt to take over the White House through sheer lyrical force.

Journalist #1: Mr. President, is it true that you have repeatedly backed down from the Republican's challenge to a rap battle in order to determine the fate of America?

Yo, it's Bachman Overdrive and I'm all up in your shit! Spit in your face and punch you right in the dick!Obama: Okay, I'm getting a little tired of these questions. First off, it's just ignorant. We as a nation cannot expect to solve our problems that way. There are channels of legislation that must be passed through, votes to be taken…what you're suggesting is both ridiculous and insulting.

Journalist #1: So you don't think that the revenue from a pay-per-view rap battle on Capitol Hill could save the economy?

Obama: Of course not. Next question.

Journalist #2: Would you be willing to step down as president if the Republicans won the rap battle?

Obama: For the last time, there is not going to be any rap battle. So can we please just— 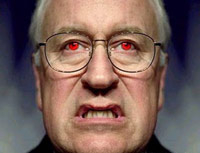 You know what they say about an angry Dick… you get fucked every time!!Dick Cheney (taking a flying leap to the stage): My name is Cheney! And I'm insane, see? I'll shoot you right in the face, cuz no one blames me!

Dick Cheney: You can't handle the action, so step back, son! I'll take you out in the woods, show you my shotgun!

Obama: This is the most blatantly racist thing that I have ever—

John McCain: My name's McCain, I bring the pain, with the mad pimp game! Sarah Palin? That bitch I'm nailing? She'll suck my cock then grab the Glock and put two in your brain!

Obama: Please, John. You're embarrassing yourself.

John McCain: You may have beat me before, but I'm still coming for you! We got a whole new crew, now your ass is screwed! Yo, Newt! Show these motherfuckers what we can do!

John McCain: We got Huntsman!

John McCain: We got Mitt!

John McCain: We got Ron, Tim, and Rick, a black dude and a chick, you can't fuck with us, sucka, cuz our rhymes are sick!

Michelle Bachman: Yo, it's Bachman Overdrive and I'm all up in your shit! Spit in your face and punch you right in the dick! You want change? You need some strange, your wife is a bitch! Come back to my place, you know that I can scratch on that itch. Then I'll break out my camera, and fucking laugh at your prick!

Obama: Okay, that does it. (presses button to turn on giant spotlight with Wu-Tang Clan insignia aimed at the sky)

Method Man: Which one a' y'all sorry asses wants a rap battle?

Republicans back down and fall silent. 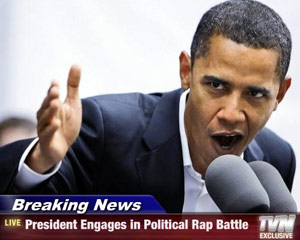 Dick Cheney: This isn't over, Obama! Wu-Tang won't always be around to save you! We'll be back!

Cheney and crew exit in a cloud of black smoke.