The term dork actually means whale penis, and though I do have a whale penis, I don't consider myself to be dork.

But that doesn't stop me from being a dork sympathizer, and yes, a comic book fan.

At this late date though, it's hard to imagine anyone questioning the validity of comic books as one of the greatest American art forms. I mean nowadays people will even go to see movies about Iron Man.

I know all about Archie Comics' code of decency. Much like Barbie and Ken, they have no genitals.Sadly however, many of the comic books you read (instead of paying 10 dollars to watch while eating fossilized Sour Patch Kids) still haven't exactly broken the gender gap. Sure you could talk to your girlfriend about Heath Ledger's haunting performance as the Joker in The Dark Knight (I personally couldn't, because even though he was amazing in 10 Things I Hate About You, I try to avoid comic book movies–usually I just end up getting pissed off at how blasphemously inaccurate they are to the source material), but I would sit there stewing like I did during Spider Man 3, thinking stuff like, "Why did they wait to put Gwen Stacey in the third movie, and have her not die, and have her be ugly?" or "Did they really think Eric Foreman from That 70's Show would be a good choice for Venom!?" and "Why is he making raptor noises!?"

But actual comic books that you read still are not accepted by womenfolk for the most part.

Except of course for the ones that are.

For example, Archie Comics. Not only are they made mostly for girls, but they're also sometimes ABOUT girls. Two very important ones in particular.

Sure they've been around for 600 years, and they've never been any more intentionally funny than one of the shittier episodes of Saved by the Bell, but I'm not even female and I still buy one every time I'm in the checkout aisle. And let me tell you, it's only partially because it amuses me to be purchasing pork rinds, condoms, a twelver, and a Jughead Double Digest all at the same time. 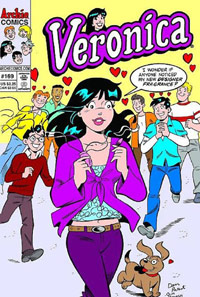 You see, in addition to that, I, like every man worth his salt, must eventually face the ultimate question: Who's it gonna be? Betty Cooper or Veronica Lodge?

No, they aren't real. But they might as well be. After all, they represent an actual conundrum. Who's better? The sassy wealthy raven-haired beauty, or the sweet adorable innocent blonde?

If you were Archie Andrews who would you choose?

Well folks, even though my namesake in the comic "big Moose" is dating Midge, I'm going to provide for you my answer to that age old Betty/Veronica question today. Regular readers know, ever since my tragic 4th of July breakup with Lindsay Lohan, I've been auditioning replacement celebrity girlfriends. And although most Hollywood girls come very close to it, I've never considered dating an ENTIRELY fictional character before (unless you count the sultry video game chick from "Feel the Magic XY/XX"). But there's nothing wrong with keeping your options open.

Kidding aside, I know all about the Archie Comics' code of decency–what I'm discussing here is merely hypothetical, and in no way should reflect negatively upon any of the good wholesome people and citizens of Riverdale. Much like Barbie and Ken, they have no genitals (except oddly, for Mr. Weatherbee).

That being said, hypothetically speaking, if I were Archie, I would have oodles of sex with Veronica and then do the honorable thing: Marry her and live out the rest of my days being catered to by butlers and licking that one imported German cheese spread (the one that has the cool tiger on the package) off of her breasts.

Oh sure, her father would probably find some way to have me killed eventually, but we're all gonna go sometime right?

My take on it is that are there are probably far worse deaths you could suffer that don't even involve German cheese breasts.

I realize this may come off as shallow, but I've at least in part chosen Veronica over Betty because rich girls can provide you with a far more satisfying post-coital ham sandwich than less than rich ones can. (You know there HAS to be some honey baked ham around the Lodge household!) 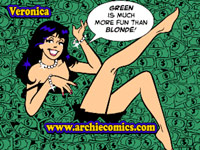 But it's not just the financial security Veronica would provide that attracts me to her over Betty, it's the accessibility factor. Betty's a great gal but she just seems too darn attainable.

I ask you, male and female Mooseheads alike, what is it about the most unreachable objects of our desire that makes us wish we had arms like Mr. Fantastic? (As well as other parts.)

Since she's a bitch and loaded AND fictitious, Veronica may just be the most unattainable girl of all time, and therefore the most desirable.

So, in conclusion, I have a whale penis.