Denounce science and embrace the Bible, or Global Warming will kill you.

As you know, Global Warming was brutally defeated in 2008 by Paul Frank's scathing editorial bombshell entitled "Global Warming Does Not Exist." And while it is completely true and factual to say that his scientific claims are absolutely irrefutable and impossible to logically argue against based on their unbiased and undeniable truthfulness in the face of overwhelming evidence, it is also important to consider God's divine plan according to the Bible. 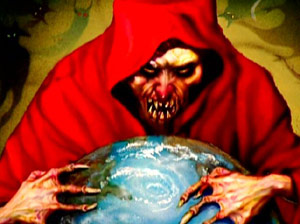 "Is it hot in here, or is it just me?" So where has Global Warming truly gone? It is not dead, but dreaming. It lies in wait to punish the wicked. Global Warming will destroy us all with sunburn and polar ice cap melting unless we repent for our evil ways and gay marriages and government birth control. According to the Bible, "And let not man lie with man, or bringeth another man into thy household to be thy wife in place of woman, for Satan shall punish thy wickedness with his warm wrath, and all shall suffer globally." Not even science can argue with that.

Global Warming is a thirty foot tall demon that causes cancer and abortion. This is Biblical fact.Also in the Bible it says, "Though a man may possess two hands, he can never hold both science and religion at the same time, because science is a fatherless bastard, and as such is jealous of religion, for religion is the true son of God, and therefore need never prove itself because it is the favorite in the eyes of the Lord." In other words, you shouldn't trust science because it always has something to prove. All science ever really wanted was a father's love.

It is because people take pity on science that it has any credibility in the first place. We must ignore science in favor of Biblical truth, or we are doomed to suffer the horrible fate of Global Warming, which is obviously divine judgment to punish the followers of science. Science is wrong, and unloved. Give it not your attention, or it will infect your mind with all manner of crazy ideas.

The Bible clearly states that Global Warming is the product of Satan. Global Warming is a thirty foot tall demon that causes cancer and abortion. This is Biblical fact. Scientists and theologians have known about Global Warming since it was discovered in ancient Egyptian times, lurking in a pyramid and making deserts uncomfortably hot.

Fact: Global Warming caused the flood that destroyed everyone in the world except Noah and his animal companions. None of those animals were involved in same sex marriages. Coincidence? I think not. Global Warming spared them because of their virtuous and sanctimonious heterosexuality.

Fact: Jesus walked on water that was the product of ice cap melting due to Global Warming. Because of his holiness, he could not be affected by its evil touch.

Fact: Global Warming will return unless you repent for your sins. It's not too late. Only you can save the environment from Satan.

Related
How to Get Revenge on Your Roommate Who’s a Protester
Kerreanna DiMauro
The Count of Monte Cristo Would Like to Discuss His Many Interests That Aren’t Revenge
Brianne Gagnon
Kids These Days: Can We Go Back to Non-Murdery Anger and Revenge Techniques?
WC Mason
Due to Concerns over Coronavirus, I’ve Decided to Postpone My Personal Revenge
Eric Farwell
Resources