I have a confession to make: I read children's books. Really, really bad ones. I have an entire book case dedicated to Choose Your Own Adventure, and I've read so many stupid R. L. Stine books that I could ghostwrite Goosebumps in my sleep.

As a rule, children's books are stupid and weird. This is because most children are stupid and weird. And even though some titles in the genre are destined for success, like Harry Potter (over-hyped dork wizard) or The Hunger Games (I liked it better in Japan when it was called Battle Royale), most of them are just plain dumb. And every once in a while you come across something so mind-blowing that it sends the WTF meter into the red.

May I present to you, just in time for the holidays, Frankenturkey.

From Betsy Haynes, critically acclaimed author of a bunch of dumb shit my girlfriend reads, comes this chilling thrill ride masterpiece of absolute crap from the year of our lord, 1994. This is the story of a douchey 6th grader named Kyle and his annoying twat of a sister Annie. They also have a big stupid dog named Trouble, which is supposed to be a clever name, but it isn't. Also, Kyle's mom is a total nutjob.

The fact that headless frozen turkeys have no brains to reanimate was somehow overlooked by the author. Kyle just moved from Florida to a new school in Massachusetts and he doesn't have any friends because he's a complete loser and the other children can sense his awkward desperation to be accepted. There's even a group of boys that Kyle obsessively fantasizes about befriending. It's pretty sad and creepy, and a little gay.

Every morning before school Kyle makes a ritual of getting his ass stomped by Jake, the local bully. At first Jake punches him in the face, but later on Kyle convinces him to only punch him in the stomach so as not to leave visible bruises because black eyes are super embarrassing in 6th grade.

Anyway, so Kyle's an idiot, whatever. Moving on. One day, Kyle and Annie's parents take them to a turkey farm to pick out a bird to raise, feed, and then slaughter with an axe for Thanksgiving while dressed like pilgrims. Kyle's mom has no idea why this would scar her kids for life, because she is a lousy parent.

So of course they get the cutest, shyest, most pitifully puppy-dog-eyed turkey in the pen. So they can kill it. And eat it. Not surprisingly, the kids become attached to the turkey and name it Gobble-de-gook. That's seriously what they named it. Anyway.

They come up with a terrible plan to save Gobble-de-gook from the axe by hiding him in the basement and replacing him with a frozen turkey covered in feathers and wearing a Halloween mask. The frozen turkey is accidentally struck by lightning and suddenly comes to life just like in the story of Frankenstein where something not even remotely similar occurred. The fact that headless frozen turkeys have no brains to reanimate was somehow overlooked by the author. 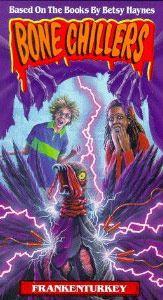 Dust off your VHS player, Thanksgiving just got wings.So of course, the reanimated fake monster turkey is evil and tries to kill everyone except for Kyle's parents who are oblivious to everything. On the upside, it does terrorize the bully as well. Even though Jake acts tough, deep down he's just a pussy who's afraid of a flying undead affront-to-God monster with knives for feet. But don't worry, everything turns out okay. By the end of the book, Frankenturkey is defeated, Kyle and Jake are best friends, and Gobble-de-gook gets to live. Aw. That's sweet.

Now I know some of you are probably thinking, "Wow, this sounds great except for one problem. I don't read because books are stupid and boring. Why couldn't they just make this into a 20-minute TV show for people with no attention span?" Well buddy, you are in luck because HOLY SHIT THIS IS REAL.

In the event that you are under the age of thirty and/or already pawned your VCR for drugs back in 2001, fear not. You can still watch the insanity on YouTube.

Now you'll notice right away that the show takes a few creative liberties with the details of the storyline. Our hero is in his twenties and hangs out with a gang of grungy slackers who look like they were rounded up in the parking lot of a Butthole Surfers concert and paid entirely in sheets of blotter acid. The character of Jake has been replaced with a meathead jock and his prep slut girlfriend and fat guy sidekick. And they all attend school in a surrealist nightmare castle in the middle of a goddamn graveyard with a fucking demon for a principal. Throw in some psychedelic video editing and turkey puppets and you end up with something that looks a lot like a GWAR video. Ah, the 90's. Good times.