I was okay with Zima and Smirnoff Ice—girls and weenies need something to drink too. Grape-flavored vodka rubbed me the wrong way, but I accepted it as I've accepted vodka-infused sweet tea. I just grunted when my friends offered me raspberry beer—even though I adore raspberries. But now…now I'm getting angry. Jim Beam has released its "Red Stag" line—Bourbon with a hint of black cherry taste. 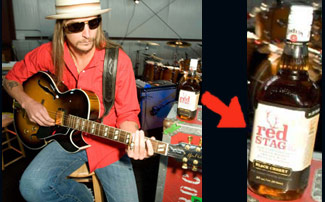 Red Stag is to Jim Beam, as Kid Rock is to rock music.

I gave a pass to Wild Turkey for making a honey liqueur thing. But I've never met anybody who's ever drunk it. But now I'm seeing this weak-ass Jim Beam crap everywhere.

Here's the deal you fucking Nancy boys. It's whiskey. It shouldn't taste like fruit. It should taste like pain. That shiver you feel after taking a shot of Maker's Mark? That's the precursor to a death rattle. If you don't like it, check out the Boone's Farm section of your liquor store and keep being a fucking loser.

You feel that burn? That's what your fucking forefathers drank. The pioneers didn't ask for a way to make things easier.Flavored whiskey is just as awful as Christian heavy metal. Each is fine on its own, but don't mix them together. Although, I would be interested in what Jesus Bourbon tastes like, but I digress.

Our fucking culture is so messed up. It's all about covering up the reality of things. You don't like the taste of whiskey, but you want to seem cool, so you add berries to it. You enjoy meat, but don't like the fact that an animal must die, so you demand your food is cage- and cruelty-free. Guess what, dipshit? The cow still fucking dies. There's no way around it.

This is the same shit I saw a few fashion weeks ago when people started putting on fake tattoos. Honestly, I could give a shit about fake tattoos, but if you think they pass as real tattoos, they don't. When a highly-trained pain enthusiast sticks a modified drill bit into my skin, do I ask if he could "maybe make the tattoo hurt a little less"? Do I pop a few painkillers to deal with the ouchies? Fuck no. I grin as he digs the needle in as deep as it needs to go. There's no way to make it something else. But the end result is that I earn something real, not some bullshit.

I guess I could say the same thing about fake tits, but I won't—because all boobs are awesome.

Having a tattoo, drinking whiskey, and eating a blood-dripping hamburger are about making choices. If you can't decide, then don't do it.

So here's my challenge to the drinkers of the world. Next time you feel like ordering some weenie drink, order a real whiskey, vodka, gin, tequila, or rum straight up. Taste it. You feel that burn? That's what your fucking forefathers drank. The pioneers didn't ask for a way to make things easier, they just tightened the buckles on their shoes, rolled up the sleeves of their togas, and put on their sombreros for another shitty day of work.

How does your unadulterated whiskey taste? Yes, it's harsh. Yes, it's painful. No, it's not all peaches and cream and fun and games. Neither is life. Parts of it are supposed to fucking suck. Deal with it.

Quit lying to yourselves and to others that if you just sweeten something, maybe it won't hurt as much. Learn to enjoy the harsh realities of this world. If you keep avoiding the blood, guts and tears, you'll never know what's really going on. Stop asking people to sugarcoat things for you so you'll feel better. Suck it up and do something real for a change. Plus, too much sugar will give you diabetes—I don't know where that fits in, but my mom told me that.

Like one of my old biker friends says, "If you can't handle the pain, move to Washington D.C. and complain about it enough. Maybe they'll make a law for you."