Way the hell back a long time ago, a lot of people never even thought about having sex with their video game systems (and by "a lot of people" I most certainly don't mean me. Just ask my strangely moist Atari 2600). But now it's the 21st century, and even though we don't have flying cars, or in my case, a car that doesn't explode when you turn it on, we do have Rub Rabbits. And because of that, I think interactive gaming technology may eventually get to the point where we will have intimate adult relations with girls that are not entirely human. 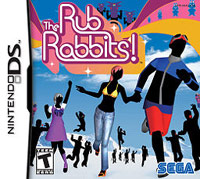 And yes, I know some of us are already doing that.

What is a Rub Rabbit? Fuck! I don't know! But I have this one game for my Nintendo DS hand held system called "Feel the Magic XY/XX" that leads me to believe they are insane men with bunny ears who go around encouraging a skater dude to risk his life performing incredibly dangerous stunts to win the hand of his lady love.

You use your handy dandy stylus to actually rub the screen to complete tasks to impress the lady in question. There are also hot sexy mini games where you have to apply lotion to her back shoulders and hold her hand as you walk through the park, the ultimate goal, of course, to cause her to giggle and blush, whilst the Rub Rabbits all stand around egging you on and probably filming you.

Or at least it's had that affect on me on many a lonely Lohan-less night.

As far as my new potential celeb girlfriend Vanessa Hudgens goes, well lately she's been pretty tied up with making back-to-school commercials where three different versions of herself argue about which outfit they're going to wear…and yes, if it were possible THAT would be a "-some" that I would want me some of.

Unfortunately, a machine that makes more Vanessa Ann Hudgenses may only come to pass in the far flung future. Something much more feasible however is the concept for my own officially licensed romantic rub-tastic video game for the Nintendo DS: "Feel Nick Moose!"  (I promise that's only the working title.)

Friends, correct me if I'm wrong, but I'm pretty confident this is the first vagina-based video game I've ever come up with and wrote a column about for Points in Case–and that makes it something of an innovation.

I figure if I get this project going, then during any of the incredibly rare dry spells in my actual sex life, at least myself and my fans can enjoy a simulacrum video game version of me getting his freak on.

Also that way I won't be the only one playing with me.

Now mind you, I still have to pitch this game to the Rub Rabbits, and I hear they're a fickle bunch, but if I sell them on it, here's what some of the stages might end up like.

LEVEL 1: Oh no! I have to write a column but there's a damp cheerleader splayed out on my laptop! Use the penis-shaped stylus to bring her to screaming orgasm so she'll move and I can send my weekly wad of awesome to Court Sullivan before the deadline!

LEVEL 2:  The Attractive Distractions just fished a show and both of our groupies are restless! Help me pleasure them before they become disinterested in us and try to hook up with the Jonas Bothers instead!

LEVEL 3: One of my girlfriends is trying to make love to me but "Johnny Socko and his Flying Robot" is on and there's beer!  Help me overcome my ADD so I can satiate her!

LEVELS 4-52: Somehow a mad scientist has created a machine that actually did clone Vanessa Hudgens! 24 times! Boink all of her twice!

Hopefully my notoriety as an up-and-coming PIC celeb with more than 14 semi-regular readers is enough to warrant those rabbit-eared rubsters to drop a god-zillion dollars on developing a video game about my penis. If not, at least I personally will always be able to feel Nick Moose.

Related
I’m a Movie Villain and Here Are 40 Reasons We’re Not So Different, You and I
Lillie Franks
What to Say in Rude Christmas Cards
Jacob Knowles
Professional Dating Services Reviews on DatingServiceUSA: Find Your Path to Happiness
Olena Medynska
Resources