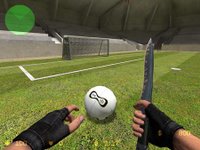 Atlanta is a pretty diverse city. We've got young people just starting out, suburban families buying up the latest SUV, people not having any sex at all (ahemgeorgiatechahhem), day laborers hanging outside of Home Depot looking to paint a house, and college students making sure no bar in the city goes out of business.

But nowhere have I seen this diversity come together like the soccer field. It is, after all, the most popular international sport, but it wasn't until recently, when our biggest in-town park (Piedmont Park) opened up a gigantic field space, including room for two soccer fields, that every type of aforementioned person (with an ounce of stamina and two good legs) finally came together for daily pickup games.

Growing up I played mostly soccer and tennis. Eventually I sorta had to “choose” which one to “go for” and my dad's best advice was, “Well, it's a lot easier to grab one other person and find a tennis court for the rest of your life than it is to get 21 other people together for a soccer game.” Who would've known I'd live around the corner from a place where sometimes these people refuse to divide up a game with 30 players into two smaller games. You end up touching the ball about as much as you do in baseball.

1. Columbian kids under 16 won't let you and your friends play against them unless you put up $20 a head on the outcome. Somehow I feel like I'd have better odds picking individual numbers at a roulette table.

2. Just because some guy is wearing khaki shorts and tennis shoes, doesn't mean he won't dribble circles around you and never break a sweat.

3. Any Spanish-speaking kid over the age of 9 on the field WILL make you look like an idiot on the field at some point. Resist the urge to pick a fight; his dad or brother is probably nearby.

4. No matter where you're from, the correct terminology is, “GOOOOOOOOOOAAAAALLL!!!” Seriously, don't try to start a new trend. Besides, “nothing but net” sounds really weird when it's just two cones.

5. Do not wear cleats. As the signs clearly state around the field, cleats are not allowed, assumingly to preserve the pristine state of the newly-sodded grass.

6. Don't leave home without your knife! That way, if somebody talks too much shit on the field or tries to start a fight with you, you can pull that blade out and slash his ass!!

7. Seriously, DON'T WEAR CLEATS. It's not cool. Do you see anyone else here wearing them? No. I mean, what if you stepped on somebody's toe? Just bring your knife, it's sharper and easier to wield maliciously should you feel the need to let off some steam.

8. If a fight breaks out, do not try to intervene. You'll just get punched; perhaps by one of the two who are fighting, or perhaps by somebody random who enjoys a good fight. Unfortunately, I learned this the hard way. What I had forgotten is that people have knives to sort this kinda shit out. Forget drop balls and penalty kicks, just wait for one guy to slash the other guy's entire upper arm open. Then watch as 40 people look on unsympathetically and no one calls the police even though he's pouring blood and chasing the guy with the knife (risking death I assume) because “dude, that guy's been annoying everyone for weeks… he deserved it.” COOL! Like the wild, wild West! …Alright, umm, I'm worn out, see you guys tomorrow, same place?

Wait, what's the rule on guns?