Why You're Never Actually Going to Go to the Gym Tomorrow

Four obvious reasons you always break your promise to go to the gym.

A study that came out in 2006 shows that aerobic exercise increases brain volume in aging humans. A separate study from 2009 reports that standard aerobic exercise is just as effective as anti-depressant medication in treating patients with clinical major depression. From these studies, I have concluded that exercise is good for you. Believe it or not, I actually came up with that hypothesis years ago. So, in strides to be healthy, I decided I should start going to the gym.

It's really hard to focus on your form when the woman next to you sounds like she's giving birth to a full-grown toddler. I think there are four main reasons why I can't seem to find any consistency in my gym habits, and I'm pretty sure they're holding most of you back too.

Maybe it's my generation's need to always be entertained, or maybe lifting a heavy metal bar up and down just isn't my idea of fun. Whatever it is, I get so incredibly bored at the gym I just want to leave. Running on a treadmill, for instance, turns into a multi-dimensional feedback loop based on the inverse of the scientific principle "time flies when you're having fun." As boredom increases, time goes by at a decreasing rate, feeding back into and further fueling the increasing boredom. This leads to an increasing incidence of looking at how many miles you've run in hopes of the end being near, which further adds to time going by slowly, as dictated by the "watching paint dry" principle. Suddenly, what is actually a 15-minute run turns into what seems like an eternity. 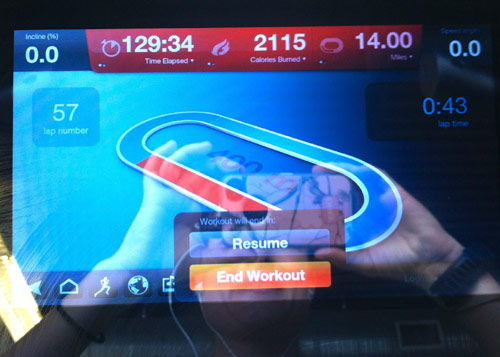 DEAR GOD WHAT DOES IT ALL MEAN?? WHEN DOES IT END?!

The feeling that briefly yet authoritatively pulses through my body after my fourth of four sets of leg presses is a pain unlike most others. Some people claim to like it, and to that I say you're weird, because we're not supposed to like pain. Why do you think pain exists? It's our brain telling us to cut it out. If you choose to ignore that, you're ignoring evolutionary instinct and that to me just seems foolish.

And it doesn't end there. Some say a good workout is most often followed by a day of being sore. A workout buff (pun intended) would say it's a great feeling, a feeling indicating a successful workout. To that I again say, you're weird, based on the same aforementioned principle.

3. It's easy to get distracted amidst the hilarious things happening around you.

It's really hard to focus on your form when the woman next to you sounds like she's giving birth to a full-grown toddler. When I hear a grunt, moan, snort, unnecessarily long and drawn-out exhale, etc. from someone nearby I lose all focus. If it's a really ridiculous noise I even start to laugh, which I immediately turn into the half-smile teeth clench face you make when you're lifting heavy things.

I'm also particularly amused by the personalities I find at gyms, most comical, obviously, being the beefcakes, or as I affectionately call them, the upside down triangles. If their tiny lower halves and gigantic upper halves aren't funny enough, it's their sauntering around the place like hormonal gorillas, splaying their varicose upper arms outwards in a behavior I can only attribute to territorial scent marking that really takes the proverbial beefcake. If you don't believe in evolution, you will after seeing one of these ape-human intermediates at your local gym.

Then there are the fashionable ones, most often females (sorry ladies, but the beefcakes are more interested in showing you their entire rib cage by tearing the arm holes of a sleeveless shirt down to the hem) who insist on showing up in $200 worth of workout clothes, a full array of makeup, and more perfume than a pheromone festival groupie. You'll always know these types at the gym, because the only thing that is more obvious than the contour of their buttocks through their fancy gym tights is the two men running on the two treadmills directly alongside hers in a room of empty ones. I guess I don't blame them, she smells good. 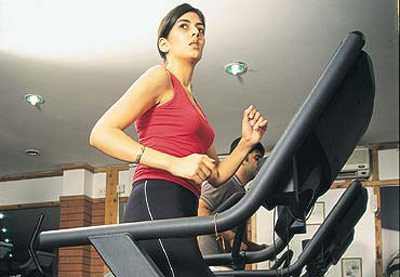 Well, they did say it's always safer to run in groups.

4. It's often hard to tell whose sweat you're wearing when you're done.

I suppose this one is more personal, as I am a bit of a germaphobe at times, but sometimes I seem to leave the gym dripping more of other peoples' sweat than my own. Really, who doesn't care if they lay on a bench or mat drenched in someone else's bodily fluids? (Except for the beefcakes—scent-acquiring has been observed in chimpanzees who roll around in rival males' markings.) We all know no one really wipes down the equipment when they're done. The gym offers it as a formality, but they know it won't happen. What's hygiene when you're compromising your immune system by stressing every muscle in your body to the point of dystrophy for two hours, anyway?

I try to get exercise by doing fun things, like playing sports, and I still have a six-pack. Fun-filled exercise makes me feel OK about drinking six beers after I'm done. If you happen to be one of those people who enjoys working out at the gym, more power to you. Just beware of #4, continue ignoring #2, don't get caught in the trap of #1, and you're probably the subject of #3.

Related
Five Made-Up Indie Bands You’ll Never Hear This Year
Mark Hutchins
How to Write About Your Anxiety Instead of Actually Dealing with It
Daniel Kozuh
Eight Reasons Why 2019 is Going to Be a Big Year for My Hometown’s Minor League Baseball Team, The Woodborough Egg Boys
Ryan Ciecwisz
When Am I Ever Going to Use This in the Real World, 2021 Edition
Adam Dietz
Resources