Football is one of the greatest examples of everything right and wrong with America. Fuck your sports, we have our own and soccer is stupid (and yes, we will call it soccer). And we hate the metric system; the horribly designed system we have in place is perfectly fine "But it's easier to convert using the metric system!" Stop bringing more math into the equation. It makes our heads hurt. We're ranked low in math. How low? I couldn't tell you, because I don't have that many fingers.

What was I talking about? Oh right, football.

For 15 years the NFL used the same strategies Big Tobacco used to cast doubt on links to concussions. And these are the people we're siding with?As much as I love getting drunk and watching grown men beat the living hell out of each other (or children, when my friends force me to go to their children's games), recent reports of the concussion issues in the NFL have put a damper on things. While at first I was a little resistant to any sort of rule changes, the more I learned, the more I realized how truly dangerous the sport had become, and how terrible it was that 40% of fans were irate about the new rule changes.

So here are a few pointers that I hope will convince you that these changes need to happen, no matter what.

1. The odds of mental health problems in players are absolutely staggering.

The first argument people always bring up when debating the issue is, "Players knew football was a tough sport when they signed up! It was their decision!" True, but the main thing people fail to realize about this argument is the sheer matter of scale. 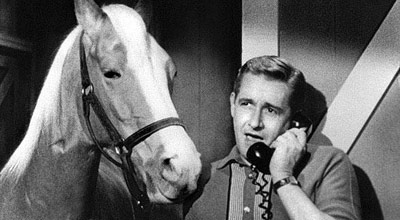 "One cream or two, Wilbur?"

Some light study in epidemiology (pause to figure out what the hell that is) could shed some light on the situation. An NFL-funded study at the University of Michigan found that retired NFL players were 19 times as fucking likely to experience dementia, Alzheimer's, or other memory-related disease before they were 50. "But," you say, "that's still only 1.9% of retirees. Is that really that big of a deal?"

Well, let's stack it up to the big boys. The gold standards of ensuring death by totally preventable causes:

And those are the heavy hitters. I could name plenty more examples of things that are well known risk factors for diseases that hang out around the 2-5x ratio area. And the effect absolutely ruins your life. I'm not talking about stiff joints or needing a cane, I'm talking about not being able to walk or talk right, higher rates of serious depression, volatile bursts of anger, vision trouble, and premature death. 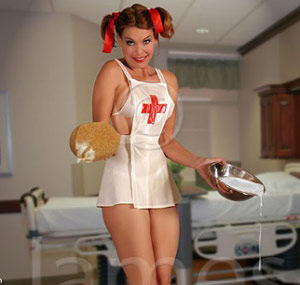 And good luck getting a hot sponge bath nurse on an HMO.

2. The NFL has known about that football head injuries are linked to brain damage since 1994 (and has hidden it most of that time).

Okay, sure, those numbers are insane, but the fact of the matter is, the NFL can't give you a statistical breakdown of everything that could possibly go wrong in a career as a professional athlete. It's not like they knew how dangerous the sport could be, then lied or otherwise covered up the potential hazards.

In 1994, the CDC reviewed mortality and said that there was a higher (though not yet conclusive) risk for Lou Gehrig's disease among players, and suggested a long-term study to see if the trend held. Fair enough. Remember that Doll smoking study? It took them around three years to be confident enough to publish their early findings. And to their credit, an NFL spokesman finally admitted there was a likely long-term effect…in December 2009.

They did quickly establish a committee called the Mild Traumatic Brain Injury (MTBI) committee (because all real investigative committees make a prediction about the severity of the disease before they even study it) to investigate the link. They put a rheumatologist in charge instead of a neurologist, since everyone knows concussions have more to do with joints than they do your brain. This ragtag committee did all sorts of great research since 1994.

Here's a short list of their groundbreaking research that would even make tobacco industry scientists proud:

Oh yeah, and that guy they put in charge of the MTBI committee also made his paychecks working for the New York Jets. In 2003 (9 years after the committee formed, for those keeping score at home) he sent a wide receiver back into the game after being knocked unconscious. But it was a high stakes game! The Jets were 2-5 and looking to cruise into the playoffs. And how could they possibly win the game without Wayne Chrebet, their fifth-best pass catcher in terms of yards?! How could the offense function without the 289 yards he posted that season? I mean, sure, it's around 350 yards less than fullback Curtis Conway, but he had 27 more receiving yards than running back Curtis Martin (since he started playing before the forward pass, he didn't have great hands). 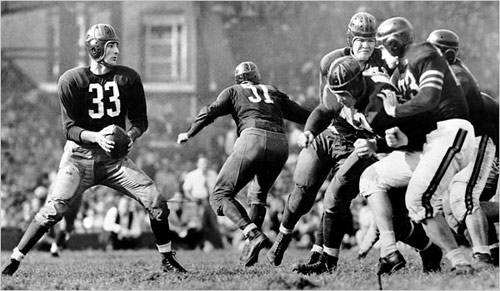 On second thought, he probably wasn't playing then, but he's still really old.

Seriously, for 15 years the NFL used the exact same strategies Big Tobacco used to cast doubt on whether or not there was causation. And these are the people we're siding with?

3. The only reason some people aren't defending players is because they don't want to ruin the entertainment value.

Hitting is a part of football, no doubt. As of this article, searching for "football greatest hits" on YouTube brings up 20 videos dedicated to nothing but hard hits with more than a million views. That's why we love it: it's gladiatorial and raw. And that's why this whole fiasco is so disheartening to fans. The new player safety rules have taken so much of the edge out of the game, and it changes the outcome of games.

I was inspired to write this article after a sack-fumble on Drew Brees was overturned due to an illegal hit penalty late in the fourth. The Saints drove downfield, tied the game, and ended up winning. If they hadn't gotten that penalty, they probably wouldn't have seen the ball again until the two minute warning, and the 49ers could have put the game out of reach with another score. But what made it especially infuriating was the fact that it's pretty obvious the defender wasn't being malicious. Drew Brees is one of the shortest quarterbacks in the league. Hell, Ahmad Brooks may have done him a favor by stretching his neck out an inch or two. 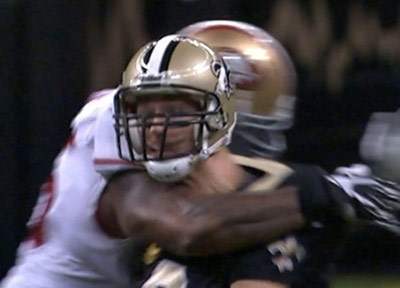 Thanks Ahmad, but I think I'm going to try the neck rings again.

The safety rules have also changed the strategy of the game, not just the nature of it. The shotgun was first used in the 1930's, but wasn't widely adopted until the 90's. Why, you ask? Mainly because of the emphasis on safety. Seriously, how many quarterbacks would a team go through if Brian Urlacher and Ray Lewis were allowed to hit late, horse collar, spear, and make helmet to helmet contact with quarterbacks constantly? Tom Brady would have had more career compound fractures than touchdowns. How many catches are made just because the safety is too scared to come in and make a hard hit to jar the ball loose?

But even though I'm ready to admit every one of those things, the integrity of the game is still not worth it. Because that is literally the only argument against these new rules that holds a grain of salt. In other words, the ONLY good reason anyone has come up with to not make the game safer is "it's not as fun anymore." Are you really willing to make that tradeoff? Memory loss, aggression, and symptoms similar to Parkinson's just so you have something to watch on Sundays for a few months out of the year? If this issue dealt with coal miners instead of athletes, would you not be absolutely outraged?

4. The CHILDREN!!! High school concussions are even worse and the NFL must set a good precedent.

For anyone else who played football at any level, this next statement won't come as a surprise: high school football associations protect players way less than the pros do. In fact, the average high school player is twice as likely to suffer concussions than a college player. One of my good friends from high school was a two-way starter and played all of the special teams. This is totally out of my ass, but I'm guessing he got at least one concussion a year and he played for four years. His go-to tackle was the spear. He never got flagged once. One time, he and another kid had a head-to-head collision. He could barely walk straight when he got up. He wouldn't respond to anything we said to him, so I called a timeout. At the top of his lungs, the coach asked him where he was and he replied "7:30." He came back in two plays later, and played every single remaining snap.

How about something with actual evidence, like the Phoenix senior who recently died after suffering a severe brain injury after a tackle? Sorry to end this on a bummer, but guess what? The whole situation is a bummer. My friend who I was telling you about? Everyone on the team thought it was the funniest thing they'd seen all year. It made peoples' favorite senior memories. If he had asked to stay out of the game, we all would have probably called him something that rhymes with what you do on fourth and 20 from your own 10-yard line (two points if you yell it out loud!).

And that's what makes this so incredibly scary to me. It's not the fact that it's so dangerous, or even that the NFL tried to cover it up, it's the culture around it. Concussions were something we laughed about. They made NFL blooper reels. It was a part of the game like passing, blocking, and club shootings. And until recently, it was met with a defensive stance and anger directed the wrong way. Last year, 40% of football fans said nothing needed to be done, which is actually kind of refreshing. I assumed it would be the other way around, if anything. But 40% is way too high for something as stupid as thinking that brain diseases are just a part of the entertainment.

Related
Warnings About My Small Town From a Local Intellectual
Nicholas Vrchoticky
I Don’t Care About the Size of Your Penis, But I Do Hate You
Ginny Hogan
This Article is About Nothing
Jimmy Wyatt
Resources