The real terror lies in the threat of an auto accident, combined with deep sea fears.

Last year, nearly 1.3 million people died in road crashes. That's 3,287 deaths per day. An additional 20-50 million people are injured or disabled. However, the US only averages 19 shark attacks each year, and just one shark attack fatality every two years. Looking at the facts, how can any logical person be afraid of the great white disappointment that is Jaws?

How am I supposed to be stricken with deep-sea terror when I know Martin Brody is more likely to die by Range Rover than shark attack? In fact, how could any reasonable person be afraid of the shark in the first place, knowing that if anything, the shark will only kill one of them, and then retreat to the deep for upwards of 24 months? Instead of staying in the statistically safe waters, the population of Amity Island flees, back to the hellish death machine that is the transportation system. 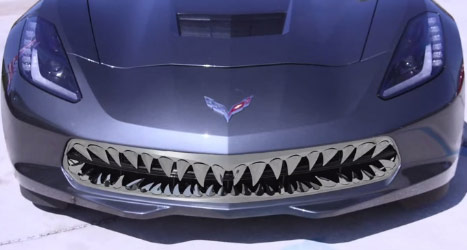 Instead of this illogical Toyotathon, I propose that the movie be remade, only this time replacing the shark itself with the 2011 Kia Rio. This subcompact car is easily more frightening than the 1,500 to 2,400 pounds of pathetic the movie currently sports. With 149 fatalities expected per million registrations, it would take Jaws 298 years to achieve those numbers, maybe 200 if you gave it a gun, but even that's pushing it.

Imagine you're out at sea taking in the beauty of the deep blue, when all of a sudden the 2011 Kia Rio leaps out of the ocean, striking your boat! With its four doors of death and failed safety inspection, there's no doubt you'd be more scared than if a twelve foot single homicide slapped itself on your poop deck. The Kia Rio could run you over, or simply explode due to poor design, while sharks can't even breathe on land, or explode! Well the Kia Rio doesn't have to breathe… it just has to kill.

A shark driving a Kia Rio, now that'd be terrifying! What with its lack of hands or general motor skills, a Great White would surely be the most dangerous driver on the road, or the sea. Sure, you'd have to fill the car with water, but with Kia Rio's poor exterior, it shouldn't be that hard to flood. I'd watch that movie, wouldn't you?

In fact, let's just cut out the middle man altogether. While sharks are terrifying to look at, the logistics just aren't there. I say we replace that aquatic speed racer with a vending machine, seeing as they kill an average of 2.18 people a year, much more than pansy sharks. We wouldn't have to fill the Kia Rio with water, and the thought of being pursued by mobile, candy-dispensing death is sure to be enough to make even the most confident man drop a fresh chocolate bomb.

But hold up, let's take a step back.

What if the vending machine dispensed tiny sharks as it drove the Kia Rio? Move over Freddy Krueger, there's a new master of nightmare in town. Now imagine all those tiny sharks have tiny guns and all the personalities of famous dictators. You feel those chills going down your spine? That's called movie gold.

And who's to say the fun has to stop there? Mix it up Spielberg!

Related
I Don’t Know If I Should Start Watching Game of Thrones, Or If I Should Let George R.R. Martin Out of This Chokehold
Ram Ray
Why You Should Only Cut to Me Laughing During This Comedy Special Taping
Kristi Iovino
How to Write About Your Anxiety Instead of Actually Dealing with It
Daniel Kozuh
Resources