The November 1st Walk of Shame

Ahh Halloween. I love it so much. The only night of the year where girls can go out in the outfits usually reserved only for the bedroom. Outfits that if parents even knew they owned would cause mothers everywhere to sob uncontrollably and fathers' heads to explode and rain down upon the ground in a flurry of rage and where-did-I-go-wrong shock.

Halloween night is like a national holiday for creepy guys. They no longer have to stand in the corner and stare at women, undressing them with their eyes. Now they just have to put on an Obama mask and stand in the corner and stare at already nearly naked girls while trying to hide their boners. The work is already done for them. You can take enough mental pictures on this one night to keep the Spank Bank full for months. It's not called "National Dress Like a Slut Day" for nothing.

The Austrian beer maiden's dress fell down and a boob popped out. Children pointed. Mothers screamed. I laughed my ass off.But in the end it's still just another night out. Sure, at the bar or house party you're attending you might see a Ghostbuster, or a Super Mario Brother, or Gumby just walking around holding a beer. But at the end of the night it's still just a group of people looking to hook up. And, oh, there will be hookups. With as many tits and ass hanging out as there are on Halloween night, the atmosphere is so sexually charged that there's a good chance you'll go to the bathroom and walk in on a Playboy Bunny getting railed by Winnie the Pooh. 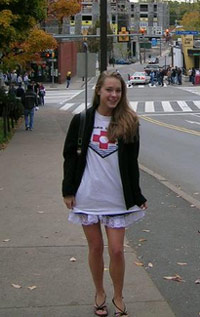 The thinly-veiled, morning-after French maid cover-up.In college I used to wake up early on the weekends and sit on my balcony with a Bloody Mary and a breakfast burrito just to watch the show. I'd take immense pleasure in seeing the girls power walking down the street with their smeared makeup, frantically calling their girlfriends, trying to figure out what happened last night. I'd whistle down to them and when they looked up at me I'd tip my glass to them as say, "Was it worth it?" And, if I was lucky, I'd see tears well up in their eyes before they'd bustle around the corner.

This year, just for a little extra schadenfraude, Halloween fell on a Saturday. That means the walk of shame happened on Sunday morning. The Lord's day. The Sabbath. And, if you're like me, you have at least one church in your neighborhood. So not only do you get to see the premiere walk of shame of the year, you get to see disapproving scowls of women in gigantic church hats as they usher their children out of the line of sight of the lecherous sinners. It's hard enough for those poor girls to deal with the humiliation of being out in public dressed like they're coming back from a fetish ball, but the look in the holy rolling eyes of those early morning church-goers could actually strip a skank of her will to live.

This year I went out onto my fire escape to watch the procession of sadness. Just as families were beginning to arrive at the church across the street from my apartment, an Austrian beer maiden came walking down the street in a tiny tiny dress. She wasn't paying attention and slipped on a wet sewer grate. She didn't fall, though—she grabbed onto a tree and steadied herself. But the back of her dress wasn't done up all the way so when she reached for the limb, her dress fell down and a boob popped out. Children pointed. Mothers screamed. I laughed my ass off.

Then a few minutes later a sexy leopard came walking the other direction in a skin tight, spotted leotard. I had to respect her, though, because she was owning that outfit. It was 10:30 in the morning and she still had the tail attached and the ears on her head. She marched past the church, head held high, with a sense of bravado and confidence. Then, just as a mother was helping her 5-year-old twin daughters in matching flower print dresses out of a minivan, the leopard stopped, leaned on the van for support, and started wretching like she was working up a hair ball the size of the balls she probably had on her chin the night before. The mother and the little girls froze and stared at this tigress convulsing on the hood of their car. There was a moment of dead calm when the wretching animal-woman and the frightened mother locked eyes. Then, like a geyser of shame, she spewed forth the remnants of the previous night's tequila, diner onion rings, and semen all over Mom's powder blue church shoes. I gave her a standing ovation.

And, finally, about an hour into the church service, three girls came around the corner. A jilted bride and a sexy devil were helping a still insanely drunk Victoria's Secret model (read: lazy whore who merely went out in lingerie) down the street. The model saw the church and… apparently wanted to repent her whorish ways. She broke away from her friends and ran into the church. Her friends, realizing they definitely were not dressed to go into a house of God, stood outside arguing about which one of them should go in and retrieve her. Fifteen minutes later she emerged, wrapped in a blanket, flanked by the minister and followed by what looked like most of the congregation. She was crying but smiling at the same time. The minister kissed her forehead and made the sign of the cross across her chest. The congregation all yelled "HALLELUJAH!!" The newly saved model hugged him and started walking down the street with a new purpose. Her perplexed friends followed behind, trying to figure out what had just happened. I was so moved by what I had just witnessed I started to cry into my Bloody Mary.

So, next year, remember to set your alarm before you go out on Halloween night. You want to wake up for this once a year event. Anything can happen. I mean, if a drunk girl in a G-string can find Jesus, there's no limit to the miracles that can happen on the November 1st walk of shame.