Problem is, I'm finding it hard to air out my grievances.

Then you take out your future lover, almost pass out while blowing her up, and after several exciting evenings surrounded by candles and Barry White music, you find that she won't hold air any longer (hell, she never even held you ONCE). You blow and blow, but she continues to lose the precious, necessary air that makes her who she is: a cheap slut born of even cheaper labor.

Now what do I do? Can I take it back to the store and ask for a refund? I was under the impression that I would get quite a bit more than a dozen usages out of the plastic cum float, so it's a little disconcerting that I have to return to that Petri dish smut box and explain my predicament. It's almost a guarantee that I'll get into an argument with the heavily pierced douchebag working behind the counter. He knows that the instructions on the box clearly advise deflating the doll when not in use, but I'm an affectionate cuddler in bed, and can't easily bring myself to terms with shelving the woman I just defiled. I want to hold and caress her sticky, plastic body until I wake up with her tits crusted to my neck in the morning.

But alas, my doll, Bulimia (as I have named her), is currently tucked away in a flaccid state under my kitchen table, and I feel as though I have no recourse for returning her. Bulimia has been thoroughly cleaned and can easily be re-boxed, but I need to figure out a way to handle this without the embarrassment of going back to that disgusting store. It took a lot of effort to go in there in the first place, and I'll be damned if I'm going to do it sober. That's how people contract gonorrhea. Well, that and getting drunk at strip club bars. 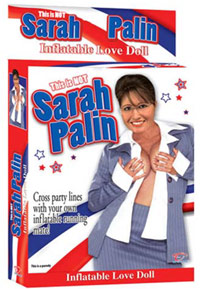 This is NOT Sarah Palin, but you won't know the difference. I guess I could always head over to Walmart and get one of those patches you put on a flat bicycle tire. But the locations of Bulimia's air leaks aren't noticeable, so if the black bike patches are visible once she's clothed, it would make her look as though she's covered in leprosy sores. Then what would my family think when they meet her? I really don't want my mother to worry, especially after that one pregnancy scare (can't a guy bring home a girl who can bury a case of beer anymore??).

I guess I could write a strongly worded letter to the manufacturer, demanding my money back. It's 2011 for Christ's sake. We have the technology to make TVs an inch thick, strike down nuclear missiles with satellites, and perform plastic surgery that makes Kim Kardashian somewhat bangable; the least we can do is find a way to manufacture a hole-proof plastic woman (well not too hole-proof, if you get my drift).

So I'm screwed. The only thing that I can do is to head back to the store and try to find myself a taut, new, sexy Bulimia. Keep your fingers crossed and your gag reflexes suppressed for me.

Related
There is Literally No Caffeine in This Espresso, And I Will Sit Here Shaking Until I Get a Refund
Dakota James
I’m an Obnoxious White Hipster Who Never Really Liked Prince, Now What?
Alex von Sternberg
I Wish Cats Would Get Depressed Like the Rest of Us (Especially Me)
G. Raymond Leavold
To the Guy Blowing Drunkenly into a Harmonica at 2:30 AM: How are You So Bad at This?
Ash Davis
Resources