Why I would make the best intern since Monica Lewisnsky.

PLEASE TELL US IN 500 WORDS OR LESS WHAT MAKES YOU UNIQUELY QUALIFIED FOR THIS POSITION.

Hey Mr. President! It's Honey Boo Boo child — remember me? You crowned me Miss Trump Hotel New York back in 2013 (photo attached)? Well, I've grown up a lot since then, and Mama says I'll be ready for my first summer job this year! 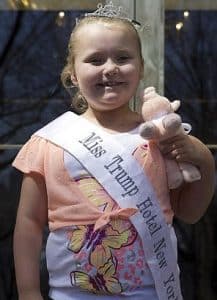 First, because I'm a winner! I have a bedroom full of trophies to prove it, and if you don't believe me, you can come over and see for yourself. Don't forget to bring a camera crew ????

Like you, Mr. President, I'll do whatever it takes to win. Have you seen the footage of my landslide victory at the watermelon eating contest? Those other losers never had a chance! When I was on the pageant circuit, I used to slam down a gallon of Go-Go juice moments before I hit the stage, and I'd be happy to mix you up a batch any time you need a pick-me-up. And at the end of the day, when it's time to relax from being President, just lay back and let me rub all your tense places–my uncle says I'm real good at it!

Second, my social networking skills are awesome. I have 135K Twitter followers and over two million followers on Facebook!  I know that doesn't make me as popular as you, Mr. President, but sheesh, I'm only eleven. I stay current on all breaking news and could give you daily briefings on the Kardashians, Brad and Angelina's custody battle, and other important World events.

Third, people love me, they really do! My irresistible Southern charm would be an asset to any West Wing, and imagine how adorable I will look on your arm, greeting guests at State dinners, when your daughter can't attend and your wife is stuck in Manhattan helping Barron with his homework.

Fourth, like yourself, if not your Vice President, I am LGBTQ-friendly. Long before it was fashionable to voice such opinions in my community, I was quoted as saying, “Ain't nothing wrong with being a little gay. Everyone's a little gay.”

Fifth, I can cook! There's nothing like a heaping bowl of sketti (my classic family recipe of spaghetti, margarine and ketchup) to warm your belly after a long day of making the best international trade deals. No need to order out for pizza when I'm around!

Sixth, I could show you how to build a redneck hot tub on the White House lawn.

Seventh, I have a fail safe plan for getting rid of ISIS, which I will share with you the day after I am hired.

Mr. President, if you give me this chance, I promise to stay away from the chicken nuggets, 'cause I know you don't like your women too chunky.  I have my own wealth, so I won't need the internship stipend–I don't even know how much it is! You can use that money to pay your Trump Tower Secret Service detail; maybe that will stop Mayor de Blasio from whining about how much you're costing the city.

Thank you for your consideration, Mr. President. I hope I'll be seein' y'all in the Oval Office real soon!

Related
Open Letter from a White Gay
Garrett Schlichte
How to Pronounce the Names of White Male Politicians
Matthew Seely
I’m an NPC in a Role-Playing Video Game and Could You Get Out of My House
Neil Tollfree
Online Job Application Tips for Zoomers, from a Boomer Ally
Ashley Chen
Resources