Don't Go to New Orleans Until You Read This

As a New Orleans travel veteran, I have seen many aspects of The Big Easy. Since Hurricane Katrina, I have made it a point to go there once or twice a year to help the economy, enjoy the people watching, and most importantly, get drunk. I recently travelled to my favorite city with a group of people who have never been there before. With a group of NO amateurs, I figured that I would become the de facto tour guide for the gang but it turned out that nobody cared about my opinion. Now that my ego has been shattered, I feel it necessary to offer up Uncle Adam's New Orleans travel tips to those of you who give a shit.

In the event that you encounter a stumbling drunken retard, it is customary to forearm the idiot in the throat and take his/her wallet. The music, culture, and art scenes are all wonderful features of New Orleans, but they pale in comparison to the several establishments that sell 100-ounce daiquiris for only $28. I'm not a math guy, but that's like $2.80 per ounce. What a deal! Sure, if you drink all 100 ounces, you will either get the shits, diabetes, or die, but for $28, isn't it all worth it?

Aside from potential death, the only problem is that the drink weighs around 40 pounds. You may want to bring some sort of strap or harness to hang it on so you don't dislocate your shoulder trying to carry around the Volkswagen-sized mug. At the very least, you should get in the gym and start working out those puny biceps of yours. 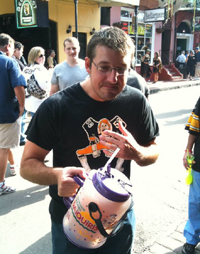 The 100-ounce daiquiri is not to be taken lightly. Not that it could be. Celebrated for its seafood and Cajun cuisine, New Orleans offers an amazing array of different culinary experiences that you can't find anywhere else in the world. For instance, Bubba Gump's on Decatur Street is a spot that no true food connoisseur should miss. Their fried mozzarella sticks are to die for and well paired with a bottle of Miller Lite. A lovely restaurant called Subway offers up a variety of different sandwiches where the customer gets the opportunity to choose their own toppings in front of the chef as he prepares the meal. It's as if you're working in the kitchen yourself!!!

The most unique local food adventure is the Lucky Dog hot dog stand, which you can find on almost every street corner at 3:00am. If you decide to select a wine pairing for your street dog, I would suggest a pinot noir, preferably from the Otaga wine region of New Zealand. The light, fruity undertones will nicely contrast the acidity of the hot dog (which you will inevitably regurgitate an hour later on your hotel comforter). Finding the correct wine on Bourbon Street at three in the morning is a slight challenge, but trust me, the aromatic scent of the puke will make you understand why the search for the perfect pinot was worth it.

Dress codes are quite lax in New Orleans. As I noticed on several of my past trips, men tend to wear jeans, sensible walking shoes, and unwashed t-shirts with phrases such as "FBI: Female Body Inspector." Really dude? Do you think you're fooling anyone? You're 5'2", bald, and weigh somewhere in the vicinity of 280. They chose you to inspect female bodies AND gave you a dingy t-shirt as your primary form of identification? Wow, I guess it really is "who you know." 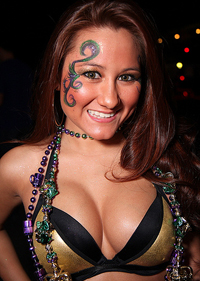 The dress code for women falls into one of two categories: 1. If you are under the age of 28, it is acceptable to wear something tight fitting and see-through (if anything at all), and 2. If you are 28 or older, you can wear whatever you want. Just make sure that you stay in your hotel room for the duration of the trip so you don't block my eye-candy.

Prostitutes and drug dealers are no longer an issue on Bourbon Street. If you are someone who appreciates the fact that the city has made an extreme effort to clean up the riff-raff, then I applaud you for being an upstanding citizen looking out for the betterment of society. On the other hand, if you need a hooker or some weed, just email me. I know a guy named Mookie who can hook you up.

Rookie drinkers can ruin an otherwise perfect evening. Tight quarters and over-imbibing can create an uncomfortable environment for some. In the event that you encounter a stumbling drunken retard, it is customary to forearm the idiot in the throat and take his/her wallet. In New Orleans, this action is considered highly flattering, and police don't frown upon it.

Decorative wrought iron balconies covered in beautiful long hanging plants line the streets of the French Quarter. The renowned architecture of New Orleans has been featured in such films as JFK, Interview with a Vampire, and The Pelican Brief. Remember the classic scene in Snow White where Doc and Sneezy were banging and Sneezy was doing that weird thing with his hip? That was either filmed on Canal Street or it was something that I remember from a heroin-induced dream. 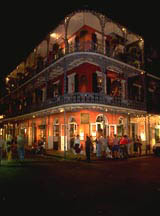 The sheer beauty of Jackson Square will bring a tear to one's eyes, mostly because of the pepper spray permeating the air from the night before. The Mississippi River, Café Du Mond, and St. Louis Cathedral all make the city of New Orleans an attraction haven for travelers, but will never compare to the 3 for 1 drink nights at Larry Flynt's Hustler Club.

When you are ready to leave town, you should probably slap on some deodorant, maybe wash your face, and definitely brush your teeth because the other folks on the plane will not appreciate the stench (trust me, they can get pretty ornery). The second you get home, I would suggest scheduling a doctor's appointment to get a blood test and tetanus shot.

I hope this advice has helped, and that you enjoy your trip to New Orleans. Give Mookie a big kiss on the cheek for me.