Even the Animals Have Turned Their Backs on You

Your pet has given you the cold shoulder, now what?

Have you noticed that your life has taken a hard left turn into the pits of hell? Your friends are no longer returning your phone calls. For months, your boss has been giving you the crappiest assignments in the office. Now, your animal companions and other members of the animal kingdom are trying to distance themselves from you. 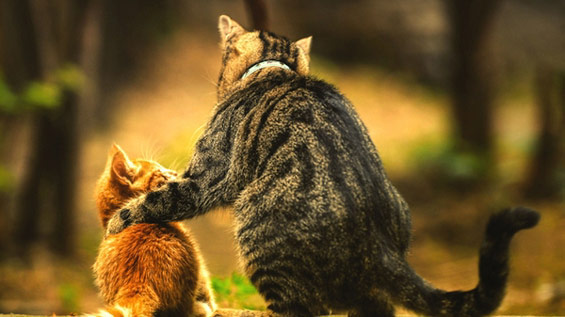 Remember when you would come home from work, and your cat and dog would greet you at the door, and snuggle up with you on the couch? Now they stare at you from across the room with a look that says, "You're dead to me now." You try to engage them by rolling a ball to them, only to have your cat swat the ball under the couch while still giving you that "steely glare." Your dog picks up the ball in his mouth, walks over to you and gives you back the ball with enough drool on it to fill the water dish that has "accidentally" turned over in the kitchen.

Could it be because you swept up all the breadcrumbs left on the sidewalk before the neighborhood birds could eat it?The squirrels have started leaving acorns all over your front steps. It's a wonder that you haven't slipped on one of them and broken your neck. The neighborhood birds have been pooping on your windshield. The bird excrement seems to spell out the word "doomsday." Or did it say "dumbass"? One wrong move with excrement and you've got a whole different meaning. You go to the zoo to forget your troubles and are soon asked to leave by the zoo caretakers. It seems that all of the animals are screeching and howling at the top of their lungs whenever you get close to their cage. You remember what happened with the neighborhood birds, and decide to stay away from the monkey house for obvious reasons. Even the raccoons are giving you "the finger" as you pass by.

As you hurriedly leave the zoo grounds before the police arrive, you go over every moment of your life, in an attempt to figure out how you got to this point. Are all these things happening to you because you stole a handicapped parking space from an elderly woman that was taking her cat to the vet? Could it be because you swept up all the breadcrumbs left on the sidewalk before the neighborhood birds could eat it? Or was it because you emptied out the neighbor's birdbath and used the water to fill up your Super Soaker water gun?

After some soul-searching, it finally dawns on you.

About three months ago, you neglected to renew your membership to your favorite animal rescue organization so that you could get that really "neat" eagle tattoo on your forearm. If that wasn't bad enough, about a month ago, you drew a moustache and an eye patch on the picture of the lion that was killed outside of his habitat. Your cat saw this and told the dog, the dog told the birds, which in turn, told the squirrels. We all know what blabbermouths the squirrels are. In no time, everyone knew what you had done. You knew that you needed to atone for your sins ASAP or face the wrath of the universe.

The next day, you renewed your animal rescue organization membership. You also gave a donation to an animal sanctuary that specializes in caring for animals that have retired from show business. The animals will occasionally put together their own production of The Lion King, just for their own amusement, to pass the time.

You're hoping that these good deeds will change your future, and that you will be able to go back to performing your satanic rituals with rubber chickens and a clear conscience. Only time will tell.

Related
Please Reconsider Me for the Role of “7-Eleven Cashier #1”
Ram Ray
I’m the Friend from a Prestige Documentary, and You’d Have Missed the Red Flags Too
Jeremy Hooper
I Am the Sticky Brown Kitchen Cabinets and All the Other Bad Choices Landlords Make with Their Rental Properties
Audrey Dundee Hannah
Resources