The following is a test. Read the story below and answer three questions at the end. You will then be told whether you may send a sample TV script to the William Morris Agency.

Tycoon Otto Rolfing once owned three sweatshops in Hong Kong, Taiwan, and Newark (New Jersey). His thousand employees worked around the clock manufacturing and stockpiling mini-skirts in anticipation of their sweeping return to fashion. Sweatshop workers were paid ten dollars a day for sixteen hours, plus meals (which consisted of rice with fish heads). Otto's general manager was Klaus Brunner, reputed cousin of Adolf Hitler. One day over a bucket of Extra Crispy Chicken with Otto, Klaus claimed that his cousin was still alive, and a fisherman in Argentina, but had totally forgotten his past life in Germany, being quite senile. “It's hard enough,” Klaus confessed, “for him to bait a hook.” Naturally, documentaries didn't raise an eyebrow. 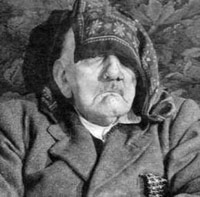 Fish are a lot more elusive than Jews apparently.Soon afterward Otto ran out of money. First to be cut off were the telephones, which really didn't matter as the phones never rang much anyway, except in New Jersey, where immigration officials called, hoping someone answered with a Mexican accent. Next to go was the gas. Again, even in New Jersey this didn't matter, except on three or four days in mid-winter when inside temperatures fell far enough to trip the thermostat, which was permanently set to 41 degrees. It was only when the power company delivered a threatening note to Otto's trailer with the euphemistically worded phrase “an interruption of service” that the end became apparent. It would have been nearly impossible to operate sewing machines in total darkness. After all, the warehouses were windowless to maintain secrecy in the event that Calvin Klein or Ralph Lauren found out what they were up to. (Even the sign outside read: “Otto's Buttondown Shirts to throw off the cops.”)

So Otto suspended operations, offering each of his employees, both male and female, a mini-skirt as severance pay. He could afford to be generous as he had manufactured, by then, enough mini-skirts for everyone east of the Mississippi, with a few left over for the West Coast as well. What he needed now was a vacation.

After selling their respective trailers, Otto and Klaus hopped a cruise ship bound for the Virgin Islands. It was then that Otto, aged 53, claimed to be a virgin—an admission more ominous than the confessions of Klaus about his cousin. As if on cue the ship then mysteriously sank somewhere between New York and Miami. To make matters worse, a terrorist, swearing he was from Iran despite his blond hair, blew holes in all the life boats but one, and with a compact grenade launcher he'd managed to smuggle on board because ship's security had mistaken it for a Duke Nukem toy.

In the water now, Klaus and Otto worked frantically to lash together the few remaining ping pong tables into a kind of raft. These, however, were quickly seized by the ship's captain, and ex performer Andrew “Dice” Clay, and magician David Blane. Then, as Klaus began complaining about circling sharks, Otto lapsed inextricably into a numb recitation of the Rhyme of the Ancient Mariner. Luckily, about then a Ouija board floated nearby, and their spirits improved immeasurably.

Unfortunately, it was noon and they couldn't distinguish east from west, and so paddled their Ouija board in the wrong direction. Soon the two crossed the 200-mile boundary into international waters (not seeing the buoys), and were instantly picked up by a surfacing Soviet sub. Not just an ordinary day-to-day Soviet sub either, but a Typhoon-class model carrying 140 warheads capable of obliterating any country within 5000 miles.

The sub's captain, an amiable if slightly nervous chap of 19, understood English well, having been kicked out of several Welsh boarding schools. Ultimately he succumbed to Otto's tale of misfortune, embellished with opinions on how citizens of the United States would eventually die from heart disease anyway. Remembering all the fast food commercials he'd seen, the young captain agreed and ordered the sub be taken to Argentina where, according to Klaus, life was easy and the fishing was good. He then permitted Klaus to use the deck cannon to scare Dice and Blane a bit.

The trio now live with Adolf in a little fishing village south of Mar del Plata, while the sub, piloted by a 20-year-old female, glides aimlessly in and out of Cape Cod, looking through the periscope for sights of Blane. Adolf himself has undergone an operation, and now resembles Mother Teresa… in a mini-skirt.

1. Does this story sound plausible to you?
2. Is your life as boring as a bowl of ramen?
3. Do you also watch Entertainment Tonight?

If you answered yes to any of these questions, send that sample script today.