Brutally Honest Marketing Copy for 13 Companies You Love to Hate

Sunny Delight: Brighten up your day with the unfamiliar taste of urine!

Uber provides a simple, reliable way to pay top dollar to be kidnapped by a serial rapist. Let any bloke off the street pick you up, throw you in his basement, cover your face in masking tape, and suppress your screams as he sodomizes you ad nauseam. Oh, and for the privilege of having your dignity stripped, you can count on Uber to automatically include a 20% gratuity.

There's a reason we serve food to customers late night through bulletproof glass: our food is murderous. Order a Castle-pack of nine burgers and some fries and expect to leave in a body bag.

Because we care enough to sell your ATM password to a Nigerian con artist who will rob you blind.

Want your own section on an Amtrak Train? Desperate for your friends and family to stop visiting? Pray every night that your wife will divorce you? Then try Tom's of Maine, an organic deodorant guaranteed to make you smell so bad you'll have no choice but to become a bearded, muttering recluse who spends all his free time collecting cans.

Sure, it's sparkling. Okay, it has a refreshing after taste. But eight dollars? Why would we charge as much as eight dollars for a single bottle of water? Let's just say our economy is in shambles. If you don't overpay for our water you're going to need to bail us out again!

Enjoy getting charged for a DVR box that refuses to acknowledge the existence of your remote control? Find it appealing for your cable box to freeze for hours at a time while you stand there and gnash your teeth and plot the destruction of our galaxy? Act now and we'll throw in internet that doesn't work and a home phone line that will enable you to be hounded all day by idiotic telemarketers who barely speak English. Plus, sign up today and lock in your $99/month rate for a full year, even if you hang yourself because of frustration with our lousy service! That's right, we won't raise your rate, even after you're dead! 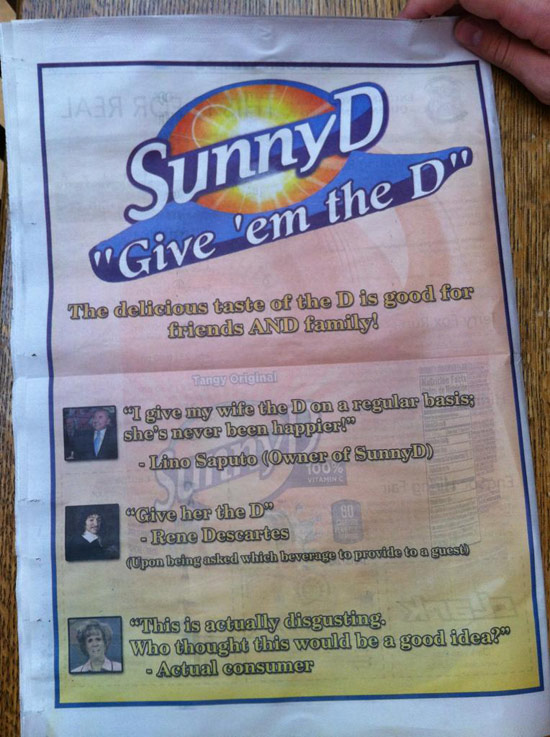 For a limited time CVS is allowing customers to freelance as unpaid employees. RING YOURSELF UP, SCAN YOUR COURTESY CARD, AND BAG YOUR OWN GROCERIES! Oh, and by the way, we're thinking of implementing a new program where you also get to plunge our toilets AT NO ADDITIONAL COST. That's right, we won't charge you a dime if you also want to work pro bono as our plumber!

Your account will be hacked. Random penis-enlargement emails will be sent to all your contacts. When you call EarthLink to complain, customer service reps who barely speak English will insist you're mentally-unstable. They'll reluctantly run through the same 46 steps they've been taught to follow in all situations, and, after you've completed this tedious process, hang up on you. You'll call back, go through the same 6-hour ordeal, only to be hung up on again. You'll call back yet again, threatening to kill everyone in their our Bombay office, tying your phone card around your neck, and randomly firing off a semi-automatic weapon in your apartment while punching yourself in the nuts. At this point they will tell you there is nothing they can do. And you thought Hotmail sucked!

Tired of the quality meats you get down at your local butcher? Feel Peter Luger's doesn't quite live up to the hype? Then try Tabasco-Spiced Slim Jims, which will burn the back of your throat and fill your gut with the refreshing taste of moldy shoe leather. This magical product will rip up your esophagus, give your stomach an ulcer, and, if you're lucky, so damage your intestines that you'll merely die of toxic megacolon.

For those who think we should have recalled those 5.2 million cars in time for Christmas…bah humbug! So some customer lost control of their car and went flying off a cliff? And? It beats getting decapitated with a samurai sword—which is what they deserved—the poseurs!

Interested in shipwreck? Thought the way the Titanic went down was cool? Long to drown in the company of your peers? Then sail one-way on The Costa Concordia 2. Bon voyage!